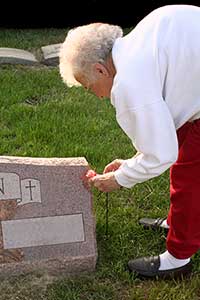 Most states have enacted a specific cause of action for wrongful death lawsuit.  For example, in Illinois, a surviving family spouse and/or family member is entitled to bring a lawsuit for the loss of the deceased services.  Although no award can truly replace your loved one, you can be compensated for the loss of support and companionship that your spouse provided.

Under the Illinois Wrongful Death Act (740 ILCS 180), a victim’s family members (next of kin – surviving spouse and children; parents and siblings can recover if there are no surviving spouse or children) can recover for damages based on the defendant’s wrongful act, neglect, or default.  The action is brought by and in the name of the deceased person’s personal representative.

In order to successfully recover in a wrongful death lawsuit in Illinois, you must prove the following:

Wrongful death damages include both pecuniary (monetary) damages for loss of support and damages for loss of consortium, loss of society, loss of companionship, and loss of guidance.  Damages can also be awarded for grief, sorrow, and mental suffering.  The damages awarded can then be reduced because of the deceased’s contributory negligence (fault) and any contributory fault by a beneficiary.

The amount recovered is for the sole benefit of the surviving spouse and next of kin and is divided based on how much each was dependent upon the deceased.  If there exists no surviving next of kin, the damages are divided to cover hospitalization costs, medical services, and the estate.  In most cases, wrongful death actions must be brought within two years after the death of the person.

Hopefully, any abuse or neglect that occurs at a nursing home can be addressed earlier in time, to actually prevent the loss of a loved one.  But, in those unfortunate situations where the death of a spouse does occur, a wrongful death action can help a family deal with the repercussions of their loss.

(740 ILCS 180/1) (from Ch. 70, par. 1)
(Text of Section WITH the changes made by P.A. 89‑7, which has been held unconstitutional)
Sec. 1. Whenever the death of a person shall be caused by wrongful act, neglect or default, and the act, neglect or default is such as would, if death had not ensued, have entitled the party injured to maintain an action and recover damages in respect thereof, then and in every such case the person who or company or corporation which would have been liable if death had not ensued, shall be liable to an action for damages, notwithstanding the death of the person injured, and although the death shall have been caused under such circumstances as amount in law to felony. No action may be brought under this Act if the decedent had brought a cause of action with respect to the same underlying incident or occurrence which was settled or on which judgment was rendered.
This amendatory Act of 1995 applies to causes of action accruing on or after its effective date.
(Source: P.A. 89‑7, eff. 3‑9‑95.)

(Text of Section WITHOUT the changes made by P.A. 89‑7, which has been held unconstitutional)
Sec. 1. Whenever the death of a person shall be caused by wrongful act, neglect or default, and the act, neglect or default is such as would, if death had not ensued, have entitled the party injured to maintain an action and recover damages in respect thereof, then and in every such case the person who or company or corporation which would have been liable if death had not ensued, shall be liable to an action for damages, notwithstanding the death of the person injured, and although the death shall have been caused under such circumstances as amount in law to felony.
(Source: Laws 1853, p. 97.)

(740 ILCS 180/2) (from Ch. 70, par. 2)
Sec. 2. Every such action shall be brought by and in the names of the personal representatives of such deceased person, and, except as otherwise hereinafter provided, the amount recovered in every such action shall be for the exclusive benefit of the surviving spouse and next of kin of such deceased person. In every such action the jury may give such damages as they shall deem a fair and just compensation with reference to the pecuniary injuries resulting from such death, including damages for grief, sorrow, and mental suffering, to the surviving spouse and next of kin of such deceased person.
The amount recovered in any such action shall be distributed by the court in which the cause is heard or, in the case of an agreed settlement, by the circuit court, to each of the surviving spouse and next of kin of such deceased person in the proportion, as determined by the court, that the percentage of dependency of each such person upon the deceased person bears to the sum of the percentages of dependency of all such persons upon the deceased person.
Where the deceased person left no surviving spouse or next of kin entitled to recovery, the damages shall, subject to the following limitations inure, to the exclusive benefit of the following persons, or any one or more of them:
(a) to the person or persons furnishing hospitalization or hospital services in connection with the last illness or injury of the deceased person, not exceeding $450;
(b) to the person or persons furnishing medical or surgical services in connection with such last illness or injury, not exceeding $450;
(c) to the personal representatives, as such, for the costs and expenses of administering the estate and prosecuting or compromising the action, including a reasonable attorney’s fee. In any such case the measure of damages to be recovered shall be the total of the reasonable value of such hospitalization or hospital service, medical and surgical services, funeral expenses, and such costs and expenses of administration, including attorney fees, not exceeding the foregoing limitations for each class of such expenses and not exceeding $900 plus a reasonable attorney’s fee.
Every such action shall be commenced within 2 years after the death of such person but an action against a defendant arising from a crime committed by the defendant in whose name an escrow account was established under the “Criminal Victims’ Escrow Account Act” shall be commenced within 2 years after the establishment of such account. For the purposes of this Section 2, next of kin includes an adopting parent and an adopted child, and they shall be treated as a natural parent and a natural child, respectively. However, if a person entitled to recover benefits under this Act, is, at the time the cause of action accrued, within the age of 18 years, he or she may cause such action to be brought within 2 years after attainment of the age of 18.
In any such action to recover damages, it shall not be a defense that the death was caused in whole or in part by the contributory negligence of one or more of the beneficiaries on behalf of whom the action is brought, but the amount of damages given shall be reduced in the following manner.
The trier of fact shall first determine the decedent’s contributory fault in accordance with Sections 2‑1116 and 2‑1107.1 of the Code of Civil Procedure. Recovery of damages shall be barred or diminished accordingly. The trier of fact shall then determine the contributory fault, if any, of each beneficiary on behalf of whom the action was brought:
(1) Where the trier of fact finds that the

contributory fault of a beneficiary on whose behalf the action is brought is more than 50% of the proximate cause of the wrongful death of the decedent, then the beneficiary shall be barred from recovering damages and the amount of damages which would have been payable to that beneficiary, but for the beneficiary’s contributory fault, shall not inure to the benefit of the remaining beneficiaries and shall not be payable by any defendant.
The trial judge shall conduct a hearing to determine the degree of dependency of each beneficiary upon the decedent. The trial judge shall calculate the amount of damages to be awarded each beneficiary, taking into account any reduction arising from either the decedent’s or the beneficiary’s contributory fault.
This amendatory Act of the 91st General Assembly applies to all actions pending on or filed after the effective date of this amendatory Act.
This amendatory Act of the 95th General Assembly applies to causes of actions accruing on or after its effective date.
(Source: P.A. 95‑3, eff. 5‑31‑07.)

(740 ILCS 180/2.1) (from Ch. 70, par. 2.1)
Sec. 2.1. In the event that the only asset of the deceased estate is a cause of action arising under this Act, and no petition for letters of office for his or her estate has been filed, the court, upon motion of any person who would be entitled to a recovery under this Act, and after such notice to the party’s heirs or legatees as the court directs, and without opening of an estate, may appoint a special administrator for the deceased party for the purpose of prosecuting or defending the action. If there is more than one special administrator appointed and one of the administrators is a corporation qualified to act as a representative of the estate of a decedent and if the compensation of the attorney or attorneys representing the special administrators is solely determined under a contingent fee arrangement, then upon petition and approval by the court, the special administrator which is a corporation shall not participate in or have any duty to review the prosecution of the action, to participate in or review the appropriateness of any settlement of the action, or to participate in or review any determination of the appropriateness of any fees awarded to the attorney or attorneys employed in the prosecution of the action.
If a judgment is entered or the action is settled in favor of the special administrator, he or she shall distribute the proceeds as provided by law, except that if proceeds in excess of $5,000 are distributable to a minor or person under legal disability, the court shall allow disbursements and fees to the special administrator and his or her attorney and the balance shall be administered and distributed under the supervision of the probate division of the court if the circuit court has a probate division.
(Source: P.A. 92‑288, eff. 8‑9‑01.)