Attorneys for Patients Injured or Killed in Nursing Home Falls 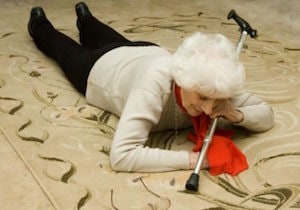 Nursing home residents are obviously at greater risk of falls than the average senior. Many residents are suffering from dementia or other memory deficiencies and have more difficulty getting around if they can at all. Other residents may have limited to no mobility, but still have the desire to move around as if they had full mobility. The rate of falls in nursing homes is understandably high. Nursing home residents are risks for falls in any facility, even those that provide the highest level of care. The risks increase exponentially when the level of oversight and care falls, as it does in a substandard nursing home.

While a resident may fall on their own, the skilled nursing facility may still be found legally responsible for the accident. If your loved one has fallen at a nursing home, it is critical to contact a lawyer to discuss whether your family may have a legal case against the nursing home. The attorneys at the Nursing Home Law Center will talk with you about your particular case and let you know whether they believe that you have a viable claim against the nursing home.

Falls are a direct cause of death for nearly 2,000 nursing home residents each year. Some falls are more minor than others. Generally 10-20% of falls at a nursing home will result in some sort of injury. Two to six percent of falls will cause some type of a fracture.

Even if a resident does not die as a direct result of the fall, it will likely have many long-term consequences if they are injured. If a resident suffers a fracture in a fall, it will further lessen whatever mobility they previously had. When a resident is further immobilized, it impacts their overall health. Residents who can no longer ambulate will see their general strength decline and they will become more frail without being able to exercise their muscles. At the same time, residents who are immobilized are at a greater risk of developing pressure ulcers that can lead to infections.

When a resident falls, it can be caused by a number of predicates. The fall can be caused by the resident’s physical condition. The resident can suffer from muscle weakness or issues with their gait. They may be attempting to get out of bed or their wheelchair to walk when they are no longer able to do so. Finally, the medications that they are taking may cause them to become disoriented and lose their balance.

Falls are not just caused by the resident’s health and balance problems. Many falls are the fault of the nursing home in some way. Some nursing homes have various hazards that increase the chance that the resident may fall. For example, the nursing home could be poorly designed or constructed such that there is a physical impediment to free movement. Alternatively, there could be poor lighting or incorrect bed height. Finally, falls may even be caused by a temporary condition such as a wet floor in the building.

One of the major causes of falls at nursing home is inadequate supervision of residents by staff at the facility. Many nursing homes simply do not have enough nurses and CNAs to provide the appropriate care for their residents. In most instances, this is a deliberate strategy in order to minimize staffing expenses and maximize profits. When residents are left unsupervised or are not adequately cared for, they will tend to try to move around on their own when they should not. For example, a resident may be assistance in using the bathroom, but may try to get up and go on their own when the necessary help takes too long to arrive.

Nursing homes are required to assess the resident’s risk of fall at all times. When the resident first moves into the nursing is the first time that the risk should be assessed. If the resident is judged to be a risk of fall, the staff must put certain interventions into place in order to help prevent falls. Some nursing homes will place restraints on a resident who is a high risk of falls. This should only be used as a last resort and the decision must be thoroughly documented.

Intervention plans can also include therapy to help a resident get stronger or walk better. Other plans include extra help and monitoring of the resident. Fall intervention plans require extra staff attention to tend to the resident. Many nursing homes cannot or will not devote the staff necessary to adequately implement these interventions. In any event, nursing homes simply cannot ignore the risk that a particular resident may fall.

The fall intervention plan is also not a static thing. In the event that a resident does fall, the plan must be re-evaluated. If any changes are necessary, then the plan must be changed accordingly. This process must occur each time that a resident experiences a fall. A pattern of falling should mean that progressively more measures are implemented in order to prevent future falls.

As mentioned above, even if the resident falls on their own, nursing homes can be found liable for the injuries that have been caused by the incident. Specifically, if the resident is unsupervised, or if there is a hazard at the facility, these are factors that can come into play during a lawsuit.

Here are some examples where nursing homes have been successfully sued for falls:

Jury Verdict for $29.1 million in California (No date given) – The resident was a 79-year old woman with Alzheimer’s. She fell and broke her hip. It took the California nursing home eight days to diagnose a hip fracture that was the result of the fall. By that time, the resident had developed a pressure ulcer that had become infected. One of the major issues when the trial went to jury was that the nursing home did not have adequate staff in order to prevent the resident’s fall. The reason why this verdict was so large was because the jury assessed punitive damages of $28 million against the nursing home.

Jury Verdict for $214,500 in Texas (2015) – The resident was assessed as a high risk of falls in large part due to balance issues. The resident suffered five falls over a two-month span. Several of those falls involved the resident hitting their head and suffering an injury. The resident died from an intercranial hemorrhage that was a result of the final fall. The resident’s family argued that the care plan should have been updated with interventions to prevent falls and it was not and that any updated instructions were not conveyed to the nurse.

Settlement for $300,000 in Pennsylvania (2017) – The resident suffered from Parkinson’s disease. He suffered multiple falls that caused further neurological injuries that ultimately contributed to his death. These falls occurred after he was moved to the dementia wing of the home. The family claimed that the Pennsylvania nursing home was aware that the resident was a high fall risk when he was moved to the dementia wing, but failed to implement proper measures given the decedent's history of falls. These included a proper care plan and updating that care plan when the resident continued to fall.

Recovery for $350,000 in Massachusetts (2015) – The resident was being moved. Procedures required that two caregivers participate in the process of moving that resident since the resident was a “total-care patient.” However, only one caregiver was moving the resident at the time. The resident fell and suffered an injury to their eye which resulted in a loss of eyesight. This took away the resident’s entire quality of life since they could not see and had to wear and eye shield. The resident died several months later.

Settlement for $300,000 in New York (2007) – The resident fell from her bed at the nursing home. The fall resulted in a hip fracture. The resident had previously suffered a broken hip from which they were recovering at the facility. The nursing home had policies about fall prevention, but the lawsuit alleged that they were not followed. The family claimed that the resident’s bed was placed in an unsafe position which in part caused the fall. In addition, the bed rails allegedly did not cover the entire bed. For more information on New York nursing homes, look here.

Call (800) 926-7565 Toll-Free for a No Obligation Consultation
Has Your Loved One Been Injured in a Fall at a Nursing Home? Get Legal Help Now

Contact the attorneys at the Nursing Home Law Center if your loved one has fallen at a nursing home and has suffered injury or died as a result of the fall. When you contact us for a free no-risk case assessment, we will let you know if we believe that you may have an actionable legal claim against the facility. You will need a lawyer to help you determine if your loved one fell as a result of the negligence of the nursing home. If so, we can help you file the claim and advocate for it throughout the entire litigation process. Call us today at (800) 726-9565.

View More ›
Case Valuation Center
Nursing Home
Negligence & Abuse
States We Serve
Nursing Home Law News - Falls in Nursing Homes
Client Reviews
★★★★★
Jonathan did a great job helping my family navigate through a lengthy lawsuit involving my grandmother's death in a nursing home. Through every step of the case, Jonathan kept my family informed of the progression of the case. Although our case eventually settled at a mediation, I really was impressed at how well prepared Jonathan was to take the case to trial. Lisa
★★★★★
After I read Jonathan’s Nursing Home Blog, I decided to hire him to look into my wife’s treatment at a local nursing home. Jonathan did a great job explaining the process and the laws that apply to nursing homes. I immediately felt at ease and was glad to have him on my side. Though the lawsuit process was at times frustrating, Jonathan reassured me, particularly at my deposition. I really felt like Jonathan cared about my wife’s best interests, and I think that came across to the lawyers for the nursing home. Eric
View More
Submit a Law Firm Client Review