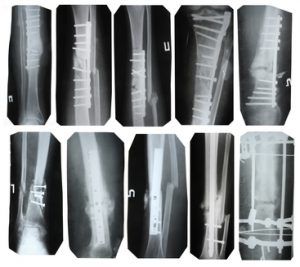 Many elderly people are no longer the same after they have suffered a fracture. They may require multiple surgeries that help hasten their physical decline. While not every fracture is the direct fault of the nursing home where it occurred, you should learn more about the circumstances of the fall to see if the nursing home is to blame.

You will want to enlist an attorney to help you with this. At the Nursing Home Law Center, we help families whose loved ones have been injured at a skilled nursing facility when the nursing home did not fulfill their duty to care and supervise the resident. We are not afraid to take the gloves off and go after the nursing home where your family member was hurt if we think that they may be at fault for the injury.

Nursing home fractures can happen in a variety of different circumstances. Bear in mind that many elderly residents will suffer from osteoporosis and may be at a higher risk for fracture. The nursing home will invariably argue that the fracture may have occurred anyway due to the resident’s weakened body. However, their negligence may still be to blame for the injury. Here are some circumstances in which fractures may occur:

Nursing homes have many different obligations in order to prevent conditions from occurring that lead to falls. The most important obligation that they have is to exercise due care in order to tend to and supervise the resident. In many cases, this will mean that the nursing home has adequate staff on hand to provide care for the resident.

Many of the accidents and hazardous conditions occur at nursing homes that do not have enough staff, stretching their existing staff too thin. In some instances, residents will injure themselves when they are attempting to get themselves to the bathroom since staff has not answered a call button. Nursing homes owe a duty of care to their residents and, if they fail to uphold this duty, they will be held responsible.

What Happens After a Fracture

The most common type of fracture at a nursing home is a broken hip. This will require surgery to repair, exposing the resident to an entirely new set of risks as they attempt to recover from the surgery. Many nursing home residents are a shadow of their former selves after they suffer a broken hip. Once the resident has suffered a fracture, they will likely need additional medical care for the rest of their lives. They will also be more susceptible to breaking the same bone another time.

When a nursing home resident loses their mobility, it has effects far beyond just the physical. It can also affect the emotional well-being of a senior. Beyond that, residents who are more sedentary are also at risk of other illnesses as well as pressure ulcers if the nursing home staff does not take proper care to shift their position. A 2002 study found that nursing home residents were 15 times more likely to be hospitalized in the first month after their fracture than other residents. This number rises to 31 times more likely if that first fracture was a broken hip. Even three to twelve months after a fracture, the rate of hospitalization is still elevated.

What You can be Compensated For

When a nursing home resident suffers a fracture in a fall, most of the compensation will derive from their pain and suffering. If your loved one has lost some of the quality of their life, that is something for which the family can be financially compensated. Even if the resident died shortly after the fracture, the fact that your loved one ended their life in pain is something for which the nursing home can be held financially responsible. If the resident dies as a result of the fracture, either directly or indirectly, then the nursing home can be sued for wrongful death as well.

Has Your Loved One Suffered a Fracture While at a Nursing Home? Get Legal Help Now

Contact the attorneys at the Nursing Home Law Center to discuss a possible legal action against the nursing home where your loved one was injured. We can advise you whether we believe you have a cause of action against the nursing home for their actions or inactions that may have caused the incident. The initial consultation is free and if we end up representing you, we will provide you and your family with wise and aggressive legal representation. Call us today at (800) 926-7565 to start discussing your case with us.

View More ›
Case Valuation Center
Nursing Home
Negligence & Abuse
States We Serve
Nursing Home Law News - Fractures
Client Reviews
★★★★★
Jonathan did a great job helping my family navigate through a lengthy lawsuit involving my grandmother's death in a nursing home. Through every step of the case, Jonathan kept my family informed of the progression of the case. Although our case eventually settled at a mediation, I really was impressed at how well prepared Jonathan was to take the case to trial. Lisa
★★★★★
After I read Jonathan’s Nursing Home Blog, I decided to hire him to look into my wife’s treatment at a local nursing home. Jonathan did a great job explaining the process and the laws that apply to nursing homes. I immediately felt at ease and was glad to have him on my side. Though the lawsuit process was at times frustrating, Jonathan reassured me, particularly at my deposition. I really felt like Jonathan cared about my wife’s best interests, and I think that came across to the lawyers for the nursing home. Eric
View More
Submit a Law Firm Client Review