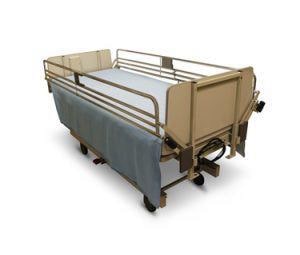 Bed rail entrapment is a relatively rare injury occurring in nursing homes. However, any entrapment risk could be deadly, and nursing home residents are more likely to die when it happens.

Getting trapped between the bed rail and the bed frame could lead to asphyxiation and strangling to death. In many incidents, the resident was severely injured when the facility failed to follow established protocols on using restraints and bed rails.

Many nursing facilities have outdated and illegal bed rail systems that present an additional risk to the resident. Although this section deals generally with entrapment, it will also cover other injuries and deaths related to bed rails, such as falls.

Skilled nursing facilities must appropriately choose the best type of bed rail for each resident. It is not a one-size-fits-all proposition. When a resident is injured by bedrail entrapment, there is a strong chance that the nursing home staff has either done something wrong or has acted negligently.

Did your loved one suffer injuries or die from a bed rail entrapment problem? If so, our attorneys can take immediate action against the facility. Let us review your case and gather evidence to prove your compensation claim.

According to the FDA (Food and Drug Administration) and the U.S. Consumer Product Safety Commission (CPSC), the use of bed rails in hospitals and nursing facilities has led to severe injuries and death. Many of the reports involved falls and entrapment.

Bed railing cannot be used in every situation in a nursing home or hospital setting and can never be used as a restraint. Not all bed rails are compatible with every mattress. When misused, they pose a significant hazard to the mobile he challenged and those with altered mental status, including delirium and dementia.

What Are the Alternatives to Bed Rails?

The FDA (Food and Drug Administration) recommends other bed rail alternatives, including lowering the bed frame, adding foam bumpers, or roll guards. Some nursing facilities use concave mattresses to reduce the potential of rolling off the bed.

Nursing facilities often violate federal and state laws if they use bed frame side rails instead of monitoring or supervising residents. Bed railing poses a high risk of the patient falling or becoming entrapped.

What is Bed Entrapment?

Older, frail, and infirm adults are at risk of bed entrapment when the nursing facility installs bed railing or improperly fitted grab bars. The victim can easily become trapped between the bed frame and the side rail when openings or gaps are large enough to entrap their chest, head, or neck.

When Should Bed Rails Not Be Used?

According to the FDA (Food and Drug Administration), nursing homes must follow Centers for Medicare and Medicaid Services (CMS) guidelines when using bed rails for their patients. The nursing staff and doctors must carefully assess patients with severe medical and mental conditions, including incontinence, sleeping, memory, uncontrolled body movement, and pain, along with those who cannot walk safely without assistance.

The nursing facility must ensure that the resident is an appropriate candidate for bed railing that should never be a substitute for needed monitoring, especially for individuals with a high risk of falls are entrapment.

According to the FDA (Food and Drug Administration) and U.S. Consumer Product Safety Commission (CPSC), installed bed railing might be extremely dangerous to nursing home residents. The staff and doctors must follow established regulations in treating elderly patients in nursing facilities and hospitals.

The FDA revealed that half of all reports on bed railing accidents involve wrongful death, and over 4000 facility residents receive treatment and local emergency rooms for bed rail injuries annually. Many of these injured in deceased victims were found lodged between the bed frame and the railing.

How Do You Prevent Bed Railing Injuries?

If you visit your loved one or family member in a nursing home, check to ensure that the staff professionally installed the bed railing to ensure it is safe to use. Push the bed mattresses as far away from the rails as possible to see if you can stick at least four fingers between the mattress and rails.

If you can, the distance between the rails and the mattress makes the bed railing unsafe to use. Many bed rails are installed, disassembled, and reassembled in nursing facilities, leading to the wrong mattress on the wrong bed, creating a dangerous scenario.

When Are Bed Rails Used in Hospital Beds For Elderly Patients?

It might be impossible for some home Health Care patients to move independently without assistance. However, many mobility-challenged patients believe they can move about on their own.

Accordingly, they will try to get out of bed but will fall and suffer injuries. In other instances, the resident might have dementia or Alzheimer's and tend to get out of bed and wander, subjecting them to various dangers.

When this happens, there might be a need for intervention to reduce the risks to resident safety.

The Centers for Medicaid Services (CMS) has issued guidance for bedrails. Side rails might not be used as restraints unless it is necessary to treat a particular medical condition. Raised side rails typically act as a restraint for residents because they tend to keep the resident in bed more often.

For that reason, homes must have a valid reason to use side rails. Not only are they a restraint, but they also increase the risk of entrapment and other serious injuries.

Bedrails can be used to help a resident get into and out of bed. Subject to documentation and assessment, there are beneficial uses for them, provided that is not used without the proper justification. The use of restraints needs to be documented.

Many examples of nursing facilities receive health citations on their Medicare inspection reports because they have used bed rails without justification.

Some of the factors that nursing facilities should consider when selecting a bed rail for the resident include:

Nursing facilities must consult with the resident's physician as well as the family before making this decision. Selecting bedrails is not just something that can be done without any forethought and consideration.

Bedrail entrapment will usually get reported to the Food and Drug Administration (FDA), as the relevant Government regulator overseeing bed rail use. The Centers for Medicare and Medicaid Services also oversees the use of the bedrails in skilled nursing facilities, while the actual product is considered a medical device.

There were over eight hundred incidents between 1985 and 2009, where nursing home residents or hospital patients were entrapped. Nearly 400 individuals died in over one 135 were injured in bedrail incidents.

Statistics reveal that residents are more likely to die than not when they experience bedrail entrapment. Exacerbating the injury and fatality rates is that nursing home residents are frail and might not be able to dislodge themselves when they are trapped in the manner that a healthy person would.

Separately, there are also reports to the Consumer Products Safety Commission. From 2003 to 2012, there were 143 deaths from bedrail entrapment. An overwhelming majority of these deaths occurred in those over the age of sixty.

When a Resident is Trapped Between a Mattress and Bedrail

Falls are another deadly thing that occurs. Residents could attempt to climb over the bedrails to get out of bed. Dropping off a high bed and falling on their heads or hurting their necks could cause horrific or deadly consequences.

The potential risks of injury become more pronounced when the resident is disoriented for whatever reason.

There are several theories under which a nursing facility can be found liable for bed rail entrapment injuries.

Nursing home fined in Minnesota – There were media reported that a resident asphyxiated when her head was caught between the mattress and a grab bar. The facility did not have a policy about the size of mattresses and bed handles to reduce bed rail entrapment risk.

The resident was found face down in her bed and not breathing. The state recommended that a fine be assessed against the operator.

Lawsuit Filed in Vermont – A ninety-five-year-old woman died when her head became trapped between her bed rail and an air mattress. According to the lawsuit, the death was caused by an improper bed height, the facility's failure to re-evaluate bed choice based on changes to the resident's health, and an understaffing of the facility on the night that the resident died.

The facility defended their actions by noting that the death certificate stated that the resident fell, although Vermont's state cited the home for bedding violations.

Nursing home fined in Pennsylvania – An eighty-nine-year-old man died when his neck became trapped in the bedrails. The resident was found on the floor with their neck trapped between the mattress and the rails.

The nursing home received a substantial fine in connection with this incident.

Jury Verdict for $300,000 in California (2006) – The resident, whose bedrails had a history of defects, was found dead on the floor of her room. There was no concrete evidence that the resident had suffocated, and no autopsy was performed.

Nevertheless, the jury found the nursing home responsible for the death and awarded three hundred thousand dollars to the resident's surviving family members.

Settlement for $570,000 in Illinois (2009) – The resident was found with her head trapped between the bed and the bedrail. The family filed a wrongful death lawsuit claiming their family member was trapped when the nursing home staff has put bedrails on her bed unnecessarily. The woman asphyxiated.

Has Your Loved One Been Injured in a Nursing Home by Bedrail Entrapment? Talk with an Attorney Now

The Elder abuse attorneys at the Nursing Home Law Center can get the justice your family deserves. Our lawyers will handle every aspect of the process to obtain a financial settlement through a negotiated settlement or jury trial award.

Contact our law firm today at (888) 424-5757 (toll-free phone call) or through the contact form to schedule a free consultation. All discussions with our nursing home abuse lawyers remain confidential through an attorney-client relationship.

Please do not send sensitive information to our injury lawyers through voicemail, email, or text message.