Severely dehydrated nursing home residents could suffer catastrophic injuries or other disorders. Most cases of inadequate hydration are preventable if the nursing personnel follow established protocols in providing care.

When a nursing home resident doesn't get sufficient liquids serious injuries or even death can result. Our law firm appreciates these dangers and prosecutes nursing home negligence cases involving dehydration and malnutrition.

As with all our nursing home abuse cases, we handle dehydration lawsuits involving nursing homes on a contingency fee basis where we only receive a legal fee when there is a recovery for you. 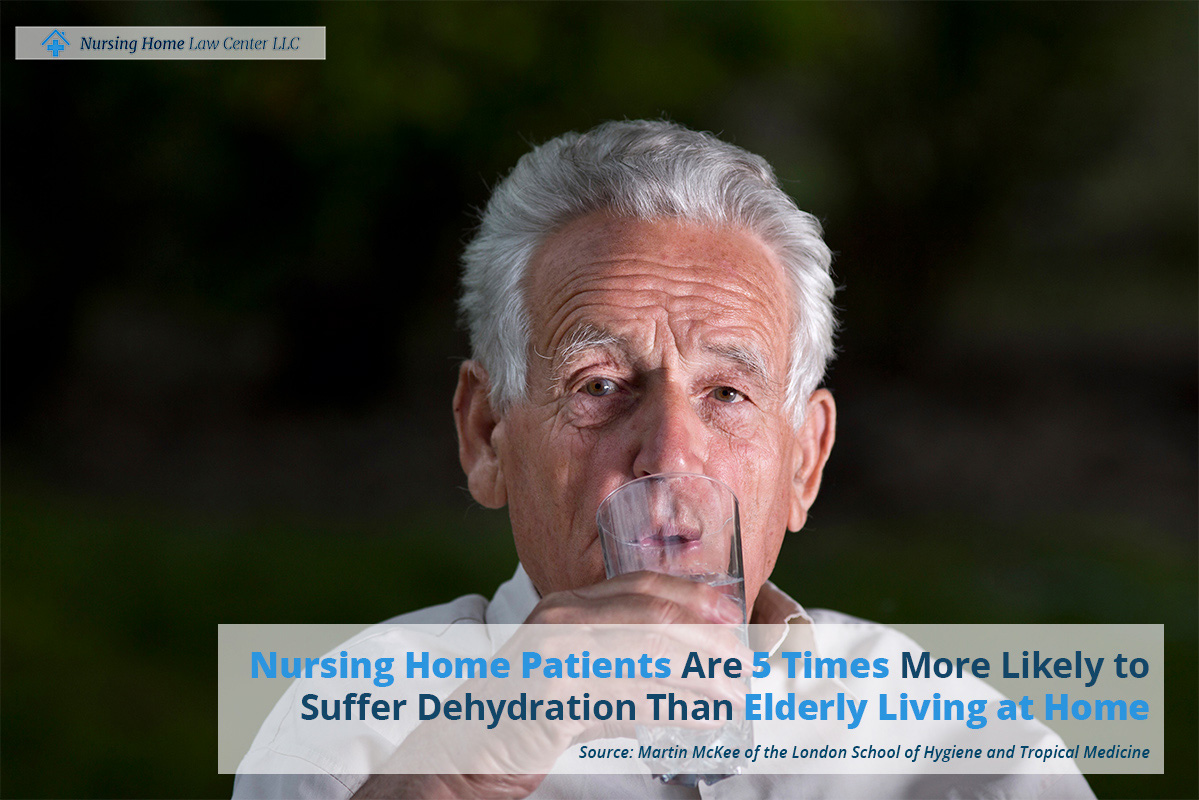 Did your loved one suffer an injury or die from dehydration or malnourishment at one of the local nursing homes? If so, the personal injury attorneys at Nursing Home Law Center LLC can help you hold the facility accountable in a court of law.

We have years of experience handling negligence cases, helping families who have had loved ones suffer severe injuries. 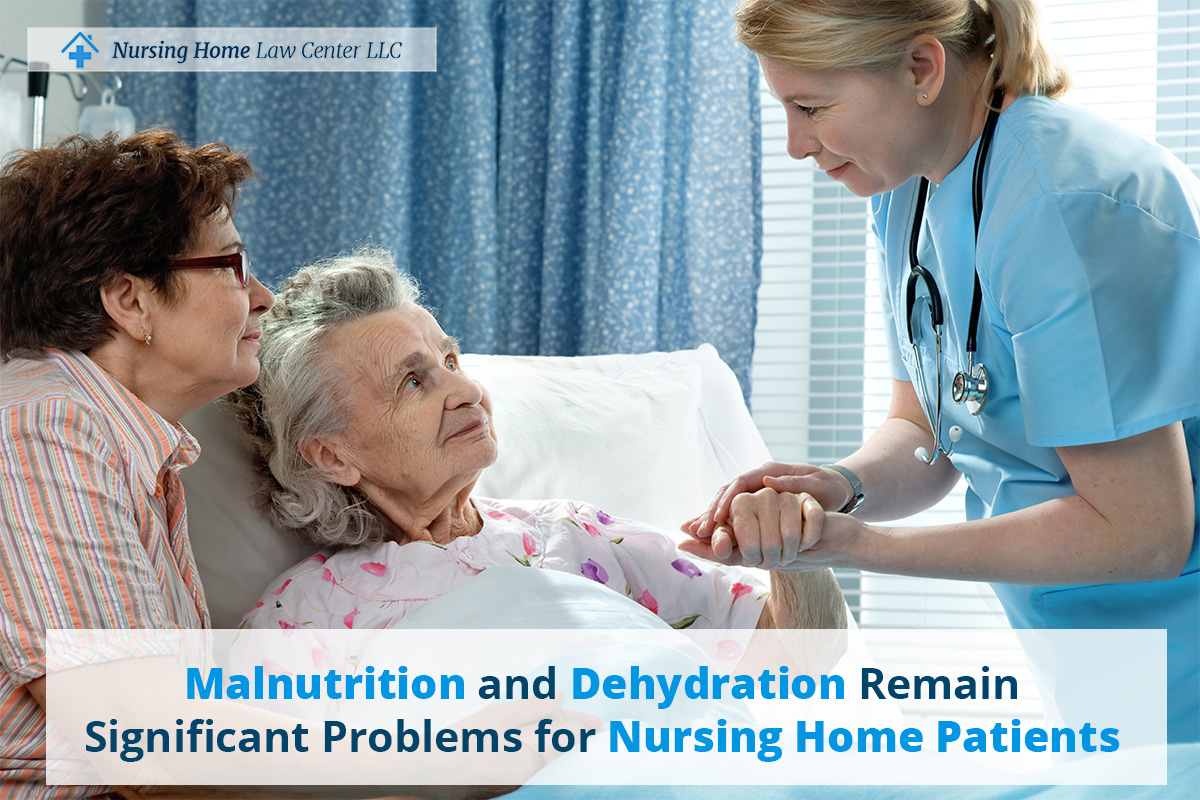 Studies show that those who reside in long-term care facilities are far more likely to become dehydrated than seniors who reside at home.

A research survey in the United Kingdom showed that seniors admitted to hospitals from nursing facilities were five times as likely to have a high salt level that indicates inadequate fluids and water intake.

This trend is not just limited to the U.K. It is estimated that around half of nursing home residents suffer from some degree of inadequate nutrition.

How Dehydration Occurs in Elderly Residents in Nursing Homes

Several different factors could produce dehydration in nursing home residents. Those with dementia or other cognitive disabilities might often forget to drink water

Understaffing or patients at local nursing homes who do not have visitors might not have anyone around to ensure they drink sufficient water to remain hydrated.

Alternatively, mobility-challenged residents who cannot use the bathroom unassisted might be too afraid to drink water if they cannot control or bladder.

Usually, these cognitively able residents consciously avoid drinking because they are aware of the possible result.

Dehydration is a critical problem when the nursing staff fails to offer residents sufficient help in using the bathroom in time. Finally, residents might not have the verbal abilities to articulate themselves and ask for water when thirsty.

Many of their residents suffer the life-threatening consequences of dehydration and other illnesses caused by neglect. In some cases, the staff will provide care by leaving a cup of water on the resident's table without ensuring that they drink it. 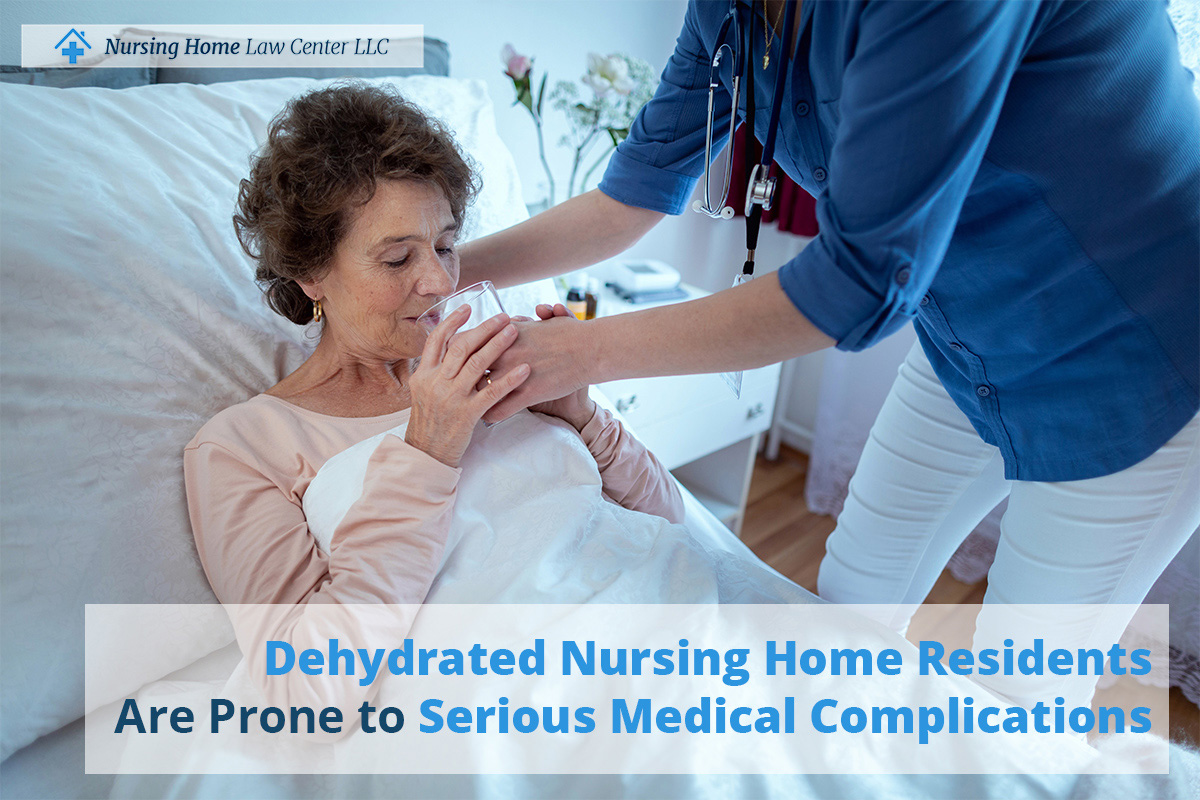 The Consequences of Dehydration and Malnutrition in the Elderly

Dehydration on its own can cause severe health problems. It can also be a contributing factor to other health issues. For example, a lack of proper hydration can affect the strength of the skin.

Severely dehydrated patients are more prone to experiencing skin breakdown. Poorly managed skin and the staff's failure to continuously reposition the immobile patient could lead to the development of pressure sores (bedsores).

In some cases, it is difficult to tell if dehydration or skin breakdown was the cause of a debilitating, life-threatening pressure wound.

Dehydration can create severe medical conditions that might include:

Nursing facilities must take the proper steps to ensure that its residents continuously drink and hydrate. Any failure to keep a patient hydrated could be considered medical malpractice.

Healthcare providers should receive training to identify dehydration symptoms such as dry mouth, confusion, and dry skin. Often, when dehydration progresses to the later stages, there will be symptoms that include low blood pressure, delirium, and unconsciousness.

A lack of sufficient water can cause a resident to suffer from dehydration and make it difficult for staff members to help the nursing home patient recover.

Dehydration does not just happen at mealtimes but throughout the day when the patient should be drinking water and liquid beverages to stay hydrated.

Overcrowded facilities and understaffing lead to a lack of supervision and proper medical care that could compromise the resident's health. 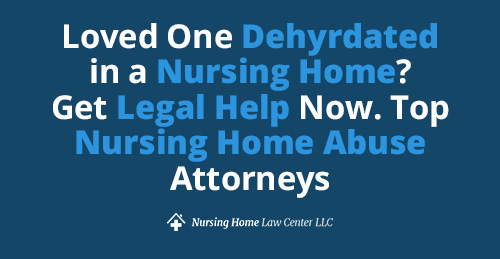 Below are some frequently asked questions related to dehydration in nursing homes raised by families facing an episode of acute injury or death. We recognize that many of these questions may give rise to additional questions or concerns.

Consequently, should you have additional questions about dehydration in nursing homes involving your family member, contact our legal team today for a free consultation.

How Long Does It Take to Recover from Severe Dehydration?

According to Johns Hopkins University, the length of time it takes to recover from dehydration depends on the patient's underlying health conditions and what caused a lack of fluids. Chronic dehydration is a severe medical problem that cannot be ignored.

What to Do When an Elderly Person Is Dehydrated?

What Are the Five Symptoms of Dehydration?

During severe dehydration, the patient's plasma levels will decrease as the heart works more because of a decline in cardiac output. Even the brain must reboot to avoid memory problems, fainting spells, and confusion.

A lack of sufficient fluids could affect the skin's ability to produce sweat and bring about kidney damage while the body retains water.

Can Dehydration Cause Injury?

According to the Mayo Clinic, dehydrated nursing home residents could suffer various severe complications without immediate medical treatment. A loss of sufficient fluids due to exercise, illness, or hot weather might lead to:

What Organs Are Affected by Dehydration?

Many dehydrated nursing home patients will experience lightheadedness or dizziness due to prolonged or severe dehydration as the body responds to depleted cardiac output.

How Much Water Does It Take to Rehydrated?

Staying hydrated is not a difficult problem. The nursing staff could ensure that consuming water and liquids is part of the resident's daily routine. The resident could consume water through drinking or alternative substances, including fruits and vegetables and flavored water beverages.

Medical scientists do not recommend consuming alcohol, milk, soda, or coffee as a water alternative. The nursing staff should monitor and track the resident's intake of water and look for any obvious signs of dehydration.

Over hydrating could also cause problems by diluting needed minerals that might be expelled through the kidneys. 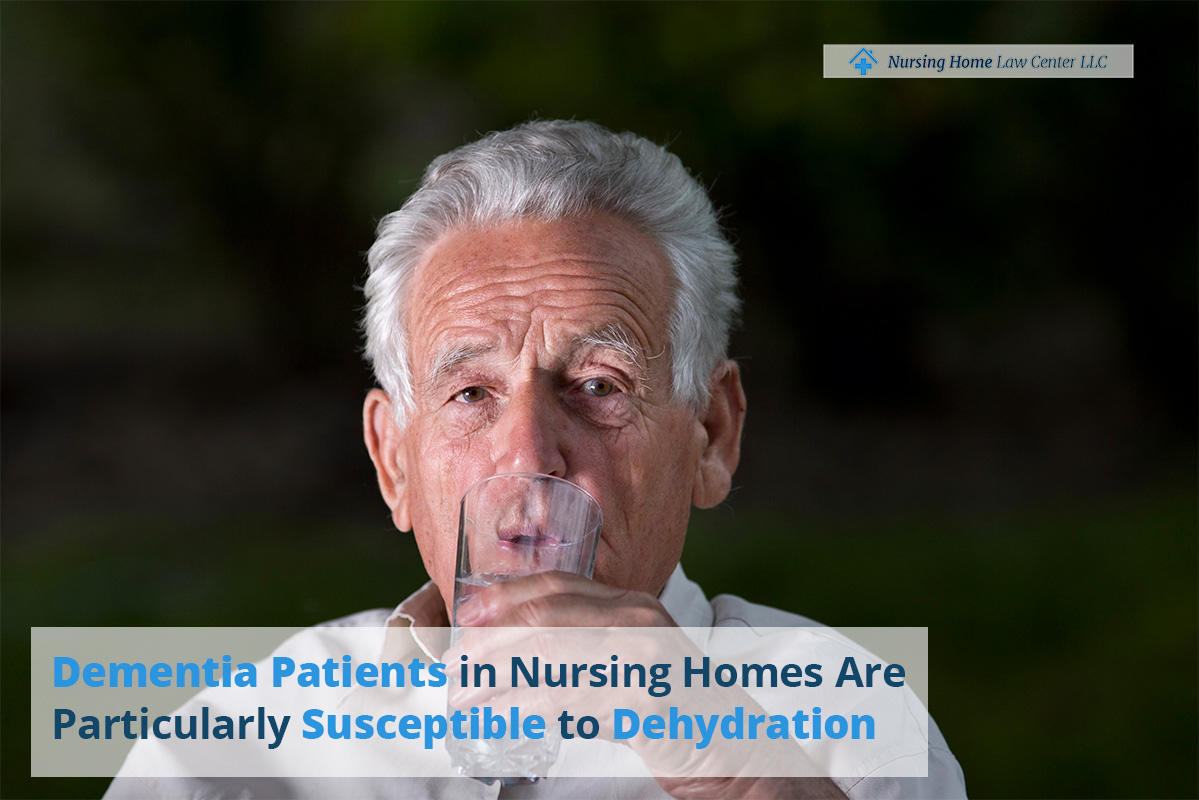 Recent cases where victims received financial compensation for injuries suffered by nursing home dehydration. If you have questions related to a situation involving your loved one, contact a nursing home negligence lawyer affiliated with the Nursing Home Law Center:

A nursing home patient was admitted to the hospital three separate times for dehydration. Each time, the hospital was able to treat the dehydration (due to inadequate fluid intake), but the family argued that the repeated instances of dehydration made the resident's other health conditions worse.

A thirty-nine-year-old patient in a persistent vegetative state lived in a nursing home during a heatwave when the air-conditioning stopped working.
The facility handled the hot air by leaving the door open to get air in the resident's room, resulting in the patient developing severe dehydration. The family argued that the facility was more interested in maximizing profits instead of adequately staffing the nursing home to treat the residents.

A patient with varying ailments, including renal insufficiency, became severely dehydrated after arriving at an Illinois nursing facility. His dehydration exacerbated his kidney condition and ultimately led to his death.

A resident died from a combination of pressure ulcers, malnutrition, and dehydration. The lawsuit claimed that the medical facility failed to train and oversee the staff adequately to provide proper care. Jurors found the facility liable for the plaintiff's damages.

Jury Verdict for $6.5 million in Ohio

A patient was admitted to an Ohio nursing facility after suffering a stroke. While there, the resident became dehydrated, suffering from kidney damage that ultimately led to his death.

The wrongful death lawsuit claimed that the facility caused the resident's death by failing to keep him adequately hydrated. The SNF claimed that his dehydration was caused by diarrhea after he had already left the facility.

Jury Verdict for $1.75 million in Texas

This nursing home neglect case involved the facility's failure to care for the resident-led to pressure sores and severe dehydration that caused the resident's death.

Has Your Loved One Suffered From Dehydration While Residing at a Nursing Home? Speak to an Attorney Now

Has your family member suffered injuries or died from dehydration in a nursing facility, the elder abuse attorneys at Nursing Home Law Center have years of experience resolving complicated abuse and neglect cases.

Contact our law firm today at (888) 424-5757 (toll-free phone call) or through the contact form to schedule a free consultation.

Then, working with you, our abuse and neglect lawyers will outline the next steps you would need to take to receive financial compensation for your loved one's injury.

All discussions with our law firm remain confidential through an attorney-client relationship. 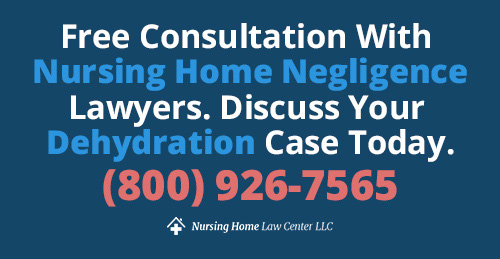