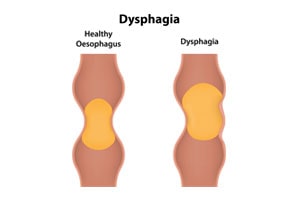 While some choking accidents in nursing home patients are unavoidable, the overwhelming majority of these incidents at nursing home arise through some sort of oversight of the facility. Residents can choke for any number of reasons, and many of the occurrences can be prevented with the proper level of care and supervision. There are various conditions that make nursing home residents a higher risk for choking.

The attorneys at the Nursing Home Law Center have a long track record in holding nursing homes accountable for any injuries or wrongful deaths that have been caused by negligence of nursing homes. Unfortunately, nursing homes sometimes will not take the proper care of their residents for whatever reason. If that happens, and you loved one suffers injury, reach out to us so we can help.

Why do Residents Have Trouble Swallowing?

Elderly or infirm patients will often have difficulty swallowing. Many nursing home residents suffer from Presbyphagia. This is a naturally occurring condition as a resident ages. This is not so much a swallowing deficiency as it is an aging of the swallowing mechanism. In general, swallowing will occur more slowly as a person ages. At the same time, the opening of the upper esophageal sphincter diminishes, making swallowing more difficult. The muscles that facilitate the swallowing weaken as they age. Choking is the fourth-leading cause of accidental death among nursing home residents.

Beyond stroke damage and other neurological conditions, there are various other ways that a nursing home resident could choke. Nearly all of them involve some kind of negligence or lack of supervision on the part of nursing home staff.

The Dangers of the Nursing Home Dining Room

The dining room at the nursing home requires a great deal of supervision. Residents need varying levels of assistance when it comes to eating. Some residents need to have their food cut and fed to them. However, there are many descriptions in the reports of nursing home inspections that detail situations in which a small amount of staff are sitting in the dining room while the residents are left to fend for themselves.

Some reports even describe the staff members texting on their phones while the residents struggle to eat. In those situations, residents are a high risk for choking. Oftentimes, this results from lack of adequate staff at the nursing home as the facility cuts the staff level to a bare minimum to keep profit levels high.

Some occurrences of choking have resulted from the fact that staff was not present when the resident began to choke. By the time that the resident was discovered choking, it was too late to save them. Choking can also lead to brain damage due to the oxygen deprivation. This can hasten a resident’s death.

All staff members must be properly trained in how to save a choking resident. Nursing homes may attempt shortcuts to save money, such as not properly training their staff. When a resident is choking, nursing home staff cannot waste time to find someone who knows how to perform the Heimlich Maneuver. Many instances of choking deaths could be avoided if the first staff member to respond had properly performed the Heimlich maneuver.

There have been some incidents where staff simply brought the resident their meal in their room and left it there. Not every resident is able to eat independently. When a resident with Presbyphagia or other neurological damage eats on their own in their bed, their risk of choking increases.

Nursing homes have an obligation to tailor a resident’s diet to their individual needs. This means that an assessment on the resident must be performed when they first enter the nursing home, and it should be updated as necessary. Then, the diet must be designed to accommodate the individual resident. One of the factors considered is the resident’s ability to chew their food. Some diets must consist of pureed food because the resident is not able to chew their own food. Other diets come with the instruction that a staff member must cut the resident’s food into small pieces or help feed it to them.

The consequences for failure to act properly when it comes to choking risk can have consequences for nursing home on multiple levels. Inspections carried out on behalf of the federal government will test for compliance with federal regulations with regard to diet and nutrition. One of the things that is tested is whether the nursing home provided the proper diet and supervision.

Lawsuits Against a Nursing Home for Choking

Here are some instances in which a nursing home has been successfully sued for choking injuries sustained by residents.

Jury Award in 2016 for $1 million (New York) – The resident was an 82-year old man who required dentures. However, the nurse forgot to put the man’s dentures in his mouth. Then, the nurse fed him a sandwich. The man’s diet dictated that he only be fed pureed food and not foods such as sandwiches. The resident choked to death within minutes. The New York nursing home accepted liability for his death. After the family was awarded damages, the nursing home sued the family for unpaid fees from the man’s residency at the nursing home.

Settlement in 2017 for $875,000 (Illinois) – The resident suffered from a condition that made him more prone to choking. The doctor’s orders were for the resident to be fed a diet of “mechanical soft food.” He was also not to be fed unsupervised. The Illinois nursing home did not follow the doctor’s orders and the nurse simply left the resident to eat his food alone. He choked and died. Even when the resident attempted to hit the call button to get help while he was choking, there was no response from the staff. When he finally received attention, the CNA failed to correctly perform the Heimlich maneuver.

Lawsuit Filed in New York (2018) – The resident was a non-verbal special needs patient who could not eat on his own. He required supervision when eating and for staff to cut his food into small pieces. Staff fed him a large meatball and failed to supervise him or cut it into small pieces. Then the staff failed to provide the resident with the appropriate intervention and care when he was choking, leading to the resident’s brain death. He died eight days later from his injuries.

Settlement for $215,000 in Pennsylvania (2017) – The resident was eating breakfast and began to choke. The resident was slumped over in his wheelchair, yet the staff failed to notice. After the resident was found without a pulse and discolored, the emergency responders removed a large piece of food from his throat. The resident died. This lawsuit focused solely on the nursing home’s response, or lack thereof, as opposed to the staff feeding him foods that caused him to choke. The PA nursing home allegedly did not have a crash cart in the dining room, which further impeded any attempts to save the resident.

Settlement for $962,500 in Massachusetts (2017) – The resident had choked on two prior occasions, but the family was not notified that it had happened. The resident required assistance and supervision in order to safely eat. Here, the resident was left unsupervised. The resident had a large piece of meat lodged in his throat and choked. Staff was not able to successfully perform the Heimlich. The lawsuit alleged that the MA nursing home needed to have a heightened level of care, or at the minimum followed the care plan since he had the two prior incidents.

Has Your Loved One Choked While at a Nursing Home? Get Legal Help Now

If your loved one has choked and suffered injury or death at a nursing home, it could very well have been an avoidable injury. As you can see above, nursing homes that exercise the proper level of care and supervision greatly reduce the occurrences of choking in their facilities. The attorneys at the Nursing Home Law Center can help you investigate the circumstances surrounding the incident that injured your loved one and help you file a lawsuit. If your lawsuit is successful, your family can be compensated for the harm that your loved one has suffered. Call us today at (800) 726-9565 to find out how we can help you and your family.

View More ›
Case Valuation Center
Nursing Home
Negligence & Abuse
States We Serve
Nursing Home Law News - Choking Accidents
Client Reviews
★★★★★
Jonathan did a great job helping my family navigate through a lengthy lawsuit involving my grandmother's death in a nursing home. Through every step of the case, Jonathan kept my family informed of the progression of the case. Although our case eventually settled at a mediation, I really was impressed at how well prepared Jonathan was to take the case to trial. Lisa
★★★★★
After I read Jonathan’s Nursing Home Blog, I decided to hire him to look into my wife’s treatment at a local nursing home. Jonathan did a great job explaining the process and the laws that apply to nursing homes. I immediately felt at ease and was glad to have him on my side. Though the lawsuit process was at times frustrating, Jonathan reassured me, particularly at my deposition. I really felt like Jonathan cared about my wife’s best interests, and I think that came across to the lawyers for the nursing home. Eric
View More
Submit a Law Firm Client Review