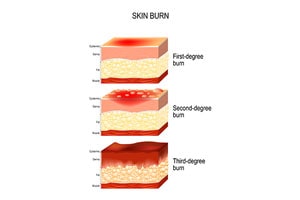 Nursing homes must safely maintain their facility, including following proper measures to prevent fires and evacuating residents during fire emergencies.

If nursing homes fail to protect a resident who suffers a severe burn injury, they can be found liable in a nursing home neglect lawsuit.

When your family member suffers burns in any incident, the skilled nursing facility can be held liable.

The personal injury attorneys at Nursing Home Law Center LLC can help prove that the facility was at fault for the burn injury. Contact them today for a free consultation to get the process started if your loved one has been injured in this manner at a long-term care facility to recover financial compensation for medical expenses and resulting pain.

What Is a Nursing Care Plan for Burn Patient?

Burn centers must develop a Nursing Care Plan to ensure that the burn patient has the best chance of recovery. The doctors and nursing staff will formulate the plan based on the Palmer Method estimations of TBSA (total body surface area) that might involve minor or significant burn care.

The plan should include a comprehensive clinical assessment followed by ongoing pain management, monitoring, psychosocial support, and wound care. At some point, the doctor will provide a home care plan with follow-up appointments to minimize many of the risk factors associated with burns.

What Are the 5 Signs of a Burn?

Most individuals receiving patient care for a burn suffer mild to severe pain, blisters, redness, and peeling at the affected site. Most burn patients experience sweating, flushing over the entire body, dealing with ongoing tenderness, and sensitivity to pain.

The five signs that you have been burned include:

What Is the Most Painful Burn?

According to the National Institutes of Health, there are four types of burns, including first-degree (superficial) burn, second-degree (partial thickness) burn, third-degree (full thickness) burn, and fourth-degree (muscle and bone damage) burn where the nerve endings are destroyed or damaged.

Typically, the extent of pain one experiences from a burn depends on the affected body area. Some burns have no blisters, by others have reddened and swollen skin or charring destroyed skin tissue.

The most common painful burns include:

Should a Burn Be Kept Moisture Dry?

According to the Mayo Clinic, clean the burned area daily using mild soap followed by applying antibiotic dressings or ointment to ensure that the wound remains moist. Keep the damaged area covered with a Band-Aid or gauze and frequently apply antibiotic ointment to the affected burn skin that cannot be kept moist.

How Do I Know If a Burn Needs Medical Attention?

If the burned affected area is swollen or red with severe pain or exhibits a foul odor or oozing liquid, it could be infected. Without medical attention, the critical condition could worsen over time.

Any burn larger than the size of your hand's palm likely requires medical attention.

Why Do Burn Patients Die?

According to the National Institutes of Health, patients with severe catastrophic burns often suffer horrific secondary effects of their injuries that might include multi-organ failure. Any delay or deficiency in resuscitation could also increase the patient's risk of dying from their burn injury.

Even with the best care, the burn patient might develop life-threatening problems from the fire or smoke inhalation injury that include:

Fire safety is a paramount concern in nursing homes. Facilities must follow safety and health care guidelines, given the home residents' vulnerability and the difficulty in evacuating immobile residents quickly.

The facility's annual inspection carried out by the state at the behest of the federal government will have many different checks for fire safety. Nursing facilities will receive a separate grade and evaluation for fire safety.

The evaluation checks everything as opposed to merely sampling several items to inspect.

Severe burns could happen in one of several different ways. Some residents are burned through their reckless actions.

Many residents have smoking habits, and depending on the resident's cognitive abilities and mobility, the nursing home staff might allow the resident to take smoke breaks independently. However, some residents, when left unsupervised, might not follow safe smoking habits.

As a result, a flaming ember from a cigarette or a lighter could lead to harm requiring burn care.

Sometimes, the resident might be given a cigarette by someone else even they do not have a smoking habit. When that resident has limited mobility and cognition yet attempts to light the cigarette, they might light themselves on fire.

Smoking (cigarettes and e-cigarettes) also poses a danger to other residents in the vicinity when there is a fire. Other residents could have some electrical appliances in their rooms that can overheat or start a fire.

Generally, nursing facilities should carefully inspect and supervise the use of these implements. However, sometimes, these appliances are misused or have electrical issues that could cause a fire. A burning appliance could cause grave injuries.

Finally, there is also the possibility that the entire nursing facility can catch fire and burn. Nursing facility fires could be extremely deadly to immobile residents who might not be evacuated in time.

Many nursing home fires over the years have turned deadly and killed large numbers of residents. Not only must a nursing facility keep its property safe and eliminate risks of fire, but it must also have a practical evacuation plan that it must follow in the event of a fire.

Even if the fire itself was not the fault of a skilled nursing facility, the home might be held liable if it does not take the right steps to keep the residents safe.

Another type of burn does not involve fire where residents are scalded by hot water and suffer similar burns to a fire. Residents left unsupervised in a shower or bath could suffer first-degree or second-degree burns to the skin and underlying tissue, requiring comprehensive wound care and pain management.

The nursing home's first step must be in fire prevention. Since many fires can begin in the kitchen or dining area, the facility must take adequate measures to separate those areas from the rest of the facility and build safeguards to keep any fire from spreading. Over half of the fires at nursing facilities start in the kitchen.

The nursing facilities must identify other high-risk areas, such as laundry, and take additional safety steps to make them more fire-resistant. The facility will need to have adequate sprinklers and test them regularly. They will also have to periodically reevaluate their safety plan and make changes, as necessary.

Sometimes, the medical facility's response is even more disturbing than the actual incident itself. For example, during the rampant California wildfires, two homes left elderly residents behind.

These homes outright abandoned the residents, leaving them to be harmed by a raging wildfire. Although no residents were injured or killed, some of these nursing facilities abjectly failed to execute their evacuation plans.

One nursing facility attempted to claim that its employees successfully evacuated all the residents inaccurately. As a result, the California state elder home regulator has announced intent on shutting down that nursing facility.

These incidents caused sixteen fatalities and over one hundred serious injuries. While nursing facilities have improved their fire safety over the years, history is filled with events that have had large-scale casualties during nursing fires.

For example, before 1979, there were seven separate fires across the country that resulted in over twenty residents' deaths. In 1957, a fire at a Missouri nursing facility killed seventy-two residents.

Six years later, a fire at a facility in Ohio caused by faulty electrical wiring killed sixty-three residents. Stringent inspections and mandated safety plans have reduced some of these risks, but fires still occur frequently at nursing facilities.

Settlement for $80,000 in Pennsylvania (2009) – In another non-fire related injury, the resident suffered burns over seventeen percent of his body due to an allergic reaction. Here, the resident has prescribed an antibiotic to treat a urinary tract infection but was allergic to the medication.

The prescription was given despite the resident's allergy. A negligence claim was brought against the facility resulting in a settlement.

Lawsuits Filed in Pennsylvania (2017) – There was a blaze in a Pennsylvania nursing facility that killed four residents. A federal investigation could not determine the fire's cause, but it did establish that the main sprinkler was turned off shortly before the fire.

The sprinklers were also not appropriately designed, and there were no external sprinklers that could have prevented the fire from spreading.

Lawsuit Filed in Georgia (2015) – The resident was traumatized after spending seven hours hiding in a bathroom from an advancing fire. The facility's policy was for residents to shelter in place during some emergencies.

The resident became convinced that she would die and covered herself with wet towels to protect herself. For more information on Georgia nursing neglect, look here.

Settlement in New York for $300,000 (2000) – The resident was blind and was smoking in a specially designated room for the activity. According to the NY neglect lawsuit, the residents were not adequately supervised.

The resident believed that they had extinguished the cigarette and put it in their chest pocket. However, the cigarette was not out, and the resident's clothing caught fire, and they suffered severe burns.

Jury Award for $378,000 in California (1998) – The resident was walking around carrying a hot cup of coffee. She spilled the coffee on herself and then fell. In the fall, she broke her femur and suffered severe burns from the coffee.

The CA facility claimed the accident was the resident's fault, but the plaintiff argued that elderly residents should not be walking around carrying hot cups of coffee.

Settlement for $185,000 in Florida – After a short stay at a nursing home, the resident was discovered with severe burns on her lower extremities. Nobody was able to establish precisely how the resident received the burns.

The family argued that the burns must have occurred at the Florida nursing facility and that the facility was negligent. Even though the exact cause was not determined, the case was settled at mediation.

Has Your Loved One Suffered Severe Burn Injuries at a Nursing Home? Experienced Attorneys Here for You.

The elder abuse attorneys at the Nursing Home Law Center (NHLC) will help you stand up to the facility and get your family's day in court for the harm that your loved one has suffered.

Contact our law firm today at (888) 424-5757 (toll-free phone call) or through the contact form to schedule a free consultation. All discussions with our law firm remain confidential through an attorney-client relationship.