What Is a Kennedy Ulcer? 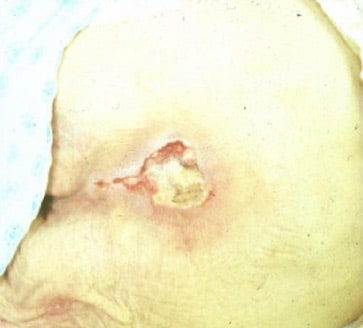 When a Kennedy ulcer appears, it can signify your loved one is in their last days or hours of life. These ulcers occur during the dying process as a symptom of skin failure in areas not receiving enough blood and oxygen.

They occur suddenly on the skin in the shape of a pear and are likely purple or black. Do you have a family member who developed a Kennedy Ulcer or died after it appeared on their body?

We are committed to guiding you through this difficult time and getting your family fair compensation. Call our affiliate nursing home abuse lawyers at (800) 926-7565 to schedule a free case review with one of our medical malpractice attorneys.

Kennedy terminal ulcers are most likely to appear in geriatric terminally ill patients and are rare in the pediatric population. Therefore, they can present in nursing homes and hospice care patients and are associated with the end of life.

The exact cause of a Kennedy ulcer is unknown, but it is understood that it is a sign of impending death. Blood and oxygen are mostly passed to the heart and brain during the dying process.

Multiple organs in the body can begin to fail when there is a decrease in blood pressure throughout the body. The body’s largest organ is the skin, about 10% to 15% of your total body weight.

The Kennedy ulcers may develop when the skin fails due to other body systems beginning to shut down. These injuries can develop in as little as 3 to 8 hours and are primarily found in the sacral region.

Kennedy ulcers will begin with superficial skin loss and turn into a black necrotic wound as it worsens. Skin failure is a strong indication of terminal status in a patient.

Signs and Symptoms of a Kennedy Terminal Ulcer

The rapid progression of a Kennedy ulcer will reveal the severe warning signs of this injury. Some of the signs and symptoms of a Kennedy Terminal ulcer include:

Difference Between a Kennedy Terminal Ulcer and a Pressure Ulcer

Kennedy terminal ulcers and pressure sores may sometimes be mistaken for each other but are very different in their characteristics and causes. Kennedy ulcers will occur as part of the dying process, but pressure ulcers are injuries due to extended pressure on the skin.

Pressure ulcers or bed sores are likely to occur due to the negligence of a caregiver.

In nursing homes, pressure ulcers can be common in individuals who are bedridden or have mobility issues due to care neglect. A nursing home resident left in a wheelchair for a prolonged period may develop these pressure ulcers in their buttocks, tailbone, and elbows.

The prolonged pressure will cause the skin to swell and turn red or purple when it develops. These injuries must be treated immediately with appropriate wound care or may worsen and develop complications.

Untreated pressure ulcers can cause deep tissue damage that reaches the muscle or bone. The skin can also break as they worsen, putting the patient at higher risk of developing an infection or sepsis.

Pressure sores are preventable and usually result from neglect. The elderly and disabled must have their position often changed to prevent this injury.

According to John Hopkins Medicine, a pressure ulcer can develop in as little as 2 to 3 hours. If a pressure ulcer is treated early on, it can heal in a few days, but neglecting to treat the injury can result in severe damage and even death.

In contrast to bed sores which can develop and worsen over time, a Kennedy terminal ulcer rapidly develops and can become a necrotic wound within a few hours. Patients identified as terminal or with a critical health condition that can cause organ failure may develop Kennedy ulcers.

This skin failure can result from an overall health decline affecting the entire body. Although Kennedy terminal ulcers are very different from other pressure injuries, they still have a pressure component.

The skin over bony prominences is more likely to receive a Kennedy ulcer due to more pressure in those areas from less blood traveling to the skin. There is usually a sudden onset on an individual’s lower back in the sacral region.

Kennedy terminal ulcers can also develop on the heels, arms, elbows, and posterior calf muscles. They may also have irregular borders and be shaped as a pear or butterfly.

The stages of a Kennedy terminal ulcer will progress much quicker than a pressure ulcer. Unlike pressure ulcers requiring treatment, Kennedy ulcers are not treated but managed to provide comfort for a patient approaching the end of life.

Can Kennedy Ulcers Be Treated?

When the skin fails, the sudden onset of a Kennedy terminal ulcer indicates that the end of life is approaching. Because this injury is part of the natural dying process, it is usually only treated with wound care focusing on pressure and pain relief.

A patient with a Kennedy ulcer will receive appropriate pain management and support care. The individual is likely already receiving palliative treatment to provide comfort and help relieve symptoms of a terminal illness.

The fast wound development and severe damage that result from a Kennedy ulcer are characteristics that reveal the patient will die soon. It would be difficult to focus on wound healing of the Kennedy terminal ulcers because the body’s organs are failing.

Doctors will primarily focus on preventing wound infection rather than healing. Treating wounds such as pressure ulcers involves careful dressing changes, changing the positions of the patient, and cleaning with saline water.

Constant monitoring, tending to the wound, and other extensive treatments, such as negative pressure wound therapy, can be painful and uncomfortable for the patient. Family members may prefer not to reposition their loved ones or undergo considerable treatment to keep them feeling comfortable.

Doctors and nursing staff will focus on managing pain and protecting intact skin with a Kennedy ulcer. Some of the appropriate care measures that are taken for a Kennedy ulcer are:

A pressure sore is preventable by moving a patient’s position and not leaving them unattended in the bed or wheelchair for too long. A nursing home or caregiver can be negligent because this pressure injury is preventable.

Nursing staff must maintain skin integrity by ensuring that patients’ skin is taken care of with repositioning, bathing, proper wound care, and moisturizing. They must also maintain a turning schedule and monitor patients for changes in their overall health.

Bed sores indicate that caregivers have failed to give adequate care to a patient and their skin. A Kennedy ulcer is not preventable if the patient suffers from severe health conditions and other organ systems fail.

These ulcers are associated with the end of life, and negligence is usually unrelated to this injury.

People who are suffering from a terminal illness are likely to receive extensive care already to further prevent injury. It would be difficult to perform advanced treatments for the Kennedy ulcers and the care they are already receiving.

Can I File a Medical Malpractice Lawsuit if my Loved One Suffered From Kennedy Ulcers?

The Kennedy terminal ulcer on its own is not enough evidence to present as a sign of negligence because it usually indicates that the end of life is inevitable at that point. You may suspect that a doctor made an error that resulted in the skin failure and death of your loved one.

Some common medical malpractice cases include misdiagnosis, making a surgical mistake, and medication errors. Consult with another qualified health provider and get a second opinion if you feel your loved one may have died due to negligence or a medical error.

You may also want to speak with a medical malpractice attorney who can investigate and help you and your family navigate the legal process.

Misdiagnosis of a Kennedy Terminal Ulcer

There have been instances where nursing home patients are misdiagnosed with Kennedy ulcers when they suffer from pressure ulcers. Both can be common in terminal patients, but pressure injuries are more likely due to neglect.

To avoid a negligence lawsuit, a nursing facility may tell a patient’s family that their loved one had Kennedy terminal ulcers. You could file a medical malpractice claim if your family member died from pressure ulcers that could have been treated and prevented.

The nursing or hospice care facility can be found negligent for leaving a patient unattended for hours, failing to treat the pressure ulcers, and giving the wrong diagnosis.

Pressure ulcers will not occur as a sign that a person’s life is ending, and they can heal relatively quickly if treated immediately. When a person dies from the complications of pressure ulcers, it is because the caregiver was grossly negligent in caring for the patient.

Contact a Medical Malpractice Attorney to Resolve a Compensation Case

When a loved one has passed away and is determined to have also suffered from a Kennedy terminal ulcer, family members should inquire about the exact cause of death. It is crucial to ensure the nursing staff and doctor looked at all of the possibilities and attempted testing and skin wound care promptly.

A misdiagnosis of a Kennedy ulcer is possible, or if there were factors involved that you suspect an error occurred, you should speak with a medical malpractice attorney. Nursing homes or hospice care facilities should be held financially accountable for their negligence.

Kennedy terminal ulcer cases require an investigation, resources, and expert witnesses to present the negligence case. Our experienced attorneys are dedicated to providing the best possible representation to victims of medical malpractice.

Call our affiliate nursing home abuse lawyers at (800) 926-7565 or use the contact form to schedule a free consultation, and we will advise you of options and guidance for your Kennedy terminal ulcer claim. Our law group at Nursing Home Law Center, LLC handles cases on a contingency fee basis, meaning that we earn a fee when we succeed in settling your claim.

All confidential or sensitive information you share with our legal team remains private through an attorney-client relationship.