Nursing homes are obligated to care for their residents. Besides the apparent duties to provide medical care, assistance with daily activities, and food and nutrition, certain essential obligations should be self-evident but bear repeating.

Nursing home staff have a duty to protect their residents from any severe injury-- including becoming injured when leaving the safety of a skilled nursing care center.

The personal injury attorneys at the Nursing Home Law Center LLC represent victims injured by a center's neglect and abuse, including those at high risk of wandering (elopement) allowed by negligent caregivers.

If your family member or a loved one wandered away from the safe environment of a nursing facility, contact us today for a free case evaluation.

As with all of our elder care abuse and neglect cases, we handle wandering cases on a contingency fee basis where there is a financial recovery for you.

Discuss your legal options for recovery with an experienced attorney today in a free consultation. 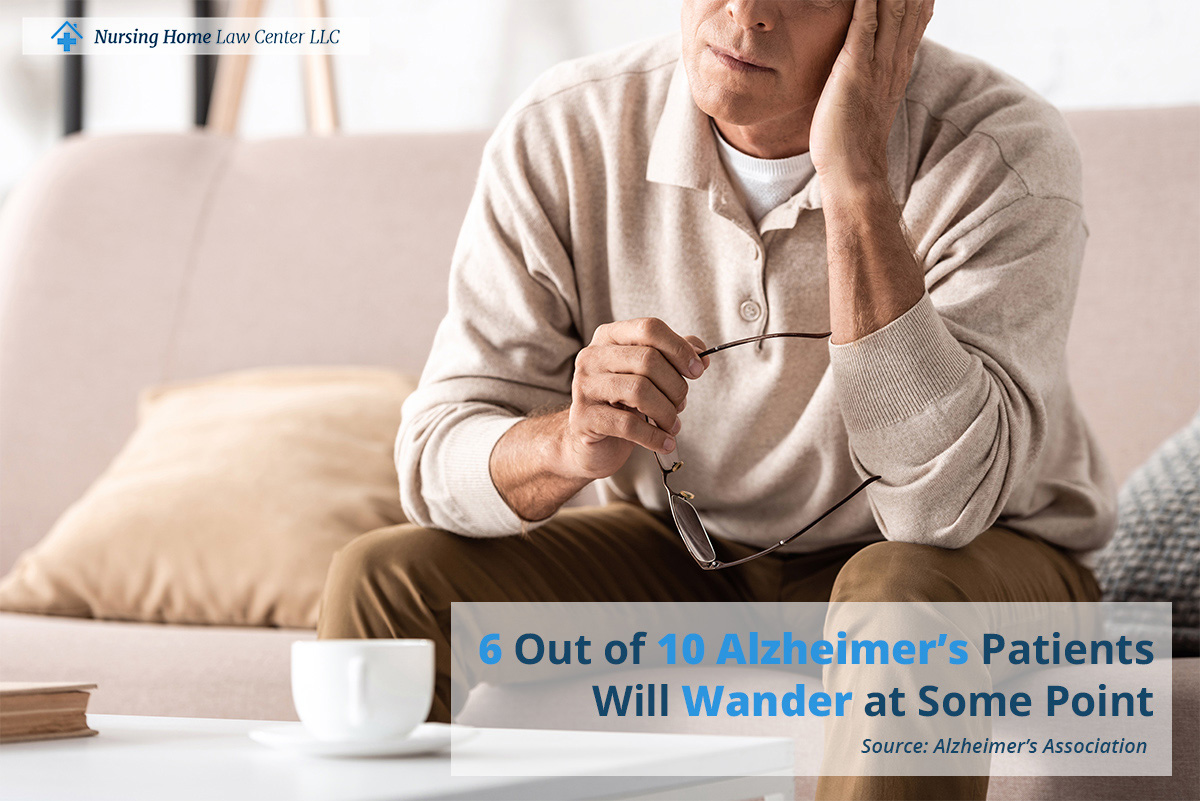 Elopement is more prevalent in cognitively impaired individuals or those with Alzheimer's disease, especially in areas lacking video surveillance.

Many mobile dementia patients are known to wander when nursing care is unmet.

Wandering occurs when the resident wants more stimulation or a physical reason, like needing to urinate. Sometimes, a disoriented resident's desire to go home is so strong that staying will create physical discomfort.

It is estimated that approximately one in three nursing home residents who have dementia will leave the facility at least once during their residency there. The same residents who leave once might have a propensity to engage in the behavior.

Leaving the safety of skilled nursing centers (or assisted living facilities) presents a significant danger to the resident. If the patient is not located within the first twenty-four hours, there is approximately a twenty-five percent chance that they will not survive.

Negligence is a significant contributing factor in why residents elope from the center. Elder elopement is often the result of the center failing to uphold their duty to care for the residents through a lack of supervision that allows patients to leave the care center.

Nursing homes must assess a resident's risk of leaving the facility. If they have deemed the resident to be a risk of elopement, the caregivers must protect the patient and prevent them from leaving the safety of the facility.

These measures need to be strengthened and updated if the resident has left once returned to the center.

Nursing homes often have an inadequate number of staff members to provide the necessary care and supervision to the residents. Understaffing could enhance their profitability.

Unfortunately, a lack of caregivers means that residents are not always well cared for and supervised. Residents wander when staff members fail to watch them.

The home staff might have lost track of the patient and not even realized that they were missing. The immediate time after a resident has eloped is critical to locate them.

The further that they get from the facility, the more difficult it will be to find them. The patient might become more disoriented if they miss a dose of medication.

As such, nursing homes might take insufficient measures to find residents who have wandered. Sometimes nursing homes are negligent in that they leave secure doors unlocked, which makes it easier for a resident to exit the center. Either that or they do not adequately watch the exits from the facility.

Nearly all elopement cases involve residents who either left through the front door or a side exit with the door unlocked.

What Are Interventions for Nursing Home Wandering?

Long-term care facilities must take special precautions to ensure that their residents do not wander about the home or outside, especially those diagnosed with dementia and Alzheimer's disease.

Many nursing home residents experience confusion associated with medication's side effects, or "sundowners," where brain chemicals begin to change at dusk.

The four interventions to prevent eloping include:

What Are the Different Types of Wandering Behaviors in Nursing Home Residents??

The nursing staff should develop safe environment care plans for wandering residents by understanding their motivation to elope the premises or wander around. The common types of wandering involve:

Who Is at Risk of Wandering?

The center must develop an effective Care Plan that identifies the early warning signs that a resident wants to wander away or go home.

Residents most significantly at risk for wandering include those who:

Wandering nursing care residents are often confused, bored, or suffering from mental impairment. Other residents are curious, thirsty, or hungry and want to fill the void.

Potential reasons that a nursing home patient will wander from the protected area include:

What Is Elopement in a Nursing Home?

Many families place their loved ones in a nursing home care facility to ensure that they remain safe in a protected environment. Unfortunately, many facilities fail to monitor their residents accurately due to understaffing or overworked caregivers.

Elopement (wandering away) is typically caused by unsupervised care in a long-term care facility that immediately endangers the resident, exposing them to severe injuries or death.

What Is the Difference between Wandering and Elopement?

Alternatively, wandering is often classified as the patient walking away from a safe environment inside the facility to another floor, room, or unprotected area.

Residents allowed to wander inside the building unsupervised could elope from the facility beyond the parking lot to busy streets and dangerous areas.

In some instances, nursing home residents resist the confinement of receiving care in a defined space. In some cases, the resident leaves safe areas in the assisted living facility or nursing home to wander off unsupervised and dangerous areas, including city streets and highways.

Often, residents wander off the premises due to mental impairment, eloping the secured facility when no one is watching. The patient might have cognitive impairment (such as Alzheimer's disease or dementia) and have an idea that they want to be elsewhere.

When that happens, these residents might elope from the nursing home facility. When nursing home residents are on their own, they are vulnerable to many different things. For example:

At the same time, if the resident is not receiving nursing home care for a while, it can lead to infection. For example, if a resident has developed a pressure ulcer and has left the facility, regular cleaning and wound treatment is vital to prevent infection.

Residents who leave the facility's safe environment increase their risk of falls, resulting in fractures, broken bones, or death.

Nursing homes must protect residents or face significant legal consequences if a wandering resident is harmed or injured. When older adults have eloped from the nursing center, the state and federal regulators cite the facility with a non-compliant violation that resulted in the resident's actual harm.

These neglect cases often involve a penalty assessed against that skilled nursing facility. 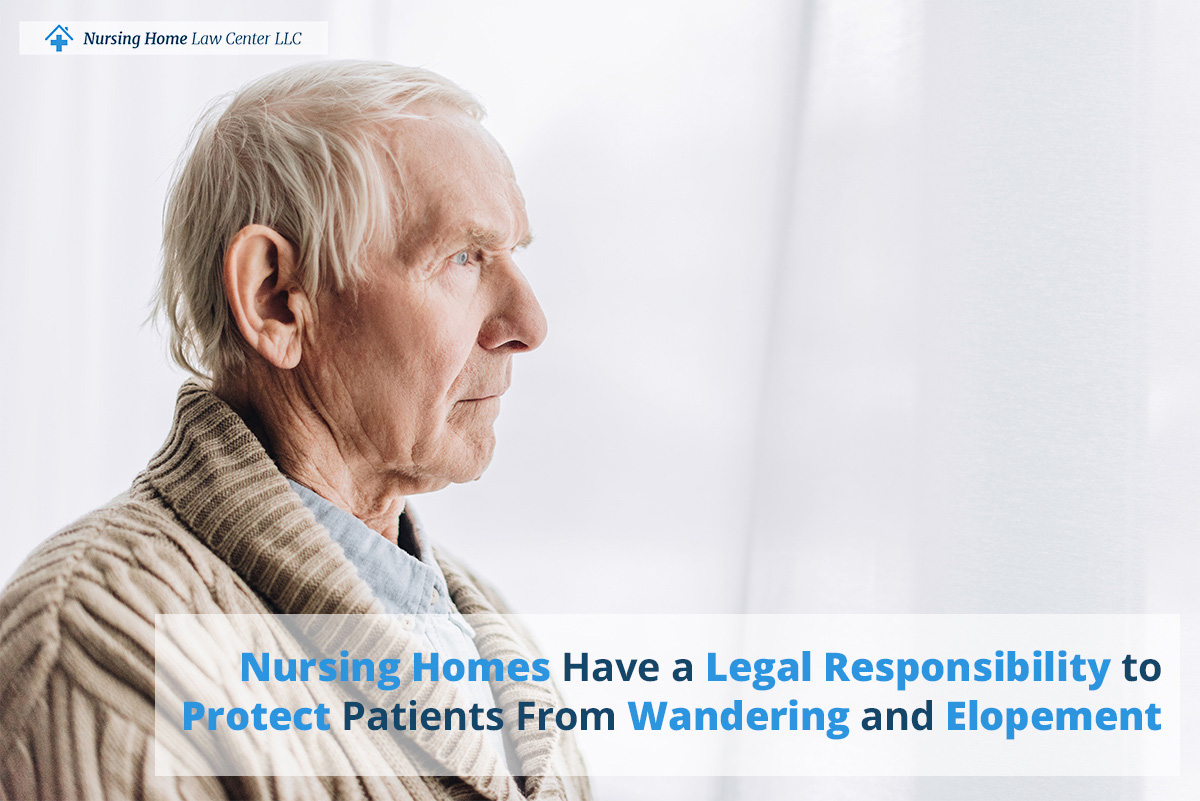 Sample Wandering and Elopement Lawsuits and Settlements Against Nursing Homes

The nursing facility's potential liability begins when the resident exits the facility unsupervised. Any attack, abuse, or mistreatment of the wandering resident could result in the facility's civil liability, where staff could be criminally charged.

The nursing home could be negligent if the facility knew or should have known that the elderly resident might leave the facility. The staff must show how they assessed the resident's risk and their measures to prevent elopement.

Below are some instances of nursing home abuse lawsuits that have been filed against facilities for patient injuries related to wandering and elopement.

The nursing staff knew of the resident's risk of developing and leaving the facility unattended. Without warning, the man using his wheelchair left the facility unnoticed through a broken and unlocked door late in the night during freezing temperatures.

The resident was found dead in a dumpster the next morning. His limbs were frozen.

The lawsuit alleged that the facility was negligent in letting him exit the facility unsupervised and delayed searching. For more information on Michigan nursing homes, look here.

The resident admitted to the facility with a known tendency to roam left the Pennsylvania nursing center at night. Video surveillance revealed her walking around disoriented.

The lawsuit document revealed that the staff ignored alarms she triggered while leaving. The resident fell off a retaining wall and suffered a head injury while falling two stories onto concrete.

She was not wearing a Wander Guard bracelet when she left the facility as prescribed by her care plan. She died from her injuries.

A resident's family members believe their loved one was a roaming risk with a history of delusional thoughts. At 10:00 PM, the resident left the facility after being seen near the facility's front door. The staff did not allegedly check his room or conduct a thorough search after discovering his disappearance.

The man was found lying down in the parking lot, suffering an injury from the cold. He was hospitalized before being sent back to the facility, where he died the next day.

Settlement for $1 million in California

The family members of a resident with Alzheimer's chose the facility believing that staff members could protect their loved one. The resident left the facility and entered a mobile home park, where they fell.

The resident contracted pneumonia from being outside, which was the cause of death. The wrongful death lawsuit alleged that the home did not have adequate staff to monitor and keep the resident inside the premises.

The resident left the facility and returned to a former residence where he had lived 20 years ago. The resident was suffering from renal failure, requiring dialysis.

Authorities found the resident ill after he had wandered into a building. In addition to alleging that the NY home was negligent in allowing the resident to wander (elopement risk), the lawsuit also claimed that the home failed to administer his medications.

Has Your Loved One Been Injured After Leaving a Nursing Home? Get Legal Help Now

Wandering or elopement is, unfortunately, a common cause of nursing home injuries. The nursing home abuse lawyers at the Nursing Home Law Center have experience filing claims against skilled nursing facilities and can help your family with your case.

Contact our law firm today at (888) 424-5757 (toll-free phone call) or through the contact form to schedule a free consultation to discuss receiving the financial compensation your family deserves.

All discussions with our law firm remain confidential through an attorney-client relationship.