Jersey City is the current fastest-growing municipality in the State of New Jersey and its proximity to New York has earned it the title of “Wall Street West.”

A Jersey City nursing home abuse lawyer from Nursing Home Law Center LLC works diligently to protect the growing senior population from an epidemic of abuse and neglect that has surfaced over the last ten years.

As more nursing facilities fall into the hands of for-profit corporations, the needs of patients are being outweighed by the desire for profit.

We’ve provided information below about the prominent New Jersey nursing home facilities serving the area so that you can make more informed choices and be aware of common nursing concerns.

If you suspect nursing home abuse of a loved one, contact an affiliated elder abuse lawyer today for a free case evaluation.

Medicare collects information every month on all nursing facilities in Jersey City, based on data gathered through investigations, surveys, and inspections.

Was your loved one harmed, mistreated, or died unexpectedly from neglect or abuse while living in a nursing home or assisted living facility in New Jersey?

If so, we invite you to contact the New Jersey nursing home abuse and neglect attorneys at Nursing Home Law Center (800-926-7565) today to schedule a free case review to discuss a financial compensation claim.

From the 1930s until the 1980s, Jersey City, New Jersey experienced a sharp population decline and is now rebounding as the fastest growing city in the state.

Its diverse population has grown from 247,000 to 262,000 in only four years and its economy is strongly tied to the transportation, freight, and manufacturing industries. Jersey City is an important and strategic transportation hub because of the Port of New York and New Jersey that it serves.

In recent years, many financial services companies have moved in, helping restore its downtown central business district and earning the city the title of “Wall Street West.”

Over nine percent of Jersey City’s population is senior citizens and thousands more of its adults will be reaching the age of retirement over the next decade. The Office of Senior Affairs assists seniors and aging adults who are seeking to remain healthy, happy, and active.

Its services include free movie screenings, a bus program that transports seniors to local grocery stores, regular health screenings and flu shots, a nutrition program, and an outreach program that connects seniors with the services provided via eighty different senior citizen organizations located throughout the area. 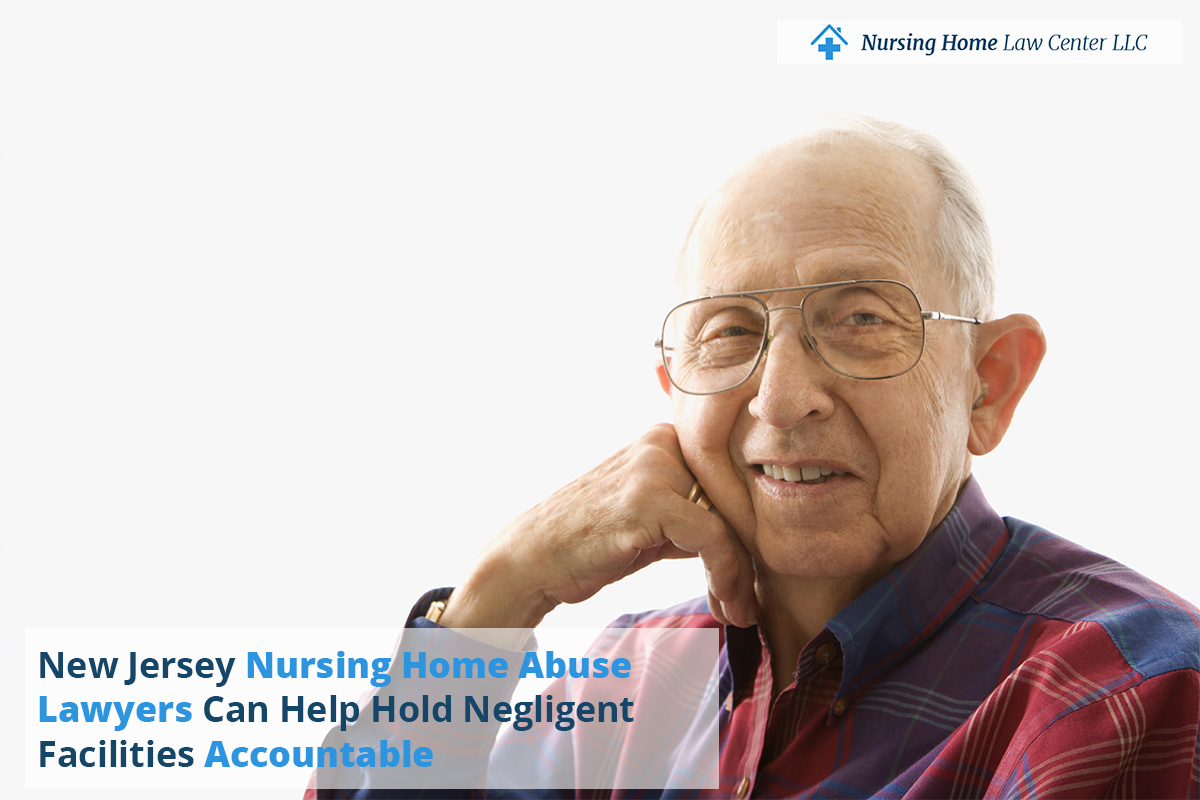 You can use this information to notice potential concerns more quickly and make more informed decisions prior to placing your loved one in a nursing facility.

If you feel that your loved one is in a poor environment, a nursing home abuse attorney can assist you in relocating them into a center that provides a higher quality of care.

Our NJ nursing home abuse lawyers have compiled data from settlements and jury verdicts across New Jersey, New York, and Pennsylvania to give you an idea as to how cases are valued.

Overall Rating— 5 stars out of 5

Primary concerns: This New Jersey nursing home has received excellent ratings for its staff quality and quality measures. However, there are minor concerns over recent health inspection deficiencies at the New Jersey nursing home. Proper sanitation and environmental safety measures prevent the spread of communicable diseases and injuries due to environmental hazards.

One surveyor identified nursing Home negligence on December 17, 2018 when the staff failed to "follow the accepted standards and their policy and infection control practices." The incident involved observation of wound care where the staff failed to "review the Infection Control Practices, Standards, Policies and Procedures annually."

The nursing home staff failed to follow protocols for handwashing and minimizing the transfer of infection. At one point, a Nurse Supervisor was "about to donning clean gloves and get clean gauze inside the wrapper. However, the surveyor had to stop the Nurse Supervisor to reminder to wash her hands [before donning] clean gloves." 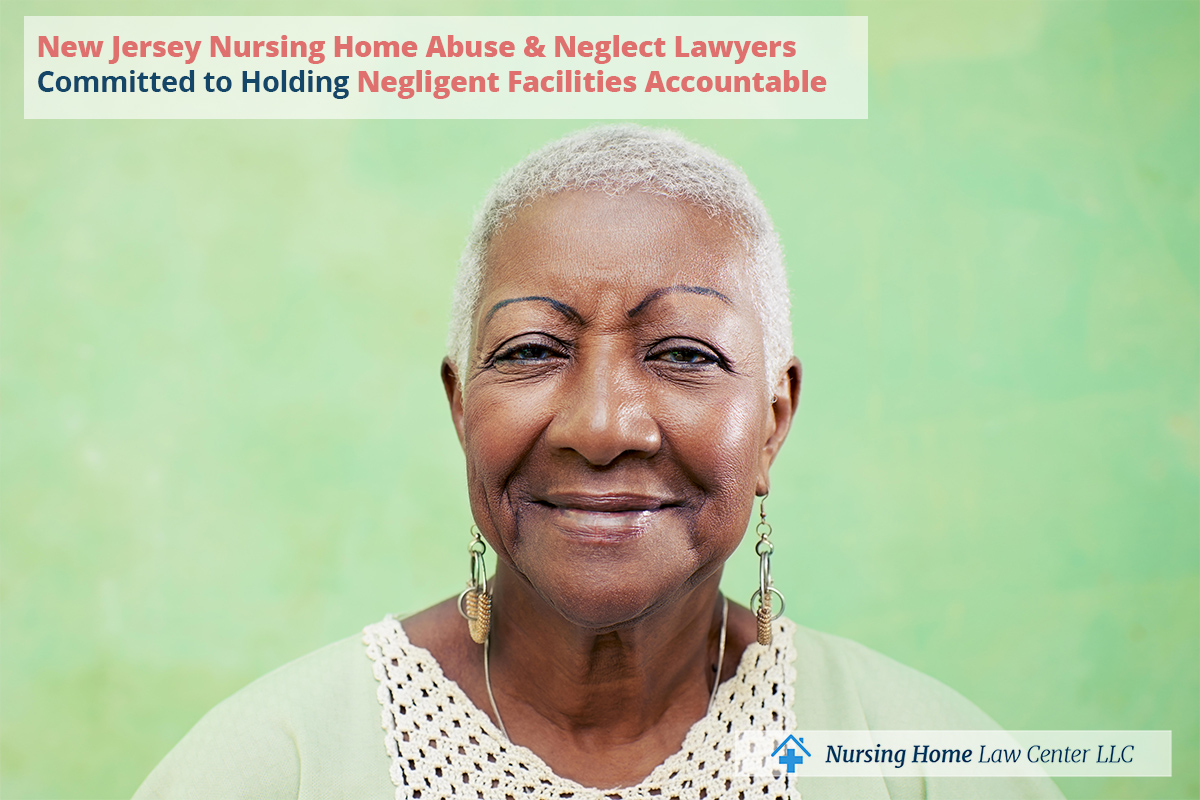 Overall Rating— 3 stars out of 5

Primary concerns: Understaffing concerns may be driving this nursing home facilities a poor health inspection history. When for-profit corporations cut costs but reduce staff to barebones levels, it limits the resources the NJ nursing home has with which to ensure quality service. In this instance, it has resulted in poor sanitation and environmental safety records.

Overall Rating— 4 stars out of 5

Primary concerns: This NJ nursing home has received mediocre ratings for the quality of its staff and measures taken to ensure that the needs of patients are met. While it has received a decent rating overall, there is still room for improvement.

On March 13, 2019, the state surveyor noted that the nursing home had failed to "honor the resident's right to a dignified existence, self-determination, communication, and exercise his or her rights." The ferry was noted in one of the facilities for dining rooms on the second floor. The facility was cited for nursing home neglect because staff failed to provide meals to some residents that needed assistance with feeding while providing meals to other residents who did not require help.

In a separate summary statement of deficiencies dated January 29, 2018, investigators observed a non-verbal nursing home resident dressing alone in their room seated in a tilt back chair. Both of the resident's feet were exposed on a metal foot rest.

The surveyors say that the facility for nursing home negligence for the staff's failure to place and keep Physician-ordered foam boots On the resident's legs and feet during the healing process of wounds on their lower extremities.

Overall Rating— 2 stars out of 5

Primary concerns: As is often the case with nursing home chains, the prioritization of profit often results in concerns at one or more of the chain’s facilities. The Jersey City nursing home is plagued by an abysmal health inspection rating that is so poor it has lowered its score to two stars despite respectable staff quality and quality measures scores.

On January 30, 2019, the state surveyor cited the facility with nursing home neglect after identifying a resident with a facility-acquired sacral wound and opening on the right and left buttock (possible medical malpractice). The surveyor reviewed the nursing home residents care plan which noted "at risk for impairment to skin integrity related to impaired mobility and history of skin breakdown."

Overall Rating— 5 stars out of 5

Primary concerns: This New Jersey nursing home has respectable scores all around. Its only areas of potential improvement are in addressing minor health inspection deficiencies and hiring additional nursing home staff members.

On November 14, 2016, a state surveyor cited the facility for nursing home neglect after identifying that the staff "failed to provide adequate supervision to prevent incidents in accidents from occurring." The staff members Fail to supervise nursing home residents, especially one patient using smoking materials.

The surveyor noted that the nursing home resident had cigarettes and a lighter. However, facility policy mandates that all lighters and matches are to be kept at the nurse's station.

Overall Rating— 3 stars out of 5

Primary concerns: Despite quality nursing home caregivers and quality measures concerns, this facility is plagued by a poor health inspection history. Additionally, on March 18, 2019, a state surveyor observed a resident "sitting in a wheelchair wearing a seatbelt that was closed."

The surveyor asked the nursing home resident why they were wearing the seatbelt. The resident replied, "it is so I do not fall out of the chair." However, the surveyor noted that the Medical Records failed to identify a Physician's orders and legal approval for use of physical restraint.

In February 2018, a state surveyor noted the facility's failure to develop a care plan for four residents. One nursing home resident, with 'range of motion' medical conditions, was not wearing Physician-ordered splints for a contracted left arm.

Physical therapy had recommended the resident undergo 'range of motion' on leave with directed exercises. However, the nursing staff failed to develop a specific schedule that meant the PT recommendations. The state surveyors cited the facility with a nursing home neglect citation. 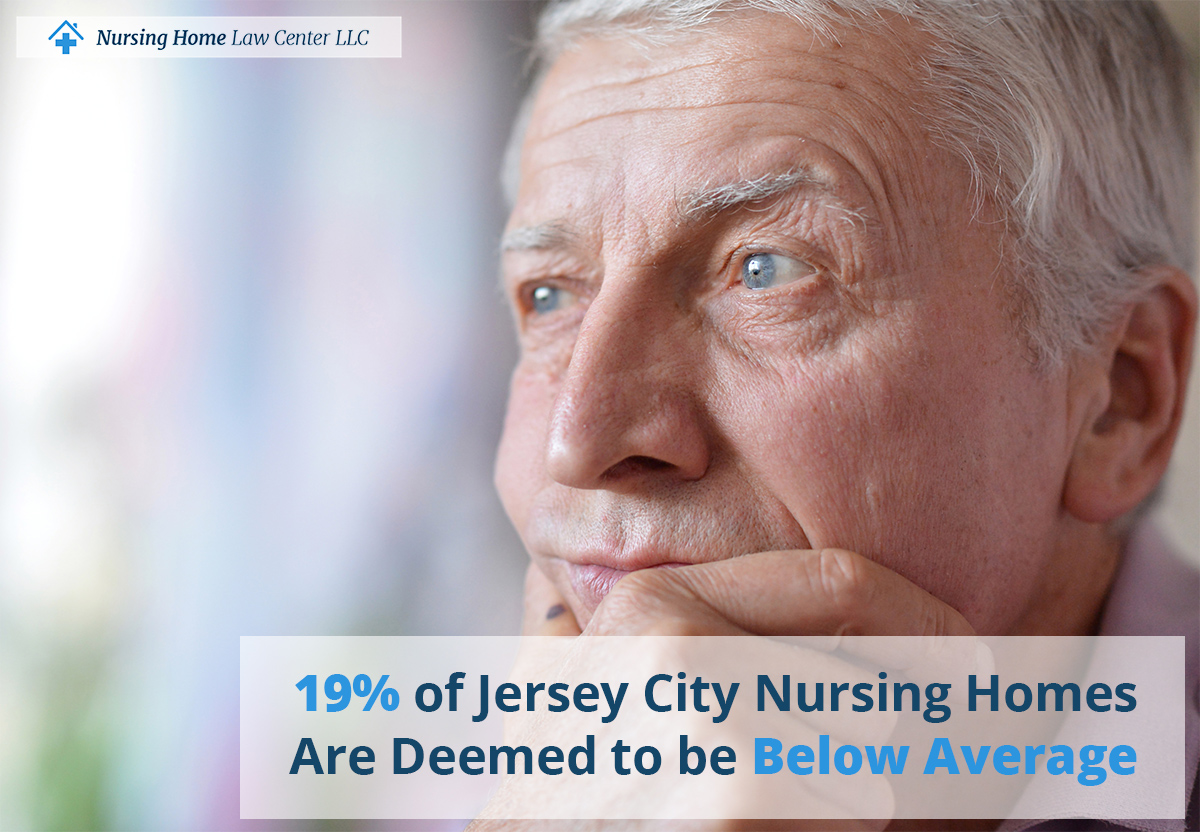 When to Seek Legal Advice if You Suspect Abuse

If you suspect that your loved one is being mistreated while residing in nursing homes or assisted living centers, we advise seeking out legal counsel if only to rule out your suspicions.

In the worst-case scenario, we can then identify an abusive situation and take measures to protect your loved one from future abuse and neglect, or wrongful death by helping with their relocation.

Some of the most common symptoms of New Jersey nursing home abuse include the following. 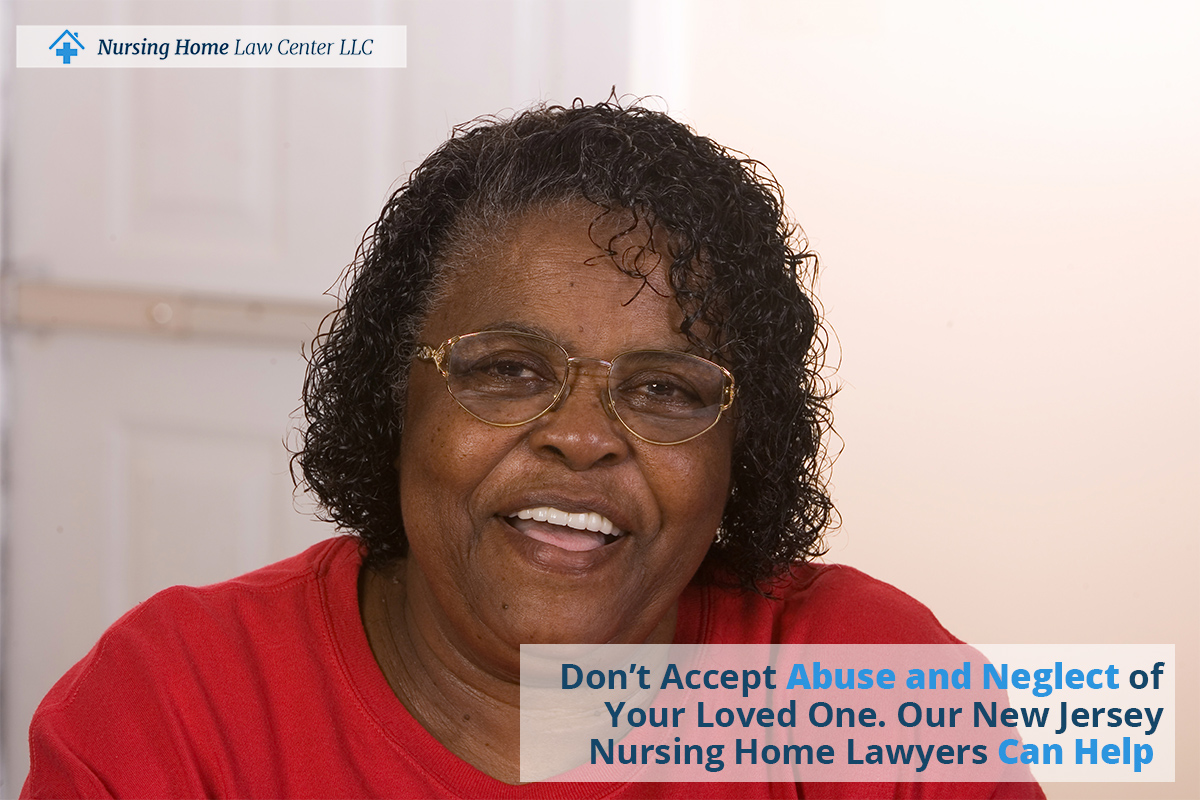 If you suspect your loved one is a victim of abuse and neglect, contact us today to arrange a free consultation with one of our Jersey City nursing home abuse attorneys so that we can collect the information we need to begin a thorough investigation into the matter and review your legal options with you.

All of our nursing home negligence cases are handled on a contingency fee basis. If we are unable to secure compensation on your behalf, our services will be free of charge. Talk to an experienced personal injury attorney today for a free case evaluation. 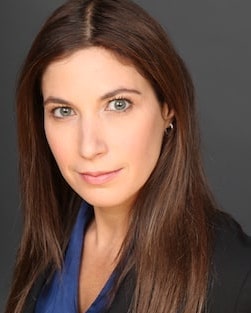 East Coast Nursing Home Lawyers
Midwest Elder Abuse Attorneys
West Coast Nursing Neglect Attorneys
Bed Sores
Common Case Types
Blog
★★★★★
I strongly recommend Deborah, and her team, for anyone who is looking for caring and tough attorneys to represent them. My mom was horribly neglected in a nursing home and Deborah uncovered the truth and fought hard for justice. She was always there to answer our questions and guide us along the way. Rebecca M.
★★★★★
Deborah helped our family get justice for the neglect of our mother who was in a nursing home. She was very dedicated to our case and fought hard to expose the nursing home for the poor care she received. We highly recommend Deborah and her team. Renee H.
★★★★★
Deborah and her firm handled a case for my family. During that time, our mother passed away at a nursing home from bedsores. Everyone at the firm was so caring and involved. We are so thankful to Deborah for fighting so hard for us to obtain justice. Delores L.
View More
Submit a Law Firm Client Review