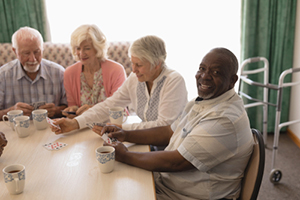 No one should ever endure abuse or neglect, yet such mistreatment is all too common in group homes involving vulnerable individuals. Any serious impactful distress can accumulate quickly if there are no authorities available that can adequately address the complaints raised about abuse.

Have you suffered abuse in a group home setting? It can be difficult to know what legal recourse is available. Depending on the nature and extent of the abuse that has been suffered, it may be possible to pursue action through civil litigation against those at fault.

The personal injury attorneys at Nursing Home Law Center LLC legally advocate for victims of group home abuse and can help you too. Speak with a nursing home abuse lawyer at (800) 926-7565 (toll-free phone call) or use the contact form to schedule a free consultation.

What Is a Group Home?

A group home is an institution that provides housing and care for individuals unable to live independently because of mental illness or disabilities.

Caregivers must be trained professional caregivers who provide 24/7 personal care for residents. Most states have laws about how much time a caregiver can work daily. Some states limit the hours a caregiver can spend caring for one resident per day.

People with developmental and intellectual disabilities face unique challenges because of their disabilities. They may struggle with communication, social skills, and self-care.

Many live in group homes where there are multiple residents living together. These homes can be challenging environments for everyone involved.

There are many types of group homes, where each type has its own set of rules and regulations. Some are privately owned, while governments or nonprofit organizations operate others.

Group home staff turnover leads to gaps in knowledge about how best to work with people with disabilities.

Widespread Mistreatment of Family Members in a Group Home

In recent investigations into the care of elderly men and women living in group homes across the United States, many facilities failed to provide adequate food, clothing, medical treatment, and even basic hygiene products. In some cases, residents had been neglected for weeks or months.

The findings come from a joint investigation conducted by the Center for Investigative Reporting and ProPublica, which examined hundreds of court documents detailing allegations of mistreatment against nearly 2,500 elderly people living in about 200 small community group facilities nationwide.

Some facilities do not allow residents to use the bathroom without supervision. Others allowed residents to wander outside unattended. And still, others did not properly train the staff member to recognize signs of mistreatment.

A Lack of Supervision to Protect Residents From Dangerous Patients

A report published Tuesday by the National Council on Disability (NCD) found that many group homes do not have enough staff members to monitor the well-being of residents. In addition, some facilities don't even require background checks for employees.

Small community group facilities are often run by religious organizations, nonprofit groups, or local governments. They house up to ten individuals, including children and adults, and typically include a psychiatrist, psychologist, social worker, and nurse.

These homes help people recover from mental health problems like schizophrenia, bipolar disorder, and depression. But the NCD found that most group facilities fail to meet basic requirements set by state regulations.

Why Group Home Dangers Are a Secret

The federal government doesn't track how many people live in group facilities across America. But it does keep tabs on the number of children living in foster care.

But what about those grown-ups who are aging out of the system? What happens to them once they turn 18? Do they end up in group home facilities? Or do they find themselves homeless?

Some experts say that one in five older Americans lives in a group home. And while most of us think of group home facilities as places where seniors go to socialize, there are many reasons why someone might want to move into one.

The federal government has published a report detailing how some group home operators mistreat residents' health and safety.

How to Report Group Home Abuse

Abused people are often afraid to tell anyone about what happens because they don't want to hurt the abuser or lose loved ones. They may feel ashamed or embarrassed. Some abusers even threaten to harm themselves or others.

You can report suspected group home abuse to Adult Protective Services. A medical exam may reveal that someone is being mistreated.

Incidents with injuries could include:

Group home facilities care for individuals with disabilities. They offer a safe place where residents can live independently. However, there are some common causes of group home abuse.

Injuries include negligence, assault, sexual abuse, financial exploitation, and emotional abuse. If you suspect a victim is being mistreated, call 911 immediately.

Nursing home residents are among the most vulnerable members of our society. They are elderly adults who require constant care due to age-related illnesses, incluiding:

Unfortunately, some nursing homes fail to provide adequate care to their residents. Some group homes do not provide enough staffing hours per resident, and others do not properly train employees.

Still, others do not follow up on reports of group home abuse and injuries or document the victim or families' concerns.

Many people with developmental and intellectual disabilities live at home or in group home facilities. While some people enjoy living in a group home environment, others do not like it because of the lack of privacy, limited freedom, or feeling trapped.

Some people feel safer in a group home than at home. Others prefer to remain independent and live alone. Regardless of where someone lives, however, they are still vulnerable to group home abuse.

In addition to the dangers posed by people outside of the home, victims of group home abuse often face additional risks inside.

If you suspect child abuse or neglect, call 911 or local law enforcement. You can also call an attorney from our office at (800) 926-7565 for assistance and a free consultation. We provide free legal representation to anyone who needs it.

Who Suffers From Group Home Abuse and Neglect?

Many people who live in group home settings suffer from disabilities. They depend on others to take care of them.

Unfortunately, abuse and neglect happen frequently in group home facilities. It's one of the most common abuses experienced by older adults in long-term care homes.

The Centers for Disease Control estimates that over two million residents are in nursing homes across the United States. About half of the residents experience group home abuse or neglect.

Many vulnerable individuals cannot speak up for themselves when victimized by group home abuse. Some don't even know how to ask for help. Others fear retaliation from caregivers. And still, others simply do not want to draw attention to themselves.

They house individuals with disabilities, mental illness, substance use disorders, or developmental delays. Unfortunately, many of these homes do not offer adequate supervision or protection.

Group home residents are much like prisoners. They cannot leave unless someone escorts them out, and they must remain within the facility during the night. They could face arrest and prosecution by federal and state agencies if they try to escape.

This lack of freedom creates a dangerous environment for both residents and staff. People living in group homes often cannot escape attacks from others inside the residence.

Staff members are also susceptible to neglect and abuse because they are responsible for multiple patients.

Group home residents suffer physical abuse and injuries from their caregivers. They are often assaulted and even killed because of negligence. Many times, neglectful conditions and negligent repairs cause accidents.

These accidents can lead to serious injuries such as broken bones, head trauma, burns, and internal bleeding.

Abuse happens because of the lack of supervision and because some adults don't know how to protect others from staff members, visitors, other patients, and families.

Financial abuse occurs most often in group home facilities because it is easier for caregivers to commit crimes against vulnerable people.

In addition, multiple caregivers are working closely together, making it easy for one person to steal money from another.

The term "emotional group home abuse" refers to how people treat each other in a family setting. This group home abuse occurs within families, among friends, and even in groups of strangers. In some cases, it can happen in the workplace.

There are many other, less obvious types of emotional abuse, including verbal abuse, isolation, neglect, and threats.

Verbal abuse includes name-calling, belittling comments, gossiping, and shaming. Isolation involves isolating someone from others, such as refusing to allow them to see friends or loved ones.

Neglect happens when someone fails to provide basic needs, such as food, shelter, clothing, medical care, or education. Threats involve making threats against another person.

In recent years, the number of children living in group homes has grown dramatically. Several factors have driven this growth, including the aging population, poverty, mental health issues, and substance abuse.

While many states are working hard to improve care for the elderly, some homes still struggle to keep up. A Journal of Child Sexual Abuse study found that over half of the group homes surveyed had experienced at least one incident of sexual abuse since opening.

There is a huge difference between how things work in a home versus a medical facility. For example, in a hospital, patients are usually under constant observation. They are often monitored via cameras and alarms. If someone tries to hurt themselves, nurses and doctors can intervene immediately.

However, in a group home, there is no such system. Most residents live alone and aren't supervised 24/7. Even though most group settings do provide daily activities, they tend to focus on physical exercise rather than emotional support.

Do you suspect a loved one is the victim of group home abuse? If so, do not hesitate to seek help. You deserve justice.

Speak with an attorney at (800) 926-7565 (toll-free phone number) or use the contact form to schedule a free consultation. All confidential or sensitive information you share with your attorney remains private through an attorney-client relationship.