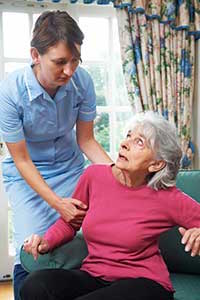 Deborah Ramirez was a single mother who loved and cared for her children – and the neighborhood children – with the energy one would expect from both parents. She worked retail jobs to support her family and dedicated herself to providing for them financially, physically and emotionally. Unfortunately, she was not afforded that same love and care by her own daughter at the end of her life.

In 2006, Ramirez suffered a stroke that left her partially paralyzed and unable to care for herself. Further strokes in 2009 rendered her largely uncommunicative. Like many seniors, Ramirez had not desired to live in a nursing home, so her daughters reached the decision that the oldest, Carmella Saldana, would care for her in her home. Hospice employees visited the home at that time, posting a list of instructions regarding Ramirez’s care and instructing Saldana to turn or reposition her mother at least every two hours to prevent bed sores.

What are Bed Sores?

Bed sores, also known as pressure sores, pressure ulcers, or decubitus ulcers, are areas of the skin and underlying tissue in frequent or constant contact with a surface such as a bed or wheelchair. Capillaries supplying oxygen-rich blood and nutrients to these areas, most commonly found over bony prominences, are compressed as a result of continuous pressure, resulting in severely reduced blood flow. Oxygen and nutrient supplies dwindle, and the surrounding tissue dies and disintegrates, resulting in an open wound in the area.

It is essential to treat patients harboring open sores with care, as bed sores get infected easily and can lead to cellulitis or sepsis. Frequent cleansing of the surrounding skin, sanitation of caregiver’s hands, changing of wound dressings, and sanitation of the patient’s clothing and bed linens are important ways of halting the spread of infection. Home caregivers must take these same precautions.

After examining the conditions at the home, investigators determined that Ramirez had been surrounded by soiled bed linens in a home infested with insects, providing an opportunity for any bed sores to become further infected. Saldana was arrested for felony neglect and endangerment on July 19, 2010. Unfortunately, this was too late; Deborah Ramirez died on August 7, 2010.

How can Bed Sores be Prevented?

The most important measure for preventing bed sores is to frequently turn or reposition patients deemed susceptible. Doing so removes the pressure from one particular area of the body and redistributes it to another, allowing oxygenated blood to flow back into the area. Carmella Saldana failed to heed the instructions posted above her mother’s bed and Ramirez was admitted to the hospital in 2010 after hospice employees visited the home and found 5 pressure sores extending to the depth of the bone.

Effective oversight of nursing homes and home caregivers by entities such as Oklahoma Adult Protective Services is essential in protecting the elderly population. Saldana had refused to let hospice staff and investigators enter the home in the time leading up to her mother’s hospitalization, but it is clear that proper attention much sooner could have saved Ramirez’s life.

What are Adult Protective Services?

Adult Protective Services, in most states a division of the Department of Human Services, was first conceived in 1961 after the White House Council on Aging. A few exploratory, community-based projects were undertaken, but it wasn't until 1974 that the Social Security Act's Title XX allowed states to use funds for adult services. By the mid-'80s, all states had provisions for protecting adult populations in need, and most had dedicated departments and offices for this purpose.

Unfortunately, in the years since, funding has often decreased even as laws stated that impaired or disabled adults were in need of the same protections offered the elderly or children. Mandatory reporting laws were established, while other beneficial acts were left to die in Congress. Still others were instituted and subsequently allowed to expire or fall unregulated.

Today, all states continue to maintain Adult Protective Services (APS), though a few extend these services only to the elderly and eliminate help for the disabled and impaired. APS investigates clients of concern, works with the client to provide an adequate treatment or care plan, assists the client in obtaining services, and provides ongoing counseling and monitoring of the care plan.

Although Oklahoma APS ultimately ensured Deborah Ramirez was admitted to the hospital and that Carmella Saldana was held responsible for her bed sores and later death, should they have kept a closer watch on her care? Perhaps. However, underfunding potentially played a role in the minimal amount of oversight in the Ramirez case, and Oklahoma is not alone. Other states share similar woes regarding staffing and funding.

Bed sores are a preventable injury, and resulting infections can be kept at bay if caregivers follow simple suggested steps. Families can only go so far when it comes to overseeing loved ones’ care, necessitating experienced monitoring of at-risk adults. Ensuring APS is ready to provide adequate oversight of all nursing homes, private caregivers, and family members responsible for caring for their loved ones could save lives.