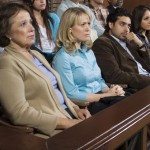 Large monetary awards are not uncommon in nursing home abuse lawsuits that involve elder care neglect, inadequate nursing care or outright abuse caused by the victim’s caregivers or facility. This includes the $200 million verdict awarding compensatory and punitive damages to the estate of 92-year-old Elvira Nunziata against her Pinellas Park Florida nursing facility after she died from falling down their stairwell. At the time of the incident, Elvira was suffering from dementia and bound to a wheelchair. Court documents indicate that she gained access to the facility stairwell in her wheelchair through a door presumably left open by a member of the nursing staff who had likely gone outside to smoke a cigarette.

In another lawsuit filed in Hopkins County Kentucky, a trial jury awarded financial compensation to surviving family members of 92-year-old Joseph Clint Offutt who died by the alleged neglect of nursing staff at a Madisonville nursing facility. Family survivors filed the lawsuit after it was determined that Joseph was lethally dehydrated during his stay at the facility even though he was attached to a feeding tube. Court documents allege dehydration because of a nursing staff’s failure to ensure Offutt was receiving adequate water to survive. Joseph’s was only at the nursing facility for a brief time between March 25 and April 3, 2008 before being transferred to a local medical center where he succumbed to his condition two days later.

Both of these cases were filed against nursing home defendants for both compensatory (financial recompense) and punitive damages based on allegations of neglect and abuse that included malnutrition, dehydration, infections and bedsores that ultimately led to death.

Residents of nursing facilities receiving inadequate care is nothing new. In fact, out of the more than 1 million US nursing home residents, many often face serious medical care and horrendous living conditions in nursing facilities that are inadequately staffed or lack competently trained nurses and nurses’ aides. The American Medical Association (AMA) defines nursing home abuse, neglect and mistreatment as any action or lack of action resulting in harm or threatened harm to the welfare or health of elders.

Many residents do not receive adequate health and hygiene services even if the staff is attempting to provide everyone the best care possible when there is simply not enough nurses and nurses’ aides to provide quality care. Additionally, employees that are overworked and working in an understaffed nursing environment often become frustrated with their jobs at the expense of the residents who were often America’s most vulnerable citizens.

Choosing the best nursing facility is not always an easy decision even after performing comprehensive research and looking at facts and figures of available nursing homes within a region, city or county. This is because Medicare and Medicaid surveyors typically only perform routine inspections annually and usually only arrive unexpectedly for survey after a serious complaint of alleged abuse or neglect is filed.

In December 2014, the Attorney General for New Mexico filed suit against one of the largest nursing facility chains in the United States over the home’s lack of providing quality care to its residents. This type of lawsuit is a novel approach targeting seven nursing facilities operated by Plano, Texas Preferred Care Partners Management Group that operates homes in 10 states. The lawsuit is in response to evidence showing that the facility’s nursing assistants were overwhelmed with work and unable to assist residents to shower or change their diapers in a timely manner. Other charges allege there were not enough employees working to assist incapacitated residents to drink or eat, leaving many of them deprived of water and food.

What to do if You Suspect Poor Nursing Home Care?

Many surviving family members who lost loved ones while they resided at nursing facilities have taken legal action against the nursing facility and staff. The nursing home abuse attorneys at Nursing Home Law Center LLC (800) 926-7565 can assist surviving families when seeking financial compensation from those whose actions took the life of their loved one. These types of cases are accepted on contingency to avoid the need of paying the law firm an upfront fee.