When a patient develops a bedsore, pus and other fluid can leak out of blood vessels and into other tissues. The pus is made of cells, proteins and other solid materials. This material is called exudate.

Often, exudate can dry and crust over a wound. This makes it hard to assess the severity of the bedsore. A wound vac may be applied to get rid of the exudate and allow the wound to heal.

A bedsore forms when a patient has been lying immobile for too long. The pressure of the mattress or other surface on the body cuts off the blood flow. When the blood flow is cut off, the tissues in the area become deprived of oxygen and eventually die.

When they die, the dead skin breaks up and exposes the tissue underneath. A wound like a crater forms and this wound is called a bedsore. It can also be called a pressure sore or a decubitus ulcer.

Pressure sores grow in severity over time, and this severity determines their category.

Where do Bedsores Usually Form?

Pressure sores can form anywhere on the body. All that is required is pressure against a surface applied over time with few or no intervals of relief. Certain parts of the body are more likely to sustain pressure when a patient is immobile, and these can vary depending on the position the patient is in.

Body parts with little fat are at increased risk of developing bedsores. Fat can act as a cushion to relieve pressure. Without it, some parts of the body are more vulnerable.

The body parts that most frequently develop bedsores are:

What Treatment is There for Bedsores? 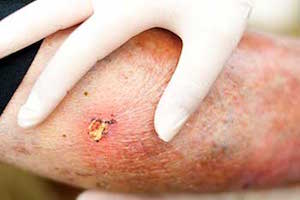