What Areas of the Body are Prone to Develop Bed Sores? 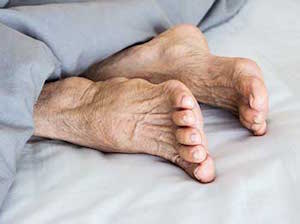 Bedsores develop where constant pressure to a body part cuts off the blood flow. Those body parts that come in contact with the mattress when we lie down, or with the chair when we sit, are usually the ones where bedsores develop. In addition to this, the amount of fat can influence the development of bedsores. Fat acts as a cushion for the body and relieves pressure. If a body part has little fat insulation, it will be at higher risk for developing bedsores.

The most common areas where pressure sores occur include:

A bedsore is a wound on a body that develops because continuous pressure on a part of the body cut off the blood flow. With the blood cut off, the tissue and skin in the area began to die. Eventually, the skin and the tissue underneath can wear away. It is not usually an issue with normal, healthy individuals who are moving around and can shift position in bed. When patients become confined to a bed or wheelchair, however, their risk increases. Bedsores are also referred to as pressure sores or decubitus ulcers.

Who is at Risk?

The most at risk population are those who lack the ability or the energy to move themselves, and those whose capacity to heal has been compromised. The conditions that increase the risk of bedsores include:

Medical professionals caring for patients with the above conditions should check the at-risk parts of the body with special care.