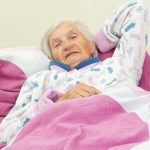 Lots of residents deal with bed sores for much of the same reason that they enter a nursing home in the first place. They have difficulty moving around or taking care of themselves and these issues present the possibility that they can develop bed sores (also called decubitus ulcers or pressure sores).

Most of the time, they arise when too much force is put on area of the body over too long a time or when friction rips open the skin. Generally, they spread and worsen when nursing home employees don’t regularly check for them or employ standard practices.

In the next few pages, we have summarized some Virginia nursing home lawsuits that include bed sore injuries. We do this to show you the problem and the solution. Courts can offer you or your loved one an opportunity to recover if you have been injured in a nursing home.

The resident that brought this lawsuit in Virginia noticed she had bed sores after a family member pointed them out to her. Unfortunately, staff at the facility were unable to detect their emergence or growth along her upper thigh as well as along the middle part of her spine.

Once news of the sores was brought to their attention, they took immediate action to rectify the situation in coordination with her doctors. Treatments included various prescriptions, rotations, but did not extend to surgery because the pressure sores were not serious enough to require that procedure thankfully.

Although, they were concerned about the possibility of the sites becoming infected and then that infection spreading throughout her body. That did not come to fruition but she suffered pain, scarring, and other problems.

To recover for these issues, she sued the nursing home. She argued that its negligent care was the reason why she developed bed sores and that she would not have if it acted appropriately. The nursing home disagreed. It offered in the alternative that her bed sores were the outgrowth of her pre-existing conditions including immobility and obesity among others.

Yet, this line of thinking could not explain some of its own failures and how they contributed to the woman’s condition. This prompted settlement in an effort to avoid the time and expense of trial. The woman received $175,000 which was notably larger than her expenses but significantly smaller than the average. That amount can be attributed to the fact that the sores were spotted and treated before they could reach a critical stage.

The resident’s sores in this case developed before her doctors had any legitimate chance to control and confine them. They started off on her heel but became infected over time and that infection soon affected the neighboring area.

Physicians transferred her to an intensive unit to receive specialized treatment and procedures. They performed debridement to take care of the affected site and then pumped in a steady stream of medications to ensure that her overall health was not threatened with the infection. Eventually, the situation was stabilized but doctors maintained that she would need long-term care and support to make sure this did not happen again and to fix what already happened.

To afford this ongoing treatment and past bills she already accumulated, she sued the nursing home where she developed bed sores occurred. She sought compensation for her past pain, future suffering, and expenses.

The defendant did not admit any of the allegations contained in the complaint but, rather, settled the matter out of court for the amount listed above and thereby averted any chance of trial.

A lot of residents in Virginia nursing homes enter facilities with a predisposition to or history of bed sores. This case was no different. The man was transferred to the nursing home in question to be closer to his family.

He was in his early eighties and had a few bed sores before coming here. Nearly six months into his stay he started to show signs of blistering and sores right around the original sites. Nursing home staff and his medical providers immediately coordinated a plan of care to correct the problem and ensure that it did not spread to the rest of his body.

When he eventually brought a nursing home lawsuit against the institution, it basically sought to collect damages for the out-of-pocket expenses that the incident caused him. The nursing home and the plaintiff reached an out-of-court settlement for the amount listed.

It was reduced down to that figure because of some extenuating circumstances including the following:

This cause of action was brought by the family of a man who passed away under the care of a care facility. He had a history of several serious medical issues including bed sores and heart complications but they also worsened significantly and rapid during his time at this nursing home.

Once they realized the nature of the institution’s neglect, they filed the lawsuit in Virginia court. It sought compensation for his wrongful death and pain as well as their losses and expenses. Specifically, the complaint alleged that his bed sores deteriorated so critically that it infected his entire health took his life even.

They claimed that absent this negligent care he would have been alive today and that the nursing home should pay damages for that fact. The nursing home offered a reply but neither side was able to make its cases to the jury because they settled prior to the commencement of opening arguments.

Bed sore cases tend to be complicated on the facts because they involve difficult medical concepts. However, look at these takeaways to ensure that you are competent on the laws governing these nursing home lawsuits:

Did Your Family Member get Bed Sores in a Virginia Nursing Home?

If your loved one experienced bed sores at a Virginia nursing home, then call us right away. The attorneys at Nursing Home Law News can quickly move to preserve all evidence, information, and witnesses necessary to collect in court.

We have extensive experience protecting the rights of nursing home residents in Virginia. We can put that to work for you immediately and at no upfront cost. To find out what you can get in court or settlement, give us a call! We will put you on the path to recovery right now!