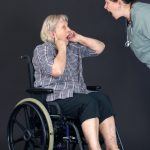 Virginia residents in nursing homes not only have to deal with their own problems of old age, infirmity, or handicap. Unfortunately, they also have to shoulder an incredible amount of abuse: physical, mental, financial, and even sexual.

Normally, abuse comes from those around them like a resident next door or staffer that works with them but it can also come from someone just passing by the area.

We summarized some Virginia nursing home abuse lawsuits for your review below to introduce you to this topic and the concept of recovery for this particular form of injustice.

A female resident brought this cause of action after another resident struck her in her face as she sat in her room. The exact circumstances of what led up to the altercation are not quite clear but the fight occurred in her room without the presence of any nursing home staff.

Why they were left by themselves is also undetermined and confusing because both residents suffered from different forms of mental disability. The victim had to be taken to the hospital for examination. She was seen by various physicians and underwent x-rays and diagnostic testing. They diagnosed with a broken nose as well as other personal injuries.

She sued the other resident for assault as well as the nursing home for negligence. As against the latter defendant, she maintained that it failed to construct proper safeguards for the protection of its residents and that she was harmed as a result of that failure.

Furthermore, she alleged that it had a duty to make sure that mentally disabled residents like her had added security. The nursing home put the blame squarely on the shoulders of the aggressor and implied that her intentional conduct exculpated any responsibility it might have.

However, once the extent of both of their mental limitations was established, it became clear that it was at fault more than it realized and it agreed to settle.

The woman recovered $200,000 which was to cover the following damages:

This controversy involved a long series of neglect. The resident complained in his lawsuit that over the course of several months he did not get sufficient medication, treatment, or general nourishment. In his opinion, the effect of this was an overall decline in the status of his health as well as substantial suffering.

He was able to successfully bolster his claim with evidence of neglect and the corresponding effects that it had by bringing in medical records and connecting the dots. However, he did not have clear injuries such as a broken bone or concussion or something else that a jury could point to as evidence of the home’s negligence.

This might explain the two parties’ rather low settlement figure. The man received just a little two hundred thousand dollars in compensation which would put him on the lower end of the recovery range for this kind of nursing home settlement in Virginia.

In this matter, a resident in a Virginia care facility was given improper and insufficient medication on a number of occasions. Eventually, the cumulative effect of the faulty care required him to be transferred to an ER so that he could receive immediate attention.

At that location, physicians attempted to stabilize his condition and undo the damage that was done. They were successful but he was still left in a much worse situation than before the events at the Virginia nursing home occurred.

After he was out of recovery, he sued the institution where he was living. He claimed they committed negligence and were the cause of his injuries and damages. In terms of compensation, he claimed economic, non-economic, and other losses.

He stated that he was experiencing ongoing pain from the affair and a reduced quality of life. Also, he pointed to medical bills, court fees, and other expenses that directly resulted from the nursing home’s malpractice.

The nursing home filed a reply then focused on ending the matter as swiftly as possible. The plaintiff received $375,000 which was lower than the average for Virginia nursing home cases but still significant when to the median. When discounting cases that included wrongful claims in nursing home lawsuits, this amount fared very well to the average.

This suit was filed by the estate of a woman that passed away shortly after being attacked in a Virginia nursing facility. A man jumped upon her and assaulted her in her room in the late hours of the night. Shortly after that incident, she had a heart attack. She never made it through the night.

Lawyers for the woman connected the dots and circled around the nursing home itself in addition to the man. They complained that institution did not conduct proper background checks, training procedures, or supervising controls requisite to keep its residents safe.

After a brief survey of the law and facts giving rise to this event, the nursing home essentially pleaded no contest.

They settled out of court not long after this controversy began. Then, the estate was left to seek recovery and justice from the man who actually attacked her.

They were able to go after the nursing home in the first place because these facilities owe a duty of care to generally provide for the security and wellbeing of their residents. If they grossly neglect this duty, then they can be sued when residents or staff members attack people within their walls.

After reading over the nursing home lawsuit summaries we provided above, try and answer these questions with your attorney to get a better sense of your right to collect in court:

Was Your Family Member Abused in a Virginia Nursing Home?

No matter what form of abuse you experience in a Virginia nursing home, remember that the attorneys at Nursing Home Law News are here to help. We can bring your case, fight for your rights, and persist until you get the compensation that you deserve.

Plus, we will not ask for a dime until you’re satisfied with the jury award or settlement amount. Contact our offices today and find out how we can put you on the road to recovery.