The Information You Need to Make Decisions That Matter
The Nursing Home Law Center is committed to providing the
legal resources necessary to hold negligent facilities accountable.
Learn More
Home
Nursing Home Abuse Lawyer
What is Elder Abuse?
Types of Abuse in Elderly

Types of Abuse in Elderly 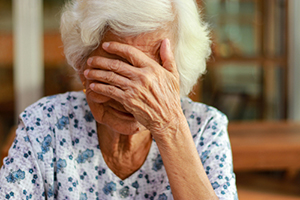 Abuse is a devastating reality for many elderly individuals. It can take many forms, from sexual abuse to physical and emotional abuse and neglect.

It's essential to identify the different types of elder abuse to take action and protect an older adult from further harm. Sexual abuse can take various forms, from unwanted touching and kissing to rape or sodomy.

Are you concerned about an elderly loved one being abused? Contact the nursing home abuse attorneys at Nursing Home Law Center for legal help. Our experienced attorneys will help you build a strong case and seek justice for the abuse you have suffered.

As our population ages, the potential for elder abuse increases. Though it can take many forms, elder abuse is generally defined as any action or inaction that results in harm to an older person.

Unfortunately, this type of abuse often goes unreported due to the victims' fear of retaliation or the victim is not aware they are being abused.

Elder abuse could be physical, emotional, sexual, or financial abuse. It is the failure to treat the individual with the dignity and respect they deserve.

Poor personal cleanliness, inadequate nutrition or hydration, untreated health problems, and withdrawal from social activities are signs that an older adult might be victim of abuse.

Older women are more vulnerable to elder abuse than men.

In the United States, one in every ten people over 60 is a victim of abuse, and nursing home abuse is a significant problem.

The National Center on Elder Abuse defines nursing home abuse as "a single, or repeated act, or lack of appropriate action, occurring within any relationship where there is an expectation of trust which causes harm or distress to an older person."

Nursing home residents suffering from psychological abuse can be at a higher risk for developing physical health problems, such as heart disease, respiratory illness, and gastrointestinal issues, than those who do not experience emotional abuse.

Elder Neglect in a Nursing Home

When older people can no longer care for themselves, they may need to go into a nursing home or will require at-home assistance for their basic needs. Nursing homes are places where people can receive around-the-clock care. However, sometimes residents in nursing homes are neglected by the staff.

Elder self-neglect happens when older adult neglects themselves, often by refusing to eat, bathe, or take care of their personal hygiene. Elder self-neglect can be very dangerous, as it can lead to health problems and even death.

Risk factors for elder self-neglect include: A serious or chronic illness, having a mental health condition, living in isolation, few social supports, and having a history of self-neglect

According to the National Center on Elder Abuse (NCEA), approximately 1 in 10 older adults in the United States experience elder abuse each year, equating to more than 5 million victims annually. However, this number is estimated to be only a fraction of the abuse cases, as most go unreported.

Statistics from the Centers for Disease Control and Prevention (CDC) show that one in three people over 65 will experience elder abuse, including unwanted sexual contact and physical and emotional abuse.

There are many causes of forms of elder abuse in elderly persons. Some of the most common causes include:

Different types of elder abuse that can be inflicted on an older adult: physical elder abuse, emotional or psychological abuse, unwanted sexual contact, and elder financial abuse are some of the most common.

Physical elder abuse is force against an older person that results in bodily harm. It can take many forms, from slapping or shoving to punching, kicking, or even using a weapon.

Elderly abused persons are more likely to suffer from serious health problems, including injuries, infections, and death. They may also be more likely to require hospitalization.

One common type of elder abuse in the elderly population is psychological or emotional elder abuse involving things like verbal assaults, humiliation, or intimidation. Often, the abuser will be a family member or caregiver of the older person.

Emotional elder abuse can have several negative consequences for the older person, including decreased self-esteem, depression, and even suicide.

Sexual abuse in advanced age is a severe problem that often goes unreported. It’s a type of elder abuse that can include unwanted sexual interaction or sexual contact, rape, or sexual assault.

Elderly adults may be afraid to report elder abuse to a family member or local adult protective services even when in immediate danger because they feel they won't be believed. In addition, they may not know who to turn to for professional medical advice.

One of the most important things we can do to prevent sexual abuse in nursing homes is to be vigilant and speak up if we see or suspect anything wrong.

We can do a few key things to help protect ourselves and others from abuse in nursing homes. We should always be aware of our surroundings and who is around us, especially when we're alone with someone we don't know well.

Financial abuse can be a challenge to identify. However, some common signs may indicate that financial abuse is happening in a nursing home.

Some common signs of elder abuse involving financial abuse include:

It can be challenging to identify elder abuse, as the signs may not be obvious. However, some warning signs may suggest that an older adult is being abused.

Some of the most common warning signs of elder abuse include:

Some Results of Nursing Home Abuse

Some injuries deriving from forms of elder abuse include:

How to Prevent Elder Neglect and Abuse in Nursing Home Facilities

There are many ways to prevent elderly abuse, and it is vital to be proactive to protect your loved ones.

Some steps you can take to help prevent nursing home abuse include:

It's crucial to report elder abuse to the nearest local adult protective services agency if you see it happening.

How to Prevent Financial Elder Abuse

To prevent financial elder abuse, families and friends of elderly loved ones should be aware of the warning signs, including changes in bank account activity, suddenly being unable to afford basic needs, or being coerced or manipulated into signing documents.

Financial elder exploitation can be perpetrated by anyone, including friends, caretakers, financial advisors, or family members.

The National Center on Elder Abuse (NCEA) is a resource of information and technical assistance on elder abuse.

NCEA was established in 1990 by the U.S. Department of Health and Human Services as the first national center in the United States focused exclusively on nursing home elder abuse.

The mission of NCEA is to promote the well-being and protect the rights of older adults through information and education, policy development, and service delivery.

The National Council on Aging

The National Council on Aging, also known as NCOA, is a nonprofit organization that helps older adults live independently.

They provide information and resources on various topics related to aging, including health, finances, and legal issues. The National Council on Aging also advocates for policies that improve the lives of older adults.

There are a few things to keep in mind when filing an elderly abuse lawsuit:

You may also recover punitive damages intended to punish the abuser in some cases.

While it is impossible to know the exact settlement amount in any given elder abuse case, there are several examples of average settlements in such cases. In one case, a nursing home resident was raped by another resident. The victim's family reached a $750,000 settlement with the nursing home.

In another case, an older woman was neglected by her home health aide, which led to her death. The family reached a $1.5 million settlement with the aide's employer.

Given the serious and often life-altering injuries resulting from elder abuse, it is not surprising that the average settlement amount tends to be relatively high.

Elder abuse is a serious issue, but with the help of an experienced lawyer, you can get the justice and closure you deserve.

Were you or someone you know a victim of elder abuse? Our dedicated lawyers will work tirelessly to ensure that your voice is heard and those responsible for this crime are brought to justice. Contact us toll-free at (800) 926-7565 for a free legal case review.

Our nursing home abuse lawyers operate on a contingency fee basis, so you don't have to pay us unless we win your case.