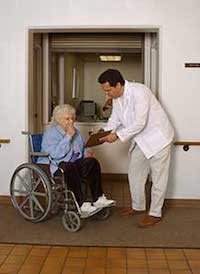 In 2010, the first of several lawsuits were filed against Madison Manor, a Richmond, Kentucky nursing home. The first, filed May 11 by Donna Anderson, claimed that staff members at Madison Manor allowed a severe bedsore to develop on husband Richard Anderson's foot while he was a patient there from April 4 to May 22, 2009. The sore soon became infected, resulting in the surgical amputation of Mr. Anderson's leg, followed by his eventual death.

Bedsores, also known as pressure sores, pressure ulcers or decubitus ulcers, are areas of the skin that are exposed to constant pressure. Over time, the capillaries supplying the surrounding tissues are compressed, resulting in reduced blood flow to the area and reduced oxygen and nutrient supply. Tissues starved of oxygen and nutrients begin to break down and die, forming an open sore on the affected area.

If care is not taken to ensure proper sanitary procedures, infection can easily become introduced into a pressure sore. Adequate hygiene of the patient’s skin, proper handwashing techniques, and sanitation of the surrounding bed linens and clothing are essential to prevent the spread of infection. Secondary infections include sepsis, gangrene, MRSA, and cellulitis. In Mr. Anderson’s case, secondary infection led to an amputation and eventual death.

Sepsis in Other Patients

The second lawsuit was filed on June 16 by David Drury. Drury's mother, Lena McKinney, was a patient at the facility from December 24, 2008, to July 22, 2009. Drury claims that his mother, like Richard Anderson, was also a victim of negligent care. In his case, Mr. Drury claims that negligence led to kidney infections, renal failure, sepsis, and eventually septic shock, in addition to several falls and severe weight loss.

Kidney or upper urinary tract infections can result from bacteria introduced into the urethra through improper wiping procedures or catheterization techniques. Urinary tract infections are common, but if left untreated, can lead to severe infections and even renal failure. Rarely, the body can develop sepsis, a state in which it no longer attempts to fight infection but turns on itself. When organ systems are already compromised, such as in Mrs. McKinney’s case, sepsis can quickly turn fatal.

The two 2010 cases, however, are only the tip of the iceberg when it comes to Madison Manor, its sister nursing home Kenwood Health, and parent company Extendicare. Between 2010 and 2014, 14 cases were filed against Extendicare-owned facilities in Richmond. All the cases involved some form of neglect or abuse on the part of Madison Manor or Kenwood Health.

Worse yet, between 2009 and 2012, 43 civil lawsuits were filed against Extendicare-owned facilities in the state, with multiple mentions of bedsores. Settlements in the cases remained private, but a frightening theme emerged – Extendicare patients were falling, developing bedsores, malnutrition, and dehydration and simple infections were turning fatal. Why?

Fraud and Abuse are Uncovered

Families learned that in 2009, three former nurse's aides were charged with neglect, wanton abuse, and reckless abuse of patients at Madison Manor. In a 2008 series of incidents, Amanda Sailee refused to feed an 84-year-old resident and withheld her food over time later eating the food herself in order to torment the patient. Additionally, Sailee was also charged with failing to clean the same patient properly, resulting in infection.

Sailee’s actions were caught on hidden camera by the patient’s family, who suspected abuse, but the patient died before Sailee was indicted in 2009. Two other women were charged with reckless abuse and neglect at that same time. Jaclyn VanWinkle received a 12-month jail sentence, while the details of Valerie Lamb's case were kept confidential. Because of the arrests, the Medicaid Fraud and Abuse Control Division opened an investigation, though the findings were never released.

In May of 2012, Extendicare announced that it would lease all of its 21 Kentucky nursing homes, including Madison Manor and Kenwood Health, to a firm operating out of another state. Overall, 43 open cases, including 5 wrongful death suits and one negligent care suit at that time, prompted the move. Extendicare claimed that worsening litigation and a lack of tort reform in the state made operations too costly.

Should Extendicare have done more to combat abuse and neglect in its facilities? Juries say yes, awarding damages in many of the cases mentioned. However, families are often left wondering what they could have done to help loved ones. Families should be vigilant and watch for the following signs of nursing home abuse:

Above all, don’t ignore a bad feeling or reported abuse from a loved one – the sheer number of Kentucky cases mentioned above hint that a gut feeling is not always wrong.

If you suspect a loved one is suffering nursing home abuse, contact your state's helpline and an attorney as soon as possible.