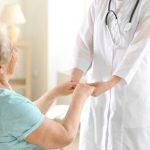 If you keep reading, we review some cases were nursing facilities across the state doled out inadequate care and residents suffered all kinds of injuries: physical, mental, financial.

We assist victims of nursing home negligence. If you have been hurt while in the care of one, contact us so that we can explain how we can help you! You deserve it!

The victim was an elderly woman who had been living at the facility for a long time. What happened was that as they were moving here from the home to the hospital, she tripped over one of them and fell. The damage was much more severe than what you might expect from a normal accident.

She broke her ankle and tore a ligament in her knee. Since that incident, she continued to experience a lot of pain and had to work with physical therapists on the new disability. She sued the people who were moving her as well as the nursing home.

Under the doctrine of respondeat superior, she claimed that the home was responsible since the movers technically worked for it. The nursing home denied this allegation as well as most of the claims in her lawsuit.

It alleged that her damages were not that severe and the matter went to court to settle the issue. After both sides had their say in front of a jury, it found for the plaintiff in the amount of $470,000.

Here are some points that support the verdict:

What might be fascinating about this case is how common it seems to be. The setting, victim, and accident sound the same as a lot of other lawsuits. Here, it’s a woman in her middle seventies living at a nursing home in Charleston, South Carolina. She passed away while living there and her family chose to bring suit against the institution.

They alleged a number of errors that the facility committed including a lack of supervision, employees, or resources. The consequence of all these missteps, in their opinion, was that she suffered abuse, dehydration, malnutrition, and a variety of other harms.

They sought damages for all these things. As you can expect, the defendant denied all fault. It said that it delivered the proper standard of care to her and should be free of all blame.

The two sides went back and forth for awhile but eventually found room to settle for $75,000.

Here are some things to remember about this lawsuit:

This female nursing home resident turned South Carolina plaintiff was ostensibly a victim of deficient service. She suffered from malnutrition, dehydration, and constipation while living at the facility involved in the dispute. In fact, the latter condition got so bad that she sustained an injury to her rectum. She sued the home in court because the incident left her with significant pain as well as a serious amount of medical bills.

Her complaint alleged a series of faults on behalf of the defendant facility including a lack of care, employees, and supervision. She sought various forms of legal relief for her tangible and intangible damages.

The defendant wholeheartedly disagreed with the bases of the plaintiff’s lawsuit. It countered that it gave her the requisite standard of care; the plaintiff had not been injured to the extent that she claimed; and that it could not answer some of the plaintiff’s contentions because it didn’t have enough information.

Possibly because of this last point, the nursing home still offered $200,000 to settle; however, the plaintiff had other things going for her including the following:

This case was very complicated. The nursing home resident involved was extremely ill prior to the events described in the lawsuit. She was fifty-two and a quadriplegic who was suffering from multiple serious health conditions. However, while under the care of the defendant nursing home, she died.

Her family and their lawyers looked at the incident and decided that it occurred because of the misconduct of the nursing home. They argued in their complaint that the nursing home didn’t properly hire or train employees to care for residents like her.

Also, they said that the facility didn’t put in place procedures to stop these events from happening. The defendant nursing home disagreed. It replied that it did all that it could and couldn’t be held liable for something beyond its control.

The matter looked like it was going to trial until they decided to settle for $300,000 just before it started.

Here are some takeaways from this case:

This nursing home incident happened to a relatively young resident. He had barely turned fifty when the events of this lawsuit transpired. Prior to the event, however, he sought treatment and care in the first place because he was suffering from a number of health problems that he could not manage on his own.

This led him to enter this particular nursing home in Anderson County, South Carolina. However, not long after he was admitted there, it became apparent that he would not get the amount and kind of care that his health required.

The evidence was clear and fatal when he was passed away at a remarkably young age from a number of preventable causes. Representatives of his estate filed a lawsuit in court for damages soon thereafter. They alleged that the nursing home committed a number of failures including general neglect and an inability to care for his particular conditions such as constant urinary tract infections.

They sought compensation for wrongful death and negligence for the pain, suffering, and expense of the incident.

The plaintiffs received $500,000 in settlement from the nursing home probably because of these facts:

This particular nursing home resident suffered a terrible ordeal: bed sores; dehydration; malnutrition; a knee amputation; and even death. Apparently, once the nursing home where she was staying discovered how dire her situation was, they transferred her immediately to a local hospital. After doctors evaluated her condition at that facility, they moved her to another location where she could receive specialized attention and care.

However, it wasn’t enough to prevent her rapid descent and eventual death. Lawyers for the woman’s family brought suit against her doctors and the nursing home as well as some of the hospitals that she stayed along the way. They alleged that their combined misconduct caused her death.

With respect to the nursing home, the complaint alleged that the facility completely failed its duty to watch over her and care for her and that it was largely responsible for the bed sores and amputation.

The defendant nursing home denied this theory and in reply stated that the events would have happened regardless of what it did because of her old age and pre-existing conditions.

Here’s why that number is rather low:

This lawsuit involved one elderly female resident and a lot of neglect on behalf of the nursing home. As she was being admitted to the care facility, her doctors instructed the staff to put procedures into effect that would keep her from falling because she was at high risk for falls.

However, they did not do as they were instructed and she fell on a number of occasions. Eventually, injuries that she sustained from one of the falls even killed her. She was survived by a number of children and grandchildren.

They decided to bring a lawsuit against the facility to recover compensation for the cost and pain that the death caused them. Their suit alleged that the nursing home’s deficient care caused her death and that they had the legal right to recover under South Carolina law.

The defendant denied these claims but didn’t want to go to trial so it offered to settle and the plaintiffs accepted for $500,000.

Here are some facts that might help you understand this settlement agreement:

This incident started off small and insignificant but ended up being very serious and costly. The victim was an elderly woman living in a nursing home. One day she needed to use the restroom so she called for assistance.

The nursing home staff came and helped her get to the bathroom but then left her there by herself. While she was using the facilities, she fell and injured herself.

Her harms were not minor. She sustained a subdural hematoma, herniated disc, and other various injuries. Her medical bills to fix these things were over $10,000.

To make up for the damage that this incident caused, she brought a lawsuit against the nursing home where she was staying at the time. Her complaint made out a claim of negligence and, in particular, alleged that the defendant facility should have trained its employees better and monitored more carefully.

She sought compensation for the damages that ensued.

The defendant decided to settle and she received $175,000 most likely because of the following:

The victim in this incident died from a combination of health conditions including dehydration, anemia, and a staph infection.

The woman’s family brought suit against the nursing home for negligence and wrongful death. They contended that the facility’s deficient care was the cause of her suffering, death, and expenses.

They sought all recovery available under South Carolina law. The defendant nursing home denied that it was responsible for her passing and instead pointed to other possible causes for her death.

Yet, as the trial approached, they chose to settle with the plaintiffs for $425,000.

Here are some important points to remember about this settlement value:

Nursing home facilities have a duty to provide proper care and supervision to each of its residents. If they don’t deliver on that promise, then they owe the people that they failed whatever it takes to make them whole again. Here are some important questions regarding South Carolina nursing home litigation with inadequate care:

Was Your Loved One the Victim of Inadequate Care at a South Carolina Nursing Home?

Attorneys at Nursing Home Law News manage cases of inadequate care in nursing homes across South Carolina. We also assist other firms in many other states. These kinds of lawsuit present novel and challenging issues but with a thorough understanding of the law and sufficient resources, you should be able to overcome all of them.

If you were injured while in the care of a nursing home, call our firm so that we can guarantee you get the legal help you need.