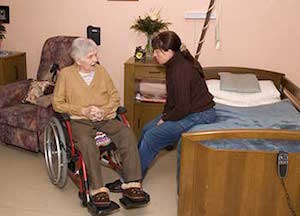 If you’ve ever wondered just how bad life in a poorly rated nursing home is, take a look at a recent investigative article by Sam Roe of the Chicago Tribune. Mr. Roe’s article chronicles life at Berwyn Rehabilitation Center, a Chicago, Illinois nursing home that received one-star in all major categories by the Medicare rating system. The article illustrates what living conditions are like for patients in a poorly rated facility. Sadly, despite the poor ratings and dangerous living conditions, facilities such as Berwyn Rehabilitation continue to receive federal funding.

The star-ratings of nursing home is a recent feature on Medicare’s Nursing Home Compare website that has information on the more than 16,000 nursing homes in the United States. Nursing homes are rated on a one to five- star system in categories important to patient care based on information contained in: staffing levels, nursing home surveys and overall quality measures.

Surely, the Medicare ratings assigned to facilities such as Berwyn Rehabilitation can only tip-off patients as to what may lay behind the doors of the facility, but the details of the living conditions chronicled during inspections at Berwyn Rehabilitation certainly indicate the the low ratings may be well founded.

In response to the poor Medicare ratings and survey findings, a new nursing director was recently installed at Berwyn Rehabilitation. “This nursing home was really bad,” according to Anjanette Miller, the recently appointed director of nursing. Not surprisingly, Ms. Miller attributes staffing problems as the major culprit behind the facilities poor reputation. Nursing home staff “were punching in and doing nothing,” she added.

Despite a recent shake-up with the appointment of a new director of nursing and implementation of new management team, problems at Berwyn Rehabilitation Center persist. After these new measures were put into place an inspection of the nursing home confirmed patient safety violations remain. For example, a resident became entrapped between an inflatable mattress and the bed rails on his bed even after earlier inspections had brought this problem to the attention of the facility.

An autopsy conducted by the Cook County Medical Examiner determined that the patients death was due to the suffocation related to the entrapment. An investigation into his death revealed the facility was using improperly fitted rails that were arbitrarily replaced by a nursing home employee shortly before his death.

Certainly, as we can see in situations such as this, sometimes a meager Medicare rating is well deserved.