A settlement was reached this month between Houghton Lakeview — a nursing home — the state of Washington’s Department of Social and Health Services and the family of Jean Rudolph, who died in 2008 from complications due to stage four pressure sores while under the care of a Houghton Lakeview owned home. The same home had already been cited multiple times for inadequate care and violations of the law. The DSHS failed to act, however, and the department’s inaction was attributed to Rudolph’s death as a contributing factor. Houghton Lakeview and the DSHS agreed to a $900,000 settlement with her family. 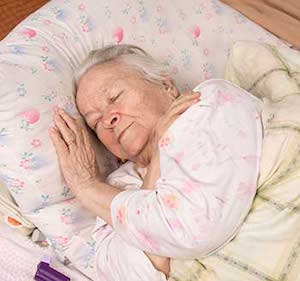 Jean had developed stage four pressure sores that reached the bone and the nursing home hid the condition, failing to notify the family or bring her to a hospital for emergency care. After 22 days, she was finally taken to the emergency room, but by then it was too late. Rudolph was 87 years old and a retired nursing educator who suffered from Alzheimer’s disease. Her condition prevented her from communicating about her bedsores to her family and the nursing home staff refused to provide her with proper care once they discovered that she had the sores.

When bedsores are allowed to develop for long periods of time, they become infected. The sores themselves cause death to the cells in the surrounding area, but septic shock from a severe infection is often what actually kills the patient. If Rudolph had received treatment earlier for her pressure sores, she may have lived.

A Track Record of Abuse

The nursing home that cared for Jean had established a long track record for noncompliance with the law. On 33 different occasions, the home received citations for substandard care and living conditions, the home employed two convicted felons and two of the home’s staff had forged credentials. After 11 flagrant offenses, the Houghton Lakeview home caught the attention of a DSHS investigator in 2007, who suggested that it have its license revoked for repeated offenses and alleged abuse.

Supervisors objected and overruled the investigator — deciding instead to impose a $200 fine and allow the nursing home to retain its license. The department is required to publish reports of abuse on its website so that citizens throughout Washington are able to make educated decisions about the nursing home that they choose to entrust with the care of their loved ones. Rudolph’s family members were never informed of the nursing home’s prior record and it was never published.

The Houghton Lakeview investigation bears striking similarity to another case involving pressure sores that were neglected in a home in Tacoma. After 135 serious violations, investigators suggested that the home be revoked of its licenses and supervisors overruled, just as they had in the Houghton Lakeview case. In 2009, the department paid a settlement of $565,000 to the family of Nadra McSherry, who went for a month with untreated bedsores before she died of complications. Investigators made strong recommendations to shut the nursing home down before McSherry was afflicted with her bedsores, but the department did nothing.

Over 400 nursing homes across the state of Washington have been cited for inadequate conditions or care in the last year. The DSHS continues to sit on its hands as senior citizens suffer from poor living conditions and neglect. If the department stepped up and defended the state’s own policies, many of the reported cases of abuse could have been prevented. Both the nursing home in Tacoma and Houghton Lakeview remain licensed in the state of Washington, however, pointing out a fatal flaw in the system that can’t be solved by paying settlement after settlement.