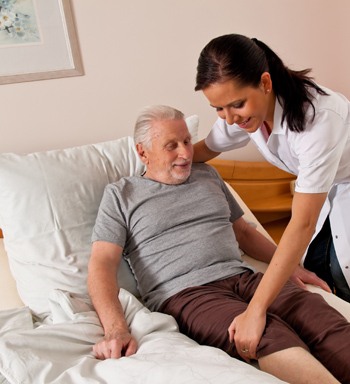 A wrongful death lawsuit filed against a nursing home in Richmond, Virginia highlights the dangers of pressure ulcers and reveals the pain and suffering patients go through when their caregivers ignore their conditions. Donald Shelton eventually developed respiratory distress and went into septic shock after multiple wounds across his body were allowed to fester and become deeply infected.

Allegations include the failure of the nursing home to wash Shelton, provide clean living quarters or to take measures to treat Shelton’s wound despite being made aware of their presence. Our nursing home abuse and neglect attorneys recognize the sad reality that this type of treatment is not an isolated event; and we are here to fight on behalf of victims everywhere.

Madison Health and Rehabilitation is a long term care facility that was supposed to continue Donald Shelton’s treatment and care for his needs moving forward, but his stay there lasted only eight days. The level of neglect shown is egregious in that he was not bathed during his stay and his health deteriorated at an alarming pace. In addition to the festering of his original wounds, he developed two bedsores that had caused necrosis all the way to the bone. His genitals were also in a necrotic state and appeared black, according to the plaintiff in the lawsuit.

After eight days of suffering due to neglect, Shelton was admitted to Baptist Health— suffering from respiratory distress and sepsis, which is a serious infection of the blood that occurs when bacteria spread from a wound into the bloodstream. These bacteria are then able to attack organs throughout the entire body. Nothing could be done to save Shelton’s life and he passed away a day later.

Among the defendants listed in the lawsuit are Madison Health and Rehabilitation Center’s affiliated companies. Vicarious liability occurs when a company is held directly accountable for actions of employees or partners due to policies that are considered negligent or abusive. The administrator of Shelton’s estate alleges that all of the companies associated with Madison Health and Rehabilitation Center contributed to Shelton’s injuries and death through the systemic promotion of understaffing, poor budget practices, policy and protocols that neglect patient needs and other systemic failures that suggest blatant disregard for the patients these companies seek to serve.

The facility’s nursing director is also named in the lawsuit, implying that the administration of any nursing home should be aware of such incidents of gross negligence. Shelton was denied medical attention for existing wounds, did not receive any form of hygiene over eight days and his dietary needs were ignored. It is also evident that there was no treatment plan in place which addressed his conditions and risks.

Simple attention, repositioning and medication were all that were needed to treat Shelton’s wounds and to prevent the development of others. The extreme lack of compassion shown by caregivers and the administration have prompted the plaintiff to seek punitive damages as compensation for the victim’s suffering, emotional anguish, loss of dignity and complete lack of quality of living.

The nursing injury lawyers of Nursing Home Law Center LLC take on an alarming number of cases arising due to neglect. It is easy to demonize nursing staff members, but we recognize that their errors are often only the symptom of a systemic problem that has developed with the rise in prominence of for profit nursing chains and the drastic defunding of senior healthcare funding. Simply put, it is often not the staffers’ faults for being stretched thin and unable to devote adequate time to every patient.

Instead, the fault lies with the nursing companies themselves, the way they are administrated and their policies and protocols. Understaffing sends a clear message to the public that demands a response— profits over people. Our response must be aggressive and unforgiving by demanding negligent nursing centers suffer severe financial penalties for such carelessness and greed.

If your loved one has been injured due to poor nursing care, contact us today to be connected with an award winning nursing home abuse and neglect attorney. We work entirely on contingency, so the success of your case is integral to our own. Once we have all of the information we need, we can investigate your claim and let you know what your legal options are so that you know what to expect. If we fail to secure compensation on your behalf, our services are free.

Learn more about the laws applicable to Virginia nursing homes here.
Click on the links for information on nursing homes in Virginia Beach, Norfolk and Richmond