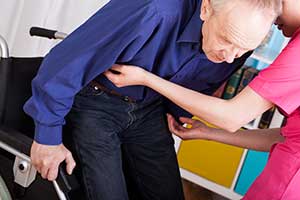 When nursing care center staff members are worn thin due to limited resources and understaffing, it is very likely that they will make mistakes which have serious consequences. Regardless of their intentions, it is important that the people who are injured due to their negligence receive the compensation they deserve for things such as medical costs and the physical and emotional suffering the victim has endured. The nursing home abuse and neglect attorneys of Nursing Home Law Center LLC occasionally witness the devastating toll that these mistakes have on families when the victim does not survive following an accident.

Inability of Staff to Supervise Patient Cited in Lawsuit

Carmello Rufo fell when attempting a transfer from her wheelchair on March 14 of 2016 and was pronounced dead on April 2 due to complications directly related to her injuries. Marilyn Rufo has since brought a lawsuit against the nursing home and management agency tasked with Carmello’s care and safety alleging that Carmello’s death was due to the failure of caregivers to provide appropriate and attentive care. In addition to claims that Rufo’s accident was due to negligent care, Marilyn Rufo has also alleged that facility staff refused to evaluate her condition after the fall.

It is surprisingly common for nursing centers to make attempts to cover up mistakes and these attempts serve only to exacerbate injuries and put patients at risk. Reporting an accident and performing a medical evaluation require admitting that the center’s staff allowed the incident to occur under their watch and cover ups are an irrational attempt to avoid responsibility.

What strikes us as the most incredulous aspect of the incident is the refusal of staff to seek medical attention on behalf of Carmello Rufo. This decision could have been the difference between saving her and letting her die, but we will never know how things would have turned out had staff members taken the right course of action. Rufo’s death is alleged to be the result of medical complications arising from her injuries and the delay in medical response.

Marilyn Rufo is seeking damages from Lexington Health Care Center of Elmhurst as well as from Royal Management Corp. on the grounds that the management company deliberately understaffed the nursing center in favor of greater profit margins and failed to provide a safe and comfortable environment to patients. She also seeks compensation for the undignified manner Rufo was treated and the physical and emotional suffering she endured in her final days. Finally, she seeks damages due to loss of consortium.

It is possible for Rufo to be awarded punitive damages as a measure to set an example for other facilities in Illinois due to the fact that Illinois remains one of the states in the nation not to adopt caps on nursing home negligence damages. This allows juries to decide whether the appalling disregard for a victim’s safety should carry damages in excess of the compensatory damages that equal the value of the victim’s medical expenses and pain and suffering.

The nursing home abuse and neglect attorneys of Nursing Home Law Center LLC pay close attention to cases such as this one as they often set precedents for other cases with similar circumstances. We have watched an unfortunate rise in the number of abuse cases over the last 15 years due to massive cuts to Medicare and the influx of many for-profit companies into the nursing care industry. It is time to fight back, and we will help you find the justice you seek if your loved one has been mistreated, neglected or abused.

Contact us today to arrange a free consultation with one of our  nursing injury lawyers so that we can let you know more about your legal options and rights. We work on a contingency basis, so you are guaranteed that you will not owe us a thing until we recover compensation on your behalf.