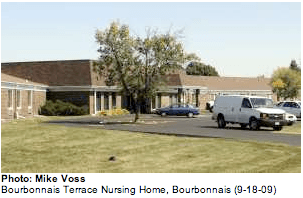 The state inspection also revealed that the alleged perpetrator has a history of mental illness and was also convicted of murder in 1990.  When making their report, nursing home officials failed to disclose the perpetrators criminal history.

“The facility did report the incident to us. But because of the way they wrote the report, we did not forward it to the state police,” Melanie Arnold, a spokesperson for the Illinois Department of Health said. “They left out some of the information that denotes this person was an identified offender.”

Situations such as this highlight some of the problems I encounter when prosecuting nursing home abuse and neglect cases.  Too often, nursing facilities take it upon themselves–  if and when to report situations involving harm to patients.  In this case, a fine is certainly justified because it certainly appears that nursing home officials deliberately attempted to cover-up this case of sex abuse.

Despite what certainly appears to be a ‘cover-up’ Bourbonnais Terrace announced it plans to appeal the fine.