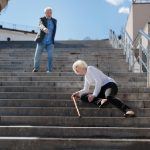 It is unfortunate that some of the most ordinary situations, such as a patient falling, lead to some of the most tragic accidents in nursing homes all across Ohio and several other states for that matter.

Whether it is on a bed in a resident’s room, on a chair in the dining room, or walking around the premises of the facility, many nursing home patients fall down.

When they do, it is normally not a minor accident. They are often hurt, disabled, and left with a big pile of bills. Here are some Ohio nursing home lawsuits that deal with fall incidents. We provide them below so that you will have a better idea of how this field of litigation emerges and unfolds:

This incident unraveled into a controversy quickly and severely. The affected nursing home resident was a female. She was in her middle seventies and was suffering from a number of medical problems prior to the accident. From what we can gather from the court records, she fell out of a wheelchair.

There were nursing home employees scheduled and assigned to watch her but they were momentarily absent from her presence. The damage was substantial. She broke a rib and sustained an injury to her head.

Due to her old age and pre-existing conditions, all of the effects were exaggerated. They required her to stay in the care of her physicians for an extended period of time and even enter a rehabilitation treatment center for a brief period.

When she was finally stable and back to regular health, she met with an attorney and brought a cause of action against the nursing home where the events occurred. Her main argument was that she would not have fallen down and injured herself had the defendant facility watched her properly.

The defendant replied to these allegations in brief denying them and denying it was negligent in any capacity. However, as investigations got underway, it became clearer and clearer that it committed certain mistakes-mistakes which directly led to the accident-and at that point it became more conciliatory.

Eventually, the two sides were able to settle the matter privately and the woman received $275,000.

As they were attempting to transfer her to a different room, one of the workers let her slip and fall down off of her bed. Whether the worker was employed by the home or the center was not determined but she was under the control of both companies.

Therefore, when the woman subsequently filed a lawsuit for damages that resulted from the incident, she named them both as defendants. The law allows plaintiffs to do this because multiple wrongdoers can be held responsible for all of the damages if they had a part in the negligent conduct.

The plaintiff can proceed against just one and collect the entire compensation. In this case, she chose to against both though and that can largely be explained because it doubled her chances of recovering. In fact, she didn’t need that much help as it turned out because both were willing to settle.

She received $150,000 in total recovery for her economic and other harms.

The plaintiff in this cause of action was not old by nursing home standards (she was sixty-one) but was limited in her mobility due to a prior accident. Therefore, she required the assistance of a walker, wheelchair, or other device in order to adequately walk about the premises.

On one such occasion, she was moving from her room to the other end of the nursing home when she slipped and fell. One of the edges of her walker caught a curb and the force was enough to send her flying to the ground.

Almost instantly she called out for help but none came for nearly an hour. Even then, they were not able to get her to an emergency room for almost an hour after that. The delay caused her great pain and suffering.

When she was examined by physicians at that location, they discovered that she had several broken bones and a neck strain. The latter injury continued to give her problems well after the day of the accident.

For that issue, for the costs of the event, and for everything else, she sued the nursing home for negligence in order to recover for the damages. She claimed that it should have had better supervisory controls in order to prevent handicapped residents such as her from falling.

She also claimed that her specific condition should have alerted the staff to heightened precautions but it did not take such actions. The nursing home claimed that the woman was contributorily negligence but that did not prevent her from succeeding in settlement.

Here are some exaggerating factors that she had going for her in this lawsuit:

This incident would have propelled into a much bigger fight and potentially much larger cause of action were it not for some fortuitous circumstances. The man who got hurt was walking through a hallway and accidentally tripped and fell down a flight of stairs.

Fortunately, it was a short flight and he braced his fall by holding onto the railing. Were it not for the latter fact, he might have been more critically harmed. However, he still did break a bone in his arm and that required surgery and care.

The cost of this was not minor and it was the main reason why he sued the nursing home. His complaint contended that it should have installed better protections to prevent these accidents and that he suffered as a result of that failure. It sought damages for his costs and pain.

The defendant nursing home offered that it had complied with the law and all of its responsibilities but that the accident occurred because of the plaintiff’s failures.

Consequently, it did not see how it could be liable for any losses that arose from his mistakes. Yet, comparing negotiating to the alternative of trial, it chose to settle and offered approximately triple the man’s expenses. The plaintiff accepted.

This accident went from bad to worse rapidly. The nursing home resident fell out of her bed while she lay asleep. However, she just didn’t suffer the blunt trauma from the fall itself because complications developed.

She hit her head and that started to hemorrhage. Once staff found her on the floor, they immediately transferred her to the emergency room. Doctors worked vigorously to restore her condition but were unable to succeed and she passed away later that night.

Lawyers brought a lawsuit on behalf of her estate and sought compensation for her wrongful death and the nursing home’s negligence. The plaintiffs received $500,000 for the following kinds of damages:

After taking some time and reading over these Ohio nursing home cases, it is critical that you come away with a good grasp of their major themes and takeaways such as these:

DID YOUR FAMILY MEMBER SUSTAIN AN INJURY DUE TO FALL IN AN OHIO NURSING HOME?

If you did, then we can help. Nursing Home Law News helps nursing home victims all across Ohio and the country. We stand up for your recovery when you have been mistreated in a facility like this because we care about your rights under the law.

From the very beginning, we can orchestrate a successful claim on your behalf and make sure that you don’t pay a dime unless you’re satisfied with the outcome of the jury award or settlement. We invest in your recovery so that you can focus on what’s most important-your health! To find out what you can achieve, give us a call today!