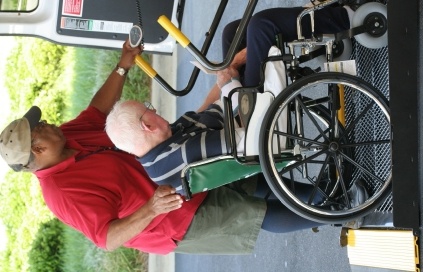 A recent auto accident involving a nursing home van– full of elderly patients– is under investigation by authorities in Iowa after two of the female passengers sustained injuries when the van rear-ended a car stopped at a light.

Apparently the women– who were both in wheelchairs– only had their wheelchairs attached to the floor of the van. The driver never used a seat belt to secure them within the wheelchair.

As the driver of the van applied the brakes the force of the stopping caused the women to be thrown from their wheelchairs causing them to sustain injuries.

In Iowa, as in some other states, there is no requirement that passengers in wheelchair be secured via seat-belt.  However, many handicapped drivers feel that common sense would dictate the use of some type of restraining device for the person in the wheelchair– as do I!

I think the key to safely transporting the physically disabled patient is to use any type of securing method available to make sure they are snug.  Too often I have worked on injury and death cases where the patient was secured to the vehicle only by the wheels of the chair– thereby allowing the straps to move though the spokes at the van moved.

Certainly, physically disabled passengers should be able to expect that the driver of the vehicle is experienced enough to properly secure them and assure them they they get to and from their destination safely.

In situations where a person does sustain an injury during transport on a van operated by a nursing home or other medical transport company, most situations are covered under the automobile insurance policy for the vehicle owner.  Generally, the injured person can recover for:

Transportation In & Out Of Nursing Homes: Ambulance Responsibility.