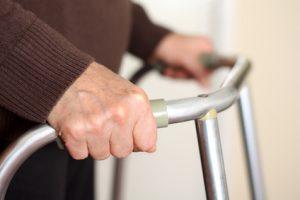 A single fall that a younger, healthier person might brush off could turn into a long-term hospital stay for elderly nursing home patients. If we consider that every 100+ bed nursing home reports between 100 to 200 falls (with many additional falls going unreported) and that between 50 and 75 percent of nursing home residents experience one fall every year, it is obvious that nursing homes need to do everything possible to avoid/reduce these dangerous, possibly even deadly accidents.

One example of unusual falls

When people talk about elderly patients falling, they often assume that these falls are because of environmental hazards or obstructions. However, these types of falls only account for 16 to 27 percent of nursing home falls.

Gene White of Des Moines, Washington is one of the many elderly Americans who took a bad fall. He entered into Seattle’s largest hospital – Swedish Medical Center – because he suffered from back pain. The original plan was for an overnight stay, but it turned into something much longer.

Because he was unable to sleep, White says at that around 4 AM in the morning, he received Ambien – a sleeping pill – from one of the nurses. Unfortunately, this is one of the sleeping pills associated with sleepwalking. In fact, hospital patients who take Ambien are four times more likely to suffer a fall as reported by the Mayo Clinic in Minnesota

When White came out of his dreamlike state, he found himself on the floor after hitting the washbasin. He broke three ribs on his left side. What turned into an overnight visit turned into two more weeks of hospital care and months of recovery in a nursing home facility.

What the hospital did to reduce the risks

The Swedish Medical Center is taking steps to prevent instances from happening again, they have made some drastic changes. Many beds in the hospital now use a bed alarm that goes off whenever a patient who is taking sleeping pills gets up during the night. All of the recently ordered beds come with this alarm. Despite the fact that this may prove annoying for residents, it does allow staff members to respond quickly – provided of course that a staff member is available.

Despite the fact that basic safeguards do work, it is important to understand that understaffing remains a serious issue in many different nursing homes. An alarm can never replace good care. It is becoming far more common to see large investment companies buy a number of nursing homes and then try to slash the budget as much as possible in order to increase their profits.

One of the side effects of this practice is understaffing. Nursing home staff members report that they work 12-hour shifts without taking so much as a single break. One of the reasons that breaks are mandatory is because when people forgo their breaks, it can drastically increase the odds of an accident happening. It is simply too difficult to remain focused for 12 hours straight, eventually a mistake is going to happen.

Fortunately, there are positive exceptions as well, such as the Auburn Medical Center – a hospital that had the unfortunate distinction of being the Washington State hospital with the most falls in recent years. After hiring more than 100 staff members and overhauling its safety procedures, the management says that falls are down 66 percent in less than a year. This just proves that with a combination of safeguards and qualified personnel, it IS possible to reduce falls.