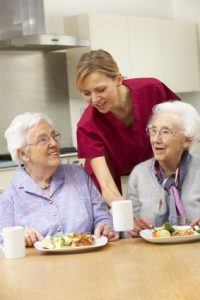 The Rookery home in Walcott found out that mealtimes could in fact be dangerous – and in this case even fatal. Paul Relton had a specific care plan that specified that he required one-to-one supervision when he was eating. His food also needed to be cut into minimal pieces in order to avoid choking.

However, on October 14, 2012, Mr. Relton finished his own meal and then took a cheese roll that belonged to another resident. He placed it in his mouth. A support worker at the home says that he took Mr. Relton out of the dining room and brought him into the lounge, this was done to ensure that Mr. Relton was unable to take any more food from other residents. Despite the fact that Mr. Relton did not appear to have anything in his mouth or appear to be in distress at the time, the support worker admits that he did not check whether Mr. Relton swallowed the cheese roll that he took a second ago.

Minutes later Mr. Relton ran out of the room and began coughing in the corridor. The support worker first assumed that this was normal coughing, but as it continued on, he decided to check on the resident. He report that he saw Mr. Relton lean up against the wall.

After seeing Mr. Relton up against the wall, the support worker brought another patient that he was with at the time back to the lounge. By the time he came back, Paul Relton face was face first on the floor in another part of the building. After calling the emergency number, it took paramedics 24 minutes to arrive at the scene – 14 minutes longer than their target. Two days later, Mr. Relton died in the hospital.

The aftermath of this case

The support worker says that he felt that having more staff present in the dining room at the time may have prevented the grabbing of the cheese roll in the first place. However, the manager of the care facility said that the staff levels met the ‘regulatory requirements’. The death was later ruled ‘accidental’.

Why this could happen more often

Part of the problem that plagues a number of care facilities and nursing homes is the fact that there are not enough adequately trained staff members present at all times. This means that during hectic times such as breakfast, lunch, or dinner, staff members are busy trying to help as many residents as possible.

It is important to have more staff members during these stressful times to ensure that an incident such as the one with Paul Relton does not happen again. Despite that, there are an increasing number of nursing homes that are cutting down on personnel in order to save money.

Remember that even small incidents could have big consequences. If you notice that the staff is no longer able to provide support for your loved one, it is important that you speak out and make your voice heard.