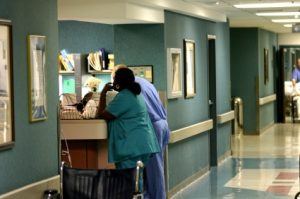 Anyone who reads the horror stories that are sprinkled through out the country about care provided to patients in nursing homes has to ask himself or herself “What is wrong with these people?” How can any human being treat an aging or disabled person with so little compassion? Unfortunately, as these horrendous acts keep occurring in nursing homes, it is obvious that there are many facilities that have both administrations and staff that just do not have empathy for their residents.

Recently at a nursing home in Iowa, a 64-year old woman was allowed to die while her two daughters could only watch. Barbara Logsdon was a resident at the Golden Age Nursing and Rehabilitation Center in Centerville. Two of her daughters worked at the facility, which should have made her feel safe as well as put their minds at ease that they could keep an eye on her care. Unfortunately, in the end, there was nothing they could do except watch while their mother died. Barbara was supposed to have her airway cleared for mucus blockages regularly according to the medical records. When her daughter arrived at the facility on June 22nd, she found her mother in distress and alerted a nurse. The nurse dismissed the situation as she said she had other people to attend to. The second daughter then arrived and eventually they got a nurse to come and start clearing Barbara’s airway, but by then, it was too late. The nursing home was fined $8,000 for this basic omission. Stories like Barbara’s should be few and far apart but that just is not the case in the nursing home industry. There seems to be many facilities and staff members that have little compassion for their charges. Somewhere along the line, the human connection has been lost and these poor patients are treated with disregard and in some cases, even disdain.

How To Fix The Problem

There are no training programs or seminars that can teach compassion. While nursing home staff can be trained on all the correct procedures for medical and health reasons, there is no way to instill a sense of morality into these people. So how can the problem be fixed? The only way this can be turned around is for the administrations of these facilities to start caring about the type of care they are proving, thus caring about the caliber of employee they hire. Unfortunately, this is an industry that is mostly for-profit businesses that are only interested in their bottom line, not in hiring staff that is well trained and compassionate.