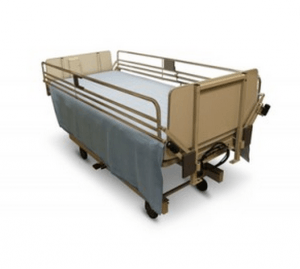 Amongst a myriad of issues faced by patients in nursing homes, one that requires immediate and serious concern is the entrapment of patients in the bed rails. Bed rail entrapment refers to patients being trapped in the rails of their bed, which causes obstruction in their movement and makes them unable to get out of their bed. Being stuck in the bed rails for hours leads to suffocation and immobility, which eventually results in the death of the patient. This is a commonly experienced problem in most nursing homes and is making people unsure of their decision to send their loved ones to nursing homes.

Several cases of patients being severely locked in the bed rails in nursing homes have been reported in the past. These include that of a patient who had his head and torso trapped in the head side rail and foot and head rails respectively and his lower body hanging down towards the floor. This patient died a little while after experiencing this accident. Another case is of an eighty-year-old woman whose head was caught between the mattress of her bed and the head side rail, her arm was locked in the rail on the foot side; she too passed away due to this shocking episode. In one other case, an old man was entrapped between the bars of the side rail of his bed and received serious injuries on his head.

These are only three of the hundreds of bed rail entrapment accidents that take place in nursing homes and have put the reputation of these nursing homes in severe jeopardy.

The Food and Drug Administration (FDA) received around 102 reports of patients being trapped in the bed rails since 1990. The patients were reported dead in 68 of these cases and around 22 suffered from grave injuries. Reports of similar cases have been also received by the Department of Health in United Kingdom, the Canadian Health Protection Branch and the U.S. Consumer Product Safety Commission.

From 1980 to 2008, Health Canada received around 67 reports of bed entrapment cases in nursing homes; of these 67 cases, the patients were reported dead in 36 incidents. In all of the cases, the patients were entrapped in either the bars of the split side rails, the separate side rails, were locked between the mattress and the rail on the side, and were stuck between the foot board, the side rail or the head rail.

These accidents throw light on the negligence that prevails in the health care facilities and shows the authorities’ lack of concern for their patients. Moreover, it also reveals that the patients were not given any training to use their bed rails and to get out of their beds with ease.

Reasons for These Tragic Episodes

There are a number of reasons that lead to such terrible accidents. One of the most prominent reasons if that the staff and nurses of the health care facilities are often under trained and are not properly guided regarding taking care of the patients. Secondly, the nurses have been reported to be extremely negligent towards patients and do not attend to their needs on time.

The nurses leave the elderly patients with chronic disorders alone for long periods of time, which is why patients have to get out of the bed themselves. Moreover, patients are not instructed on using the bed rails and they end up being trapped inside the rails. Lastly, the reason that needs a lot of attention is the fact that beds are in poor condition and have rails that are rusted and cannot be moved easily.