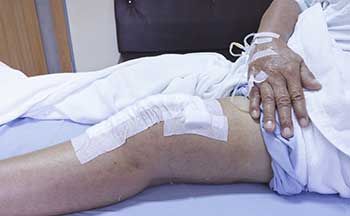 Pressure sores, once started, can be difficult to treat and heal, even by the best medical staff. Though prevention is still the best medicine in the case of these painful and deadly sores, there is a treatment that uses a machine called the wound VAC that seems to accelerate the healing while also protecting the wound from infection.

What Is A Wound VAC?

This specialized piece of equipment is brilliant in its simplicity. VAC stands for vacuum-assisted closure. The idea is to use foam and a negative pressure vacuum to reduce fluids and seal a wound as it heals. How it works is the wound is first dressed and then a piece of sterilized foam is cut to the size of the wound and placed on the wound. The wound is then covered and attached to a pump that suctions fluids out, leaving a level of moisture that allows the wound to heal while slowly pulling the wound together to close. The machine collects excess fluid and it is disposed of. For further discussion of a wound vac look here.

For use in the treatment of pressure sores, there have been many studies that have shown the effectiveness of using VAC equipment to excel and help with the healing of these sores. Part of what makes this machine work well for pressure sores is its ability not only to close the wound but also to protect it from additional bacteria exposure that is often associated with progressed final stage sores (look here). The Agency for Healthcare Research and Quality has several studies that are listed on its website www.ahrq.gov that have shown that this treatment seems to promote faster healing along with protecting the wound from further infection.

There has been a huge battle over whether the claimed inventor of the wound VAC and the company who first started supplying it in the U.S., Kinetic Concepts Inc.(KCI), have exclusive rights to the method. The inventor, Dr. Louis Argenta, says he originally came up with the idea back in the 1980’s. He brought the idea to Wake Forest University, who applied for the patent for the VAC and sold the license to KCI. By 1995 the machine and technology hit the market and over the next decade, profits soared into the hundreds of millions.

The controversy ensued when Medicare began reimbursement for the use of VAC treatment and other medical supply companies wanted in on the action. Other devices were created using gauze instead of foam, but physicians still preferred the foam device as it was proven effective. The next step was proving that the original foam patent was based on prior technology. Since negative pressure had been used for a century in wound healing the technology was considered “obvious”, making the patent KCI had invalid. Since then, many companies have created their own versions of the VAC and created a more competitive price environment for the device.

Regardless of its legal history, the VAC wound healing equipment and technology have brought improved healing to pressure sores and other wounds. They are one of the best advancements that have been made in the treatment of advanced pressure sores, regardless of the company that makes them.