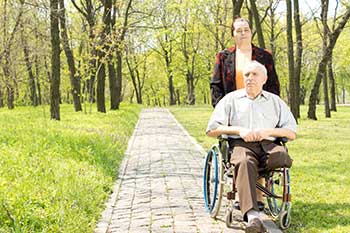 A nursing home negligence lawsuit was recently filed in Chicago‘s Cook County Circuit Court on behalf of a disabled man who suffered the amputation of his leg following the development of bed sores during his admission to a Joliet, IL nursing home. The lawsuit alleges that Hillcrest Nursing & Rehabilitation Center was negligent in the manner it cared for the man who entered the facility in 2010 for rehabilitation following a series of strokes.

A decline in condition

According to the man’s family, despite his illness, he was able to get around with the assistance of a walker when he entered the facility in 2010. However, during his admission staff at Hillcrest failed to provide the necessary care that he required allowing the patient to become less mobile and eventually develop a bed sore on his heel. Even after the bed sore began to manifest itself, staff at the facility failed to provide the necessary treatment which resulted in an infection that ultimately required the leg to be amputated above the knee.

A meaningful loss in the quality of life

Without the use of the leg, this man will likely require additional care for the remainder of his life from some type of skilled nursing facility. According to the man’s sister and power of attorney,

John was paralyzed to the right side of his body. When he had to have an amputation, it was his left leg– his only means of mobility and independence. Now he cannot get out of bed by himself and it is very difficult to transport him. Not being able to transport him keeps him essentially trapped in a facility instead of being able to participate in everyday activities like seeing family , going to dinner or a movie.

Problems at a troubled facility

As a nursing home abuse attorney, I candidly tell clients that poor care can manage to find its way into even the most respected facilities when errors are made by staff. While the errors (hopefully) are identified and corrected at properly operated facilities, at many poorly run facilities the problems generally persist. Here at Hillcrest, there seems to be an epidemic of problems that directly impact patient care. During a five month period in 2011, Illinois officials cited the facility for 23 incidents involving:

In a rare and bold step, officials where so disturbed by the inferior care provided to patients at the facility that the state pulled its operating license– essentially forcing the facility to shut its doors.

As an attorney who regularly sees patients and families when care goes wrong, I’m always disturbed by the fact that many facilities with truly troublesome track records of patient care are allowed to remain open– providing the same inferior care to patient after patient– essentially creating a cycle of troubling problems. In a situation like the lawsuit we discussed above, families deserve to expect that the facility that they are placing their loved one is meets a basic standard for care. Simply giving some of the more inferior facilities an opportunity to improve care allows episodes of patients to suffer continuously.