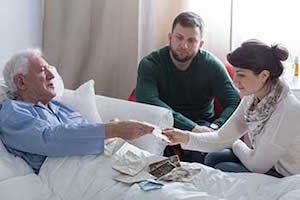 If you ask most people what a ‘bed sore’ is, you may get a lot of blank stares and shrugs. Truth is, most people probably have never seen a severe bed sore. However, when people actually see the gruesome photos of rotting flesh on a person’s backside that expose underlying layer of skin and bone they probably will next forget the image.

Similarly when people hear of the ongoing medical procedures that are necessary to heal the wound, and the pain experienced by the individual, they really begin to understand the real impact of this medical condition. The reality is that bed sores kill patients in nursing homes and hospital– needlessly.

The visual impact and physical devastation to the man that was caused by the bed sores is likely what caused a New York jury to make their substantial award in a lawsuit filed by the family of a deceased man who developed bed sores in a nursing home.

The man’s daughter’s Margaret Whitehurst, said her father’s medical condition quickly declined during his nine month admission to Brooklyn, NY facility. “He walked in on two legs and a cane. He was 237 pounds. When we got him back, he was 148 pounds and had holes all over his body.”

During the trial, the jury heard testimony from the man’s family and physicians regarding the severity of his bed sores (also called: decubitus ulcers, pressure ulcers or pressure sores), and also from a handwriting expert who testified about how the man’s nursing chart was altered. According to the handwriting expert’s testimony, the admission paperwork was altered to look as though the man entered the facility with bed sores, although his family and physicians strictly denied that fact.