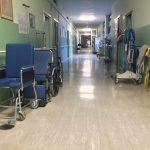 As more people decide that they need to enter a nursing home, facilities are pushed to capacity and exhaustion (of both personnel and resources). While it shouldn’t be the case in the best circumstances, it normally is the case in reality that we see a falloff in care.

Medications get missed. Treatments are forgotten. Residents are neglected.

However, the added pressure homes have is no excuse for inadequately caring for nursing residents because it’s exactly why they were admitted in the first place.

In the next few pages, we summarize some New Mexico nursing home verdicts and settlements involving medication errors. See if they might resemble your situation.

This nursing home lawsuit was brought on behalf of a seventy-eight year old woman who died in a New Mexico nursing home. Her lawyers argued that the home’s negligence caused her death. Specifically, the lawsuit alleged that facility staff was aware that the woman was suffering from internal bleeding but didn’t take action.

Then, when she did die, they erroneously gave her a shot to supposedly help her then falsified information to make it look like she had passed away under different circumstances. To add insult to injury, the suit stated that the staff also lied to the woman’s family about the incident and left her bloody clothing and sheets out in the open for several hours after the death.

The defendant nursing home denied that it was at fault and contended that she would have passed away anyways. However, it couldn’t point to anything to excuse its failures in the last few days of her life.

Here are some things to note about this figure:

The size of this nursing home verdict was shocking especially considering the man died from unrelated caused before he even got it.

How did he obtain it?

Well, he was admitted to a nursing home following treatment related to a hip replacement procedure.

Things only got worse from there. Instead of getting better, his condition deteriorated significantly: he developed bed sores, they became infected, and he suffered from extraordinary malnutrition.

What made the chain of events so striking was that he was only fifty-five and in relatively good health prior to staying at the facility. After this course of events, he was completely immobile, had serious stage four bed sores, and was experiencing mental grief.

He sued the nursing home for negligence and maintained that its deficient care led to all of his health problems. He sought compensation for costs including medical bills, physical suffering, mental suffering, disability, and disfigurement.

However, the defendant clung to the idea that it did nothing wrong and served the resident with the level of care that he deserved. The jury disagreed.

This case involved a rather unfortunate incident. The victim was an eighty-one-year-old woman who had dementia and a number of other debilitating conditions. She required supervision at all hours of the day. Unfortunately, on one occasion, that was not what she received.

On an early morning, nursing home staff found her lying on the floor of her room. It turns out that she had been there by herself for several hours. In fact, she broke her leg in the fall and couldn’t get up. Things got worse though when they realized that she hadn’t received her medicine for over two years prior to the incident.

She had to be taken to the hospital for treatment and stayed there for several weeks in recovery. Once she was better, she filed a lawsuit against the nursing home for negligence.

Her argument alleged that the facility’s negligent care and supervision led to her injuries and eventual disability.

Not long after the suit was brought to court, both sides settled for $500,000 and here are some things that explain that figure:

This was an inadequate care lawsuit that rested primarily on neglect. What happened was the plaintiff was an elderly gentleman and veteran that had strict dietary and prescription needs.

He was suffering from chronic heart issues, diabetes, and other problems. Over the course of several months, he claimed that he did not regularly receive medication, adequate food or water, and other critical items and attention.

In his opinion, the result of all this neglect and inadequate service was a worsening of his already poor health as well as a lost chance at survival (the man died from unrelated reasons not long after the lawsuit was filed).

His complaint sought damages for costs, expenses, pain, suffering, lost chance, and wrongful death. The defendant plainly objected to all of these claims and replied that it gave him everything he need to live a healthy life but his pre-existing conditions didn’t all it.

However, preferring the certainty of settlement over the mystery of a jury trial, it still offered to settle and the estate accepted for $150,000.

Here are some key points about this settlement:

This case was more of a complication than one specific event. Over the course of several months, an eighty-two-year-old female nursing home resident didn’t receive significant water or hygiene treatment.

As a result, she suffered from severe dehydration which combined infections that developed due to lack of cleaning to nearly take her life. When the nursing home staff realized the problem, they immediately sent her to the hospital for care.

However, she had to stay there for several and was never the same again because of its effects. She sued the nursing facility for negligence and claimed damages for medical bills, pain, and long-term suffering as well as lower life quality.

The defendant home objected to the idea that it was at fault and countered that any ill effects she experienced were a result of her own condition and had nothing to do with them.

Yet, not long after this reply was filed, it still sought to settle and she got $300,000 most likely for these reasons:

This case might seem indifferent or commonplace but it’s indicative of common problems and accidents in New Mexico nursing homes so it’s worth reviewing. The victim was a resident in his early nineties. At the time of the accident, he was struggling with Alzheimer’s disease as well as other serious health issues.

On the day of the incident, he was walking around the facility by himself and found his way to actually exit the premises. When he tried getting back in, the door was locked and he banged on it to be let in but couldn’t get entry.

Then, he fell down. By the time that staff members finally found him, he had broken several bones and needed to be taken to the doctors. There the physicians treated him and put him in recovery. After a few months, he decided to sue the nursing home.

His lawsuit claimed that the facility negligently supervised him and that the inadequate care led to his injuries. It sought damages for his pain, costs, and suffering.

The defendant didn’t let the dispute progress very far before offering to settle for $100,000.

Of all the things that nursing homes are supposed to give their residents, the most fundamental is a basic level of care and service. Yet, as seen from the above cases, that is not always what they get.

Keep in mind these takeaways if you were hurt because of a home’s inadequate care, such as a medical error:

Were You Injured due to a New Mexico Nursing Home’s Negligence?

Attorneys at Nursing Home Law News work with nursing home negligence victims to see if their facility’s conduct was to blame for their injuries. If it was, then we help them get all of the compensation they deserve under the law in New Mexico.

Plus, we won’t charge if you’re not happy with what we get you. Don’t wait though because you might miss your chance to recover. Call our offices today!