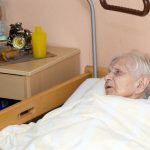 Though ubiquitous throughout New Mexico nursing homes, falls are still a serious problem that often needs to be addressed in a court of law or private negotiation room. They’re so common because residents can fall from virtually any spot in the facility: bed, chair, toilet, and many other spots.

As frequent as falls are, they are just as expensive. Residents commonly rack up thousands in doctors’ bills, prescription costs, and rehabilitation treatments.

Therefore, it’s important to know more about this problem and here are some New Mexico verdicts and settlements that address falls in facilities.

This story centered on an elderly female who had been living at the nursing home in question for several years before the incident took place. On one occasion, a worker attempted to help her move out of her bed but she fell down and fractured her arm and her hip.

She was immediately taken to the hospital to receive treatment but it couldn’t prevent her from passing away just a few weeks later. After consulting some attorneys, the representatives of her estate decided to sue the facility for damages related to the event.

The complaint contended that their actions contributed to her death and caused her enormous pain, suffering, and expenses prior to passing as well as to the estate. It is important to note that the plaintiffs weren’t putting all of the blame for her death on the defendant because she was already ill before the accident.

They merely claimed that the defendant contributed to it. The nursing home argued that the employee was a contractor and thus it couldn’t be held responsible for her injuries. However, the jury disagreed. It placed blame on both the worker and the nursing home.

The estate received $166,000 in damages and here’s how the nursing home award broke down:

The nursing home victim in this New Mexico lawsuit was seventy-four years old. At the time of the incident which led to her death, she was severely ill and experiencing effects related to dementia and other problems.

The event that triggered this downward spiral was when she fell from a wheelchair that was being driven by a facility employee. While many nursing home falls are not that serious, this one definitely was. She smacked her head right on the ground and sustained a hemorrhage in her brain that took her life.

Lawyers for the woman’s family sued the nursing home for wrongful death and negligence. Their lawsuit maintained that the facility didn’t appropriately prevent her from falling over, identify her injuries, or provide her with proper care.

They sought recovery for the harm this caused her, expenses they caused the family, and other related damages. The defendant nursing home denied all responsibility but still offered a settlement.

Here are a few facts that can help justify this figure:

This nursing home lawsuit might seem like a one-off dispute to the untrained eye but it has ramifications well beyond these simple circumstances. What happened was that one of the residents, a woman in her seventies, rolled out of bed while she was sleeping and injured herself. She broke a rib and her left elbow.

Due to these injuries, she had to stay in a nearby hospital for several days and enter into rehabilitative care for several months. All told, the one-time accident ended up costing her tens of thousands of dollars.

Should she have to pay for this all by herself? No, not according to her lawyers or the lawsuit that she filed in state court approximately one year after it happened.

She alleged that the nursing facility was negligent in its care of her, services offered, and overall supervisory structures. It pled for damages for the pain she endured, expenses she paid, and disability she received.

The defendant argued to the contrary. It replied that the woman was contributorily negligent and that as such she was not entitled to anything.

How did that happen?

Here a few things that justify this outcome:

The resident in this story broke out of the nursing home and wandered nearly two miles away before falling down and injuring himself. He broke his knee and a finger in his hand. Also, he had to wait nearly two hours until someone finally found him, brought him to a hospital, and put him in front of a doctor.

After he was all better, he chose to file a lawsuit in New Mexico court against the nursing home that was supposed to be watching over him. His case was that it failed to supervise him and this negligence contributed to his injuries.

The defendant facility shot right back and said that the man was responsible for his own harms. Also, his pre-existing conditions (Alzheimer’s in particular) made blaming the home for this accident legally unrecognizable. It moved to dismiss the case.

However, before that motion was argued in court, both parties agreed to settle for $50,000.

These points might show you why that amount was appropriate:

This incident involved a series of mistakes which ultimately led to a fall at a New Mexico nursing home. The seventy-nine-year-old woman ended up passing away just a few days after she was finally taken to the hospital.

Her family wondered what led to this terrible conclusion so they enlisted the help of a personal injury firm. After a decent amount of investigation, they uncovered some mistakes that the nursing home committed so they decided to file a cause of action against the facility for damages.

The lawsuit cited the defendant home with negligence and responsibility for the wrongful death of the woman. The lady was survived by several children and grandchildren. In particular, they alleged that the nursing home didn’t install proper devices so that the deceased woman could call for help, didn’t check on her for over seven hours, and didn’t care for her to the level that she deserved.

Consequently, she fell and broke several bones in her body which started a downward spiral concluding in death. When the defendant had its turn to reply to all of these charges, it said that it cared for her properly and complied with all laws and regulations.

This dispute arose when the New Mexico nursing home resident was in transit from the facility to a hospital. She was sixty-four and supposed to go get treatments related to her diabetes and other persistent health problems.

It didn’t start off as an emergency but it quickly escalated to that status when the nursing home staff inadvertently pushed her over her wheelchair. She fell face first and injured bones in her head and hand. She needed to receive immediate care as well as long-term rehabilitative services.

She sued the nursing home as well as the company that was assisting in the transportation. Her lawsuit complained of negligence and alleged bodily injuries, financial losses, and other damages that they were both responsible for.

The defendant transportation company was quickly dismissed as a defendant when it was determined that its employees were not at the scene of the accident so that left only the nursing home. It didn’t want to try the case so it offered to settle and she accepted for a sum of $350,000.

This amount can be explained for a couple of reasons including the following:

After you look over these New Mexico lawsuits, keep in mind these takeaways so that you come away with the correct sense of the dynamics involved in the cases:

Did Your Loved One Fall in a New Mexico Nursing Home?

If your family member fell and harmed himself while living at a New Mexico nursing home, then we need to speak to you. The attorneys at Nursing Home Law News can bring a claim on your behalf and make sure that you get all of the recovery allowed under the law at no upfront cost to you.

To start the process, call our offices today and speak to one of our experienced nursing home lawyers. We will listen to your story and help you understand how the laws of your state afford you relief.