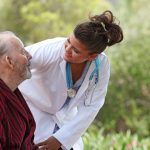 Abuse is one of the most serious categories of incident types in nursing home lawsuits. It is common too because the field is so broad: physical, mental, emotional, sexual, and even financial.

It encompasses so many things but they all violate the same principle: the feeling of safety and security that each and every resident deserves. To show you the nature of the problem affecting nursing home patients, we have summarized some nursing home verdicts and nursing home settlements below.

They deal with abuse. If you have been abused in a Michigan nursing home, then give the nursing home abuse lawyers from our offices a call. We can make sure you get help and safety.

The plaintiff in this Michigan nursing home dispute was an elderly gentleman. He had limited range and mobility but could walk around the premises without the assistance of a wheelchair. On one day, another resident of the facility attacked him while he was moving about the grounds.

The reason for the assault was unknown but the consequences were quite obvious. He sustained facial lacerations, broken bones, and other bodily injuries.

The defendant facility denied that it was negligent or that it could be held responsible for the intentional torts of a third-party resident.

However, preferring the known to the unknown, it sought the confines of a predictable settlement over the risks of an unpredictable jury.

The plaintiff ended up getting $150,000 from the institution and that money went toward the following items:

This case was unique because it involved a husband and wife who both lived at the same nursing home where the events took place. The lawsuit was brought by the husband but it involved an incident that occurred to the woman.

He claimed that facility staff strapped her down and physically and sexually abused her. He stated that she suffered various injuries from the traumatic event including skin lacerations, vagina tear, and severe emotional distress. In fact, the husband claimed that she even died because of what happened.

The lawsuit said that the rape and attack was more than she could take and forced her to have a heart attack and pass away. The cause of action targeted the nursing home as well as the employees. It sought recovery on multiple theories including negligence, wrongful death, and even breach of contract.

This may have explained why the only issue remaining once the matter got to court was breach of contract.

On that point, the jury found for the plaintiff and awarded him $240,000. Here are some facts that highlight this nursing home verdict:

The resident in the middle of this nursing home storm was just sixteen years old. He was living there because he had disabilities since birth including hearing loss. On more than one occasion, he claimed that nursing home employees and other third-parties abused him and physically constrained him.

One particular occasion was rather disturbing. He alleged in his Michigan nursing home lawsuit that a facility staff member took him and threw him against a refrigerator.

He was severely injured because of it and even suffered a complete loss of hearing in one of his ears. After consulting with his parents and lawyers following the event, he decided to bring a lawsuit against the nursing home.

He alleged that it was responsible for its employees because it deficiently screened, trained, and supervised them. The defendant disagreed. It alleged that things done outside the scope of employment-such as an intentional tort like battery-could not be impugned to the employer.

However, it still offered to settle. The plaintiff rejected this amount and took the matter to court where the jury awarded him $200,000.

This Michigan nursing home verdict is surprising because of the following:

What facts we can gather from this Michigan nursing home incident make it clear that the resident was clearly abused. However, just how much and by who are rather hard to determine especially because the case short-circuited into a private settlement.

Here’s what we know: the victim was a woman in her early eighties. She was attempting to use the community restroom just outside of the dining room when another resident came in and attacked her.

A nursing home employee also entered right after he did and might have harmed her as well. Unfortunately, the aggressor was suffering from dementia and other mental problems so getting his side of the story proved to be quite difficult.

The woman sued both of them as well as the nursing home itself. She alleged that the two individuals committed intentional torts against her including assault and battery. She also claimed that the nursing home committed negligence through its faulty supervision, hiring, and service. Her complaint sought damages for her bodily injuries, emotional trauma, and medical bills.

Once the matter got to trial though, only the claim against the nursing home survived because she ended her pursuit against the employee and resident. About one month after the trial commenced, they too settled and moved on from the affair.

She received $300,000 from the facility which was apportioned according to the following breakdown:

This was a different kind of nursing home abuse case than you might ordinarily see in Michigan or anywhere else for that matter. It was different in the form of abuse that the resident suffered and sued for.

What happened was that over the course of several months a third-party employee persuaded an elderly woman living at a care facility to deposit large sums of money into an account owned and managed by the worker.

Then, the employee left the employment of the nursing home leaving the resident to hold the bag and without the money. Interestingly, when she eventually filed her lawsuit in Michigan court, she sued not only that person but also the nursing home.

She argued that the facility was liable because of its deficient screening and supervision of its own workers. She asked for damages for the money she lost and trauma she endured.

This kind of financial exploitation is increasingly common in nursing homes and so is her success in court.

She recovered $75,000 in settlement from the defendant home which correlates to the following points:

If you’re involved in an abuse incident at a Michigan nursing home, then there are a couple of things that you need to focus on in order to protect your legal rights. Remember these takeaways:

Was Your Loved One Abused at a Michigan Nursing Home?

Lawyers at Nursing Home Law News work with residents that have been abused at the hands of nursing homes. We spend our working days making they sure they get the justice they deserve and you get the recovery that you need.

If you call us a call, we can schedule an initial meeting to screen your case and review what recovery might be awaiting you. It’s worth it. You deserve it and we can help.