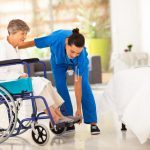 Almost more than any other setting, abuse in nursing homes offends society’s sense of order and decency. Residents are often old, sick, or otherwise vulnerable. They come to the shelter of these institutions to receive the care and protection that they need and deserve.

Unfortunately, many are abused physically, mentally, or in a totally different manner. To help you understand this issue and the threat that nursing home residents face everyday, we have summarized some Maryland nursing home lawsuits involving abuse below for your review.

However, you should contact a  nursing home abuse attorney from our offices if you or a loved one has been the victim of such an incident.

This case mirrored more of a neglect incident but the overall effect on the resident was abuse so it’s included within this section. It’s abuse because nursing homes owe residents a certain level of care and service due to their vulnerable status.

When they don’t receive that, they are abused. Here, the victim was in her early eighties. She had a variety of medical conditions so she required constant medical care and a series of prescriptions. However, it appears that her staff messed that up because she ended up in the hospital with complications related to dehydration, malnutrition, and other issues.

Also, she clearly did not receive her scheduled pills and treatments. The effects were not minor. Her heart and immune system were in bad shape and getting worse daily. She needed to stay in the hospital for several weeks before her condition returned to normal and even then she needed to be carefully monitored.

When doctors finally discharged her, she went to live in a different nursing home because she did not trust the staff at the original facility. Also, she brought a lawsuit against that home for the ill effects and costs that arose because of these events.

She alleged that its negligence caused them and specifically that it did not properly employ, train, or supervise its employees to prevent these injuries. The defendant denied these allegations in its reply.

However, faced with the prospect of drawn-out litigation, it entertained the notion of settlement and the woman received $200,000 which did account for the fact that she was very ill before these events occurred.

Angry words fomented into a significant altercation in this matter. Two male nursing home residents were in one of their rooms watching television when they got into an argument at some point. The issue that sparked the disagreement was unknown but the consequence was clear: fists were thrown and bones were broken.

The smaller of the two men badly injured his hip and fractured his arm. The larger man was fine except for a few scrapes and scars. Both were taken to a hospital and examined for more serious injuries which there were none thankfully.

However, that didn’t excuse them from the sizeable medical bills that attended the visit and care or the pain that resulted from the fight. The man that was more critically wounded from the affair decided to bring a lawsuit against the other as well as the nursing home itself.

The claims against the resident were obvious but the ones he made against the nursing home were a bit more complicated. He alleged that the defendant facility owed residents a duty of care that extended to the point of ensuring a safe environment free from the assaults and abuse he suffered.

The nursing home denied that it could protect others from the intentional attacks of co-residents. Yet, it didn’t want to litigate the point in court and once that prospect became likely it adopted a more negotiating tone.

The plaintiff received $150,000 from the facility and more from the attacker in a different settlement.

The victim in this cause of action was a woman. She was eighty-two and had been a resident of the nursing home where these events took place for a number of years. Apparently, at some point right before they occurred, the staff which was primarily responsible for her day-to-day care changed and new employees were put in charge of her.

One of them attacked her on two occasions. The second assault was at night while she lie in her bed asleep unaware of what was about to happen. Obviously, the events left her traumatized and injured. Her sense of safety and dignity were stripped from her.

She could not imagine how to go forward until she and her family in consultation with their lawyers decided to bring a lawsuit. They sued the man for assault and battery. They sued the nursing home for negligent care.

The defendant institution pled the affirmative defense that the man’s intentional acts exculpated any liability that it might have. Yet, the plaintiff was very good at showing how other cases and laws still put nursing homes on the hook whey they improperly screened or supervised employees. In this case, the aggressor did have a record of similar misconduct.

Once these points were established, the defendant nursing home was convinced to settle and the woman received $500,000 which was to compensate her for the following damages:

The plaintiff in this legal matter was a female resident in her seventies. She was enjoying a quiet walk on the grounds of the premises one early morning. Unfortunately, things did not go as planned. A man happened to be walking over the grounds and struck her intentionally.

He did not live there; he was not visiting anyone; and he did not have permission to be at the nursing home. How he got there could not be answered by anyone that had responsibility for the home’s safety. The woman suffered a concussion and had to spend considerable time in a hospital to recover from the attack.

Once she was out of rehab, she filed a lawsuit against the home (she also filed one against the man who attacked her). Her complaint listed negligence as the cause of action and sought compensation for her economic and non-economic damages.

The defendant filed a reply and denied or demurred on each of the woman’s contentions. It wanted to see if her case would get any traction and as the matter opened up in court it appeared that it did. Not surprisingly, they settled shortly thereafter for the amount listed above.

This matter had a very complicated beginning. The resident was sixty-eight and had diabetes, heart disease, and several other serious health issues. Part of the reason that she sought out this particular nursing home was that it promised to her and warranted in contract that it could take care of her despite these health concerns.

Yet, it seems that they did not have sufficient personnel or capabilities to handle the situation. It was only six months into her stay there that her situation deteriorated substantially. In fact, it got so bad that her breathing stopped a few times and she needed to be taken to the emergency room. Doctors worked immediately to stabilize her condition but she still needed to undergo substantial rehabilitation.

This meant that she needed to stay in the rehab unit of the hospital for several months. Naturally, the woman believed that the nursing home promised more than it could deliver and sought to right that wrong in court.

Her lawsuit alleged negligence and as for damages pointed to her exorbitant medical bills, pain, and long-term health implications. The defendant nursing home was in no position to argue and eagerly and early sought to settle.

The woman received $400,000 which covered each of the following claims:

After reading the nursing home summaries we offered in the previous section, scan these takeaways to review the major themes of this field of law:

Was Your Family Member Abused in a Maryland Nursing Home?

Attorneys at Nursing Home Law News can help you stand up in court against the people and companies who abused your family while they were in a Maryland nursing home. Nursing homes, hospitals, and medical professionals have significant resources at their disposals but we have the tools and strength to match them and make sure you get what you deserve under the laws of Maryland.

To find out what you can obtain, call us today. We look forward to hearing from you!