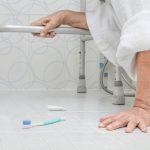 Residents in Louisiana nursing homes are subjected to all sorts of mishaps and misconduct. However, one of the most common sources of injury (and all of the bills that come with that injury) is falls.

It might be hard to believe but patient falls in nursing homes is one of the most serious risks in these facilities. They can lead to broken bones, concussions, and even death in certain circumstances.

They are so common because they can arise anywhere. They are so serious because the Louisiana residents themselves are already so old, sick, or otherwise vulnerable.

We have summarized some Louisiana nursing home lawsuits below that spotlight falls in care facilities. They should offer a great introduction to this area of law and offer a glimpse as to how these cases are valued in a civil law context.

The resident in this case was previously injured in an accident. The nature of that event was not quite clear but the effects were apparent and obvious. He had a disability which prevented him from being able to freely and easily walk around the nursing home.

The injured area was in his left leg and hip. These circumstances required him to use a cane, walker, or wheelchair. On one early morning, he was walking around the perimeter of the nursing home when he slipped and fell.

The area where the accident occurred was very wet. It had rained the night before and apparently the nursing home staff and did not mop up the entire walking path. Well, the consequences were substantial.

He reinjured his leg and hip, both of which required surgeries to correct as well as serious rehabilitation to fix on a long-term basis. Nearly a year after the incident, he brought suit against the nursing home where he fell.

After he was released from the hospital following the event, he was admitted to a different facility so the circumstances of the litigation were not as adversarial as you might think.

Nevertheless, the defendant nursing home still pressed back and quite effectively. They claimed that the man’s damages were exaggerated or at least the result of his prior accidents. Also, the defendant maintained that the man was negligent himself and assumed the risk of injury when he went out for a walk without seeking assistance.

In response, the plaintiff showed that the nursing home had a poor history of protecting residents from falls and that the he specifically asked for special assistance upon his admittance. When this was demonstrated, the nursing home became more amenable to resolving the suit abruptly.

The man recovered $200,000 which was a bit lower than you might presume given the following:

A woman filed an action in Louisiana after she fell out of bed and suffered a concussion. She faulted the defendant nursing home for not installing bed rails, staffing and training employees sufficiently, or providing for her overall health and wellness.

The facility could not defend its actions and this was a stark example of quasi-strict liability when residents fall in nursing homes. This point was evidenced by the fact that the defendant moved quickly to end the matter and move on from on from the legal affair.

The resident received $125,000 in settlement which was approximately four times her medical and other expenses. Generally, when plaintiffs suffer significant intangible or brain injuries, they can expect to recover at least two or three times their economic damages (for things like medical bills, lost income, and similar things).

Therefore, this settlement amount was a successful award for the woman and representative of the high bar of liability that homes must meet when caring for residents. When residents fall down and injure themselves, they are almost always seen as falling below that threshold of service and on the hook for much of the damages that come about as a result.

This fall accident happened despite the best efforts and care of the nursing home staff. The resident that fell and injured herself was sixty-four. She had chronic diabetes and had been battling that condition for decades prior to when she entered the nursing home in question. Due to that problem, she even needed her left leg amputated. That left her overall health and mobility critically threatened.

On the day that the accident occurred, some nursing home employees were attempting to reposition her in order to prevent the onset of bed sores (also known as pressure sores or decubitus ulcers). Additionally, they needed to refit a brace that was designed to give support to her hip and mid-section.

In the process of these procedures, she rolled over and fell on the floor. She did not seem that significantly injured but facility management decided she should be get emergency medical attention just as a precaution. After she was seen by a doctor at the hospital, she was sent back to the nursing home.

Her subsequent lawsuit sought damages for the direct pain and suffering that resulted from the fall. There was significant prospect of long-term pain, suffering, or disability so the eventual settlement mostly compensated her for the sizable harm that immediately resulted from the incident.

The man who kicked off this legal storm was previously a resident of several other nursing homes. However, some controversy at each of them required him to seek residence in a different institution. Although, the one that started this cause of action was unique. He exited the building and wandered off the premises.

It was not possible to determine where he was headed or what he planned on doing because he was experiencing the effects of Alzheimer’s or some other debilitating medical condition. As he was walking down a main road not more than a mile or two from the nursing home, he fell down over a curb and broke his arm, shattered a rib, and injured his head. The latter injury was the most troubling and frankly the one that cost the most to take of in the hospital and rehab.

When he sued the nursing home, he claimed that his traumatic brain injury would reduce his quality of life and increase his pain and suffering for the indefinite future. It sought damages for this as well as for the related pain, expense, and trauma of the ordeal.

The two sides arranged a private settlement nearly one year after the suit was filed for $450,000.

This plaintiff filed an action after he fell during a rehabilitative session. He claimed that the nursing home employee shoved him aside as he was attempting to complete a procedure and that the force was enough to send him to the ground and cause serious injuries including: broken bones, mental trauma, and disability.

His suit sought compensation for these items including the costs and fees associated with bringing the case in the first place. The defendant facility replied that it was merely trying to assist the resident in the completion of his rehab but it could not argue that it did this without error. This fact made settlement probable and trial unlikely.

The man recovered $160,000 in settlement which was supposed to satisfy the following damages:

It’s not enough to merely scan the nursing home lawsuit summaries above and then move on to another matter. Rather, you should digest them slowly so that you come away with their true concepts. With that in mind, take a look at these takeaways to ensure you don’t miss the point:

Did Your Loved One Fall in a Louisiana Nursing Home?

Attorneys at Nursing Home Law News have worked with and represented many nursing home victims across Louisiana. By far, fall incidents are some of the most common forms of injury that we review and frankly some of the most serious and costly.

If you or your loved one suffered an injury or death due to a fall in a Louisiana nursing home, then give us a call. We can help. We will immediately review your case and determine if you are entitled to recovery under Louisiana law.

Then, if you are entitled to relief, we can bring that case on your behalf at no upfront cost. Just contact our offices. We will begin fighting on your behalf immediately. Your recovery should not wait!