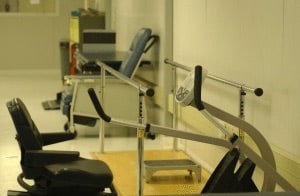 An orthopedic rehabilitation patient who developed multiple decubitus ulcers on his back and heels has filed a lawsuit against the nursing home where the wounds developed.

The lawsuit alleges that Highland Health Care Center (Illinois) and its parent company Covenant Care Midwest failed to implement preventative measures to avoid the development of decubitus ulcers during a short-term admission. The nursing home patient was admitted to the facility for physical therapy and nursing care following a complete knee replacement surgery.

Despite the facilities knowledge that the man had limited mobility due to his recent surgery, the facility failed to mobilize the man and get him out of bed– and perform the physical therapy he was at the facility for in the first place.

The lawsuit specifically alleged the following negligent acts on the part of the nursing home resulted in the patients decubitus ulcers:

The lawsuit is pending in Madison County Circuit Court in Southern Illinois.

In our nursing home litigation practice, we see a significant number of cases where a rehab patient has developed a decubitus ulcer during a short-term admission to a nursing home. The underlying reasons may be varied, but I suspect that because many rehab patients tend to be younger and have an outward appearance that they are healthy, staff in nursing homes may be less likely to encourage them to engage in activity.

Short Term Stays can be Risky

Similarly, short-term stays may result in abbreviated or incomplete ‘care plans’ which set forth with specificity what facilities must do to prevent wounds from developing in the first place. Clearly, by accepting a patient– even for a short term stay– nursing homes must take the necessary steps to ensure their well-being. As we see in the above matter, when facilities ignore this obligation significant problems may result.