The Information You Need to Make Decisions That Matter
The Nursing Home Law Center is committed to providing the
legal resources necessary to hold negligent facilities accountable.
Learn More
Home
Bed Sores in Nursing Home Patients
Bedsore Prevention
Is it Mandatory for Nursing Homes to use Pressure Relieving Mattresses?

Is it Mandatory for Nursing Homes to use Pressure Relieving Mattresses? 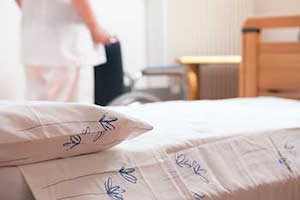 Bedsores, also called decubitus ulcers, result from continuous pressure on skin and underlying tissue. This pressure restricts blood flow, which causes the skin to die and the ulcer to develop. This is not normally an issue as people move around and shift their weight. However, when patients in a hospital bed or a nursing home patient remains immobilized for long periods, they risk damage to their skin and pressure sores can develop.

While immobilization is the classic cause of bedsores, other patients are also at risk. At-risk patients include:

Preventing bedsores requires effort on the part of hospital or nursing home staff. Frequently changing the position of the patient, to imitate the natural position changes of mobile people when they sleep or sit down, is essential. Dehydration is often a factor in pressure sores, so keeping the patient hydrated and properly nourished is important.

A more recent development in technology now offers us a third possibility. Nursing professor Janet Beitz used an algorithmic method based on clinical evidence to develop an effective surface which can prevent or reduce incidences of bedsores.

"A standard mattress is not designed to prevent or treat pressure ulcers because it is the kind of mattress you sleep on at home," she says.

There are pressure-redistributing mattresses that achieve the same result as shifting one's position in bed. Friction management devices can also prevent the breakdown of the skin while others control moisture.

New Jersey's State Bill S-1517 mandates that nursing home operators begin to switch over to pressure relieving mattresses within one year. By three years' time they must have completed the changeover.

Are pressure relieving mattresses required to be used in nursing homes?