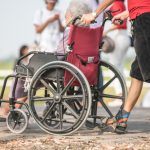 The attorneys at Nursing Home Law News have successfully settled nursing home abuse and neglect cases across Illinois. Many of the cases we work on involve patient injuries such as: bed sores or pressure sores, broken bones from falls, patients dropped by staff members, medication errors or physical abuse.

Unfortunately, in some of these situations, a family member contacts us when an injury has claimed the life of their loved one.

A nursing home abuse lawyer from our office is committed to representing individuals; we do not represent any corporations or businesses.

Why Are Some Illinois Nursing Home Cases Worth More Than Others?

When you review a sampling of our settlements and case results below, you may be thinking about why some cases settled more than others— even when they appear to be relatively similar. While the circumstances of each case are indeed unique, factors, which may increase or decrease the value of a nursing home negligence case include:

In this dispute, an elderly man was transferred to a nursing home for care after undergoing extensive treatments at a nearby hospital. Before being admitted to the facility, his doctors placed a tracheostomy tube in his throat to help his breathing and gave specific instructions to the nursing home staff regarding its care.

However, they did not follow these instructions and the man’s lawyers argued this caused him great pain and suffering and even led to his death. The two parties settled out of court for $25,000 and some of these points might explain why they reached an agreement:

In this tragic incident, an elderly woman in her early nineties claimed that a young nursing home staff assistant raped her. Due to the assault, she sustained various personal injuries to her body including to her arms, back, and face.

The defendant nursing home denied that it happened or that they were not responsible for it if it did actually happen. The jury found for the elderly nursing home resident and awarded her $504,000.

The allegations of this lawsuit claimed that an elderly woman was raped while living at a nursing home by one of its employees.

The cause of action was for negligence and relied heavily on the critique of the facility’s screening and hiring procedures. This was their focus largely because the man alleged of rape had a prior history of committing assault.

Interestingly, the defendant nursing home admitted guilt but disagreed about the amount of injuries that the woman sustained. Both parties agreed to settle for $680,000. Here are some things to note about this case:

This case involved a 72-year-old nursing home resident. He was transferred to the facility after being diagnosed with renal failure, Parkinson’s disease, and brain abnormalities at a local hospital.

While he stayed at the hospital, he suffered from malnutrition and dehydration which exacerbated his original health problems.

Lawyers for the man sued the nursing home and both sides settled out of court for $315,000. Keep in mind the following things when thinking about this case:

This lawsuit kicked off when a 79-year-old woman died in the care of an Illinois nursing home just outside of Chicago.

At the time of death, she was suffering from dehydration, malnutrition, bed sores, and several other serious medical conditions. Her estate argued in its complaint that the nursing home completely failed her with regards to the supervision, resources, care, and other services that it owed her.

It sought damages for her wrongful death, pain, and suffering as well as the lost support and companionship of her next of kin. A jury awarded her $838,000 in damages most likely for the following reasons:

A team of experienced attorneys, paralegals and nurses, carefully evaluates each nursing home abuse case in our office. Each team member works with the goal of determining how and why an incident may have occurred and how we can achieve the best possible recovery for the individual or a family.

If you have a family member that was mistreated in a nursing home across Illinois, we are interested in discussing the circumstances with you.

Our law firm handles nursing home injury cases on a contingency fee basis where there is never a legal fee charged unless there is a financial recovery for you. Begin the process now by completing our case intake form or by calling our office.

If you are looking for information on a local facility or an attorney to help you, please visit the pages below:

For information on other types of Illinois nursing home settlements, please reference the pages below: