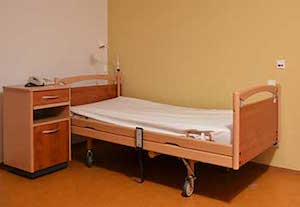 On July 5, 2008, a man with spina bifida was admitted to Sherman Hospital due to an elevated body temperature. While he was there, hospital staff noted his poor oral hygiene and bedsores. His colostomy bag had exploded as well, which had covered him in feces.

The staff reported the situation to the Illinois Department of Health which began an investigation of the facility where the man had been staying, Tower Hill Healthcare Center. The man passed away on July 31, 2008 due to a staph infection and pneumonia. The lawsuit is pending in Kane County, Illinois.

Bedsores are an epidemic in America among the vulnerable population. Studies indicate that incidences of bedsores have risen over the last decade.

Most bedsores are preventable, but this requires the diligence of caregivers. Staff at health care facilities, especially long-term care facilities, need to turn patients, or change positions several times per day. They must keep patients clean and dry and do their utmost to keep their diets healthy.

If they do not, the results can be fatal. Infections due to bedsores are directly responsible for the deaths of 60,000 Americans every year. Most are elderly, but even younger patients can develop bedsores if caregivers do not take proper care of them.

A bedsore, also called a pressure sore or a decubitus ulcer, is an open wound on the body frequently seen in immobile patients. When constant pressure is applied to a body part, the flow of blood is restricted which can lead to the death of the skin and tissue underneath. A wound develops and can broaden and deepen over time if steps are not taken to treat the problem.

Bedsores go through four stages of severity, which doctors can diagnose with a visual exam. If the bedsore is covered in slough, which is the dried, congealed material that can ooze from the wound, it may not be possible to categorize the bedsore. However, the slough acts as a protection for the wound and should not be removed.

The four categories of bedsore severity are:

Who is at Risk for Bedsores?

Contrary to what many believe, bedsores do not afflict just one demographic. Anyone is capable of developing a bedsore, although certain groups are more at risk. The conditions that are more conducive to forming bedsores are:

Where do Bedsores Normally Form?

Bedsores can form on any body part. However, they are most likely to form on parts of the body that bear more weight and thus are subject to more pressure. This can depend on whether the patient is in a wheelchair, a bed or some other device, and in what position the patient remains for long periods of time.

Fat acts as a cushion against the body’s weight, so parts of the body with little fat will more readily form bedsores. Any area that protrudes is more likely to bear weight and therefore will more quickly form a bedsore.

The most common sites for bedsores are:

A bedsore can be a traumatic experience for a patient and his or her family. It can also be fatal. Caregivers need to work more diligently to bring down the incidence of bedsores in America.