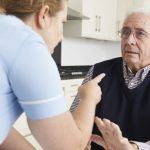 Abuse in any sector of society is intolerable but when it occurs in nursing homes it is especially tragic. Our elderly and infirm need care and protection. Instead, what they get all across Colorado at alarming rates are physical, mental, sexual, and financial exploitation and abuse.

In the next section, we review some Colorado nursing home abuse lawsuits that illustrate the problem of abuse in these facilities so that you have a better sense of what to watch out for if you live in one or know someone that does.

The chain of events that led to this lawsuit are disputed and controversial. The plaintiff claimed that he was getting back into his wheelchair of his own accord when the nursing home staff came up from behind and shoved him to the floor. He broke his hand and elbow as well as endured significant trauma and suffering.

However, he wasn’t only complaining of the home’s conduct. He also claimed that another resident assaulted him and was part of the reason that he fell and injured himself.

His lawsuit sought damages from both of them for the pain, cost, and grief that the entire ordeal caused. Both of the defendants were perplexed. In their reply, they told an entirely different story: the two residents were arguing and the staff tried to break up the affair when the plaintiff accidentally fell down.

In their account, there was no intentional or malicious abuse. However, as the matter got closer and closer to trial, nobody wanted to go to court so they settled and the man got $75,000.

Here are a few reasons why:

This case was a bit unique because the victim of the alleged misconduct was a worker and not a resident but it’s included because it still tells important lessons about nursing home communities.

The plaintiff was a female nursing employee, contracted by the home to provide care to the residents. She claimed that a man working for the nursing facility sexually assaulted her and generally abused her.

Her lawsuit targeted the man for the abuse and the nursing home for negligent hiring, training, and supervision under the theory of respondeat superior.

Also, it claimed that the home had prior knowledge of the man’s propensity to attack because of past instances of similar conduct but didn’t do anything. She sought damages for emotional suffering, pain, trauma, loss of life enjoyment, and related harms. Both defendants shot back with affirmative defenses.

Most importantly, the man claimed that in a simultaneous criminal action for the same event, a jury acquitted him of all charges as it had in the other instance that the plaintiff cited.

However, none of the parties could find agreement before it was put to a jury and it ultimately found for the woman in the amount of $200,000.

Here’s how this case value broke down:

The nursing home injury in this affair was undoubtedly at least partially caused by the resident. The key issue in the lawsuit was whether or not the facility, its staff, or anybody else should also take some of the blame for the man’s injuries.

What happened was a bit disputed but the general dynamic is clear. The man was arguing with his neighbor in the nursing home. They were just outside their rooms in the hallway.

At some point, one of the two men touched the other and that set off a physical confrontation. Then, the man fell to the floor. Nursing home staff got there at this time and put the man in a wheelchair in order to bring him back into his room.

While they were doing this though, they used straps to confine him and these left scars and bruises across his body. However, the man also claimed to suffer a broken elbow as well as emotional trauma from the incident.

He claimed that the resident attacked him and the nursing home abused him as well as negligently supervised him. His lawsuit sought compensation from both of them for these tangible and intangible injuries.

After a few weeks of back and forth, the man received $25,000 in a private settlement.

Here’s some explanation as to why he got what he did:

This case involved a female nursing home resident and an employee. The complaint alleged that the employee sexually assaulted the woman while she was recovering from surgery performed at a nearby hospital.

Due to the operation, she was in a heavily sedated state and immobile. The woman claimed that she awoke to the assault and cried out for help but none came and the man eventually left.

Her suit asked for compensation for the mental, physical, and emotional toll that the incident took on her. Furthermore, she thought that the facility was liable in addition to the employee because of its deficient training and monitoring. Also, she stated that the home knew of the man’s dangerous tendencies but didn’t inform her or the other residents.

The defendant facility denied that last point and then argued that the entire fault should be on the employee because he acted outside the scope of his employment.

However, the jury thought otherwise and awarded the woman $1,250,000 in damages. Here are some critical points about that amount:

This incident happened very quickly but its effects were long-lasting. Nursing home staff were bringing a resident to dinner in a wheelchair when another resident reached out and attacked him. The man punched and kicked him causing severe damage to his face and arms. He broke his arm and permanently damaged his eye.

The aggressor apparently was suffering himself from dementia and Alzheimer’s but had attacked others in the past as well.

The victim sued the nursing home. He alleged that it didn’t provide a safe environment and that its negligence caused his damages including medical bills, permanent disability, and long-term suffering. The nursing home didn’t let the matter get to trial.

Here are some facts to note about this agreement:

After reading the Colorado nursing home verdicts and settlements above, please remember these takeaways if you or someone you know has been abused by a nursing facility.

Was Your Loved one Abused at a Colorado Nursing Home?

Attorneys at Nursing Home Law News fight for victims of abuse in Colorado nursing homes because we believe in protecting the most vulnerable members of society. If a facility or other corporation harmed you or someone that you love, then they should pay to make up the damage that they caused.

Call us today so that we can review the circumstances of your injury and explain what recovery is available. The process is quick and can begin immediately at no cost to you.